Windows Phone has hit double-digits in two European markets and averages 9.2-percent in Europe as a whole, new figures suggest, though Microsoft’s smartphone platform still lags well behind iOS and Android, particularly in the US. Sales of Windows Phone devices – the majority of which are from Nokia’s Lumia range – in the UK and France hit 12.0- and 10.8-percent respectively, Kantar Worldpanel calculates, in the three month period up until the end of August 2013.

It’s the first time Microsoft has seen its smartphone platform spread that way in Europe, though the overall percentage marketshare hasn’t quite toppled into double-digits. Across the top five European countries – the UK, Germany, France, Italy, and Spain – it comes in third, behind Android with 70.1-percent of the market, and iOS with 16.1-percent. 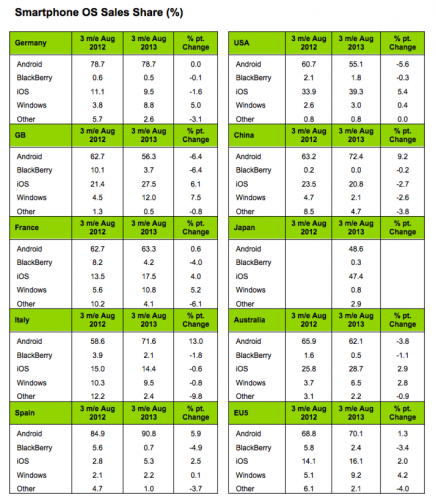 As for which manufacturers are doing particularly well, according to Kantar it’s Samsung that has the lion’s share of sales in Europe at least. Looking only at the five top European economies, the South Korean company holds a comfortable lead, with 47.1-percent of all smartphone sales for the period.

That number actually dipped a little against the same period in 2012, from 49.0-percent, but is still well ahead of Apple in the number two space, with 16.1-percent of Euro sales. Sony, Nokia, and LG all saw slight bumps as well, leaving HTC and BlackBerry the biggest losers.