Cumbersome name; classy hardware. The Windows Phone 8X by HTC owes its awkward nomenclature to a deal that might prove HTC’s salvation and Nokia’s frustration: the company has inked an agreement with Microsoft to make the 8X the “signature handset” of Windows Phone 8, after apparently convincing the software firm that the new flagship suitably “embodied” the OS’ spirit. We caught up with HTC to spend some time with the 8X and to see if we’d end up similarly charmed.

HTC is particularly proud of the design language of its new Windows Phone 8 line-up, based – so the company’s designers say – on the squared-off Live Tiles of the OS’ homescreen, only plumped up and crafted in polycarbonate. Whether or not that convinces you is beside the point; in the hand, the 8X is a solid and tactile shape, legions apart from the bland and bloated lumps that were HTC’s first Windows Phone 7 devices. 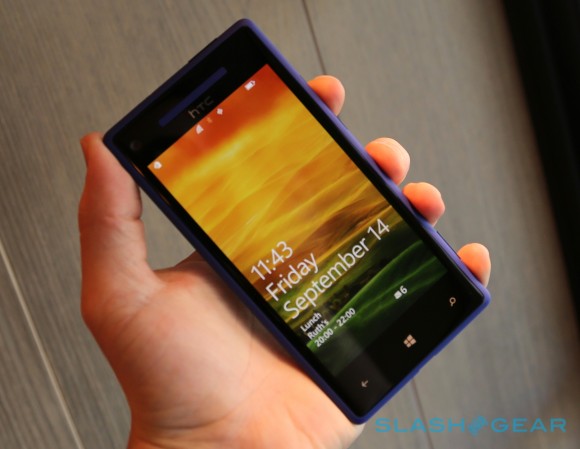 The matte-finish plastic – which will be available in blue, black, yellow, and red, though the red won’t be making it to the EMEA – is easily gripped and the curved edges are comfortable to hold. It doesn’t make for a bulky phone, either, though the 8X is arguably reminiscent of Nokia’s own polycarbonate smartphone range, perhaps more in the way the Gorilla glass smoothly meets the bezel.

Whatever the inspiration, it’s a solid and nicely weighted phone. HTC – or more accurately Microsoft – isn’t allowing anybody to dig any further than the Windows Phone 8 homescreen, but that’s enough to give a glowing impression of the 4.3-inch Super LCD II display. At 720p HD resolution it’s crisp, and the viewing angles are great, aided not least by the optical lamination construction of the display stack itself.

Colors are vivid and blacks (which make up so much of Windows Phone’s UI color scheme) are suitably inky. A bright lockscreen image was the closest we could get to a decent test, which the 8X handled with aplomb. HTC will theme the UI colors according to the handset’s own hue, though that will be user-adjustable if you’d rather have contrast. 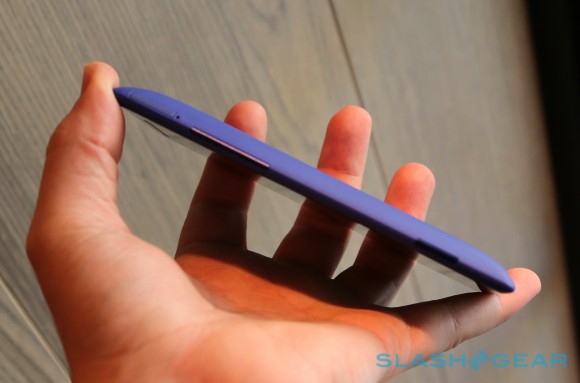 HTC’s specifications certainly don’t single the 8X out as the weak cousin of an Android device. Hardware we’re familiar with from the One X make an appearance in a new Windows Phone guise, with NFC, LTE (for North American models, at least; Europe will have to make do with HSPA+/DC-HSDPA for the moment), a 1.5GHz dualcore Snapdragon S4 chipset, and 1GB of RAM. The decision to bypass expandable storage and instead settle on 16GB of fixed internal memory is unpleasantly reminiscent of Microsoft’s initial limitations on Windows Phone, however, and while we understand HTC was loathe to mar the 8X’s sleek lines, it’s hardly a capacious phone for the sort of power user it’s targeted at.

Happily the camera promises to redeem the 8X somewhat, taking a step ahead of what the One X already offers. The main, 8-megapixel backside-illuminated shooter is paired with an f/2.0 lens and HTC’s own Image Chip processing, while the front camera is an impressively pixel-packing 2.1-megapixel BSI CMOS which can also shoot 1080p Full HD video. HTC is particularly proud of its front lens, too, an 88-degree wide-angle example that can fit four people into a vanity shot. 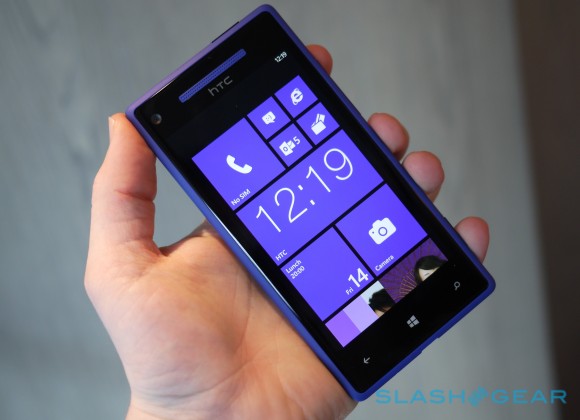 That, along with the Beats Audio tuning that throws not one but two amplifiers at the 8X – one for the boosted headphone jack, the other for the integrated speaker – will have to wait to prove its worth until review samples arrive. If anything, though, HTC has convincingly done its part: delivered an admirable house for Windows Phone 8 to live in. Whether the smartphone – and its 8S sibling – sinks or swims in the marketplace depends on just how good Microsoft’s platform proves to be, and how much heft the software giant puts behind its marketing. At least as the “signature handset” of Windows Phone, the 8X promises to reap the main rewards of the hype machine.