Microsoft has taken the wraps off of Windows Phone 8 today, revealing that the new “Apollo” platform will have a shared Windows core with Windows 8. The shared basis of the two platforms means that Microsoft developers and hardware manufacturers will be able to take advantage of the same code on both Windows 8 PCs and Windows Phone 8 handsets. For consumers, it means more available apps as developers will find it easier to release software for both platforms.

The two platforms will share the kernel, networking, file system, multimedia, and graphics support. The shared core will support multi-core processors, and in fact the Windows Phone 8 core has already proved itself on 64-core servers at the heart of regular Windows machines. 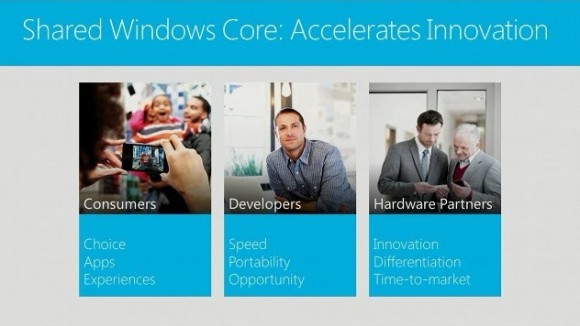 For developers, apps they have already created – or have in progress – for Windows 8 PCs will be readily ported across to Windows Phone 8 devices. There’s also shared security infrastructure, which should come as a relief to enterprise users, and drivers will work on both platforms.

We’ll have more on Windows Phone 8 as the morning goes on.