Hot on the heels of the release of the Project Spartan web browser for Insider testers, Microsoft is now announcing the availability of two more apps for these brave souls to devour. This time it’s the Music and Video app that are getting the preview treatment. Windows Insiders, at least those already running a preview version of Windows 10, can now get the latest versions of these two apps from the beta version of Windows Store. Fortunately for testers, these can be installed side by side the current stable versions, too.

While not as novel as the Spartan browser, the two apps are still somewhat interesting as they give some insight into Microsoft’s vision of “universal apps”. These are apps that are designed and developed to run on Windows 10, no matter the form factor. A sort of “write once, run anywhere” deal, at least as far as Windows 10 devices are concerned. That said, these versions are specifically targeted at desktop and tablet devices, with the phone version nowhere to be seen.

The most immediately visible change is the color scheme, matching Windows 10’s lighter motif. Functionality-wise, the basics are in place, which basically means being able to play music and videos. The new Video app even supports MKV out of the box. Where they get their content from, however, is a different question. Aside from local files, the apps have a variety of Internet sources to draw from. The Music app already supports both OneDrive and Xbox Music Pass collections. The Video app, on the other hand, can also grab videos that have already started playing on some other Xbox Video device. 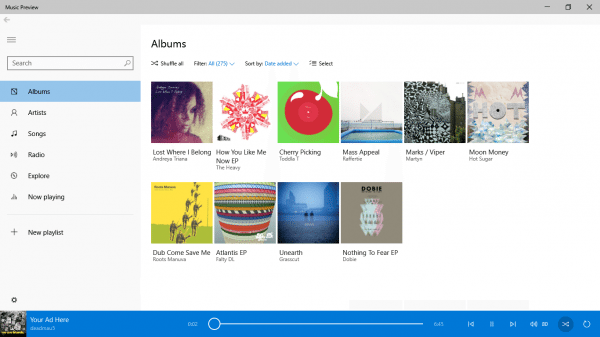 That said, almost everything else is a work in progress. Buying music and videos, for example, are still not supported on the Windows Store beta. Luckily you can still buy from the old Window Store. The Video app is a special case though. Files downloaded from older, non-Windows 10 versions of the app can only be streamed on the Video app preview, which adds a bit of inconvenience. There are still some missing functionality and at times even showstopper bugs. The tradeoffs of being an early adopter.

If you’re a Windows Insider, you can download the Music and Video app previews from the links below. Microsoft has not yet hinted which apps it will decide to put out next, but we are most likely to see a bunch of them before BUILD starts later this month.