When you plug your Windows 10 smartphone into a large display in the near future, you’ll have a full desktop in front of you. This system goes by the name Windows 10 Continuum – for phones. This system connects your phone to a display larger than your phone’s built-in display and has you connect to devices like wireless keyboards and mice to control a desktop user interface just like you would any far larger PC. It almost seems to good to be true.

To be clear, this isn’t the first time this sort of system has been attempted. We’ve seen many tablets connecting to keyboards over the past year, and systems like NVIDIA SHIELD converting into TV-friendly consoles.

We’ve even seen Motorola attempt a desktop user interface with Android all the way back in late 2011 with devices like the Motorola Lapdock 100.

Now it’s time to get super serious with Microsoft’s attempt.

Opening Excel documents, running through slides with PowerPoint – and basically accessing the rest of Office too. This is all made possible with a tap-friendly interface. 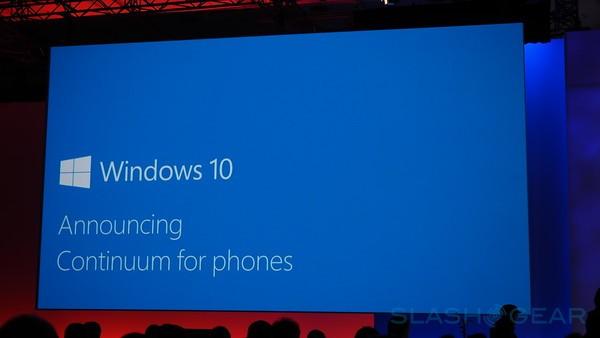 But everything appears to be available from the start here in this earliest demo of Continuum. Connecting your device wirelessly seems just as plausible as connecting with an HDMI cord.

Continuum was spoken about onstage this week at BUILD 2015 by Joe Belfiore. He suggested only that “this capability will require new devices that can drive dual-screen, and you’ll year more about them at a later time.”