Will.i.am’s smartwatch has been officially unveiled right on time, and it’s called the Puls (“pulse”). We’ve heard bits and pieces about the smartwatch over this past year, and it was originally expected the device would be available this summer. That didn’t pan out, but is of little matter now, with the smartwatch finally be rolled out and (some of) the pertinent details with it. Among other things, the smartwatch can be used independent of a smartphone, and will be available to those in the United States via AT&T.

Because the watch can be used without a smartphone, users can use the wearable to make and receive calls directly from their wrist. As you can see from the images, the Puls is more cuff-shaped than watch-shaped, with a curved display of slight proportions. The wearable runs a forked version of Android, according to the WSJ. 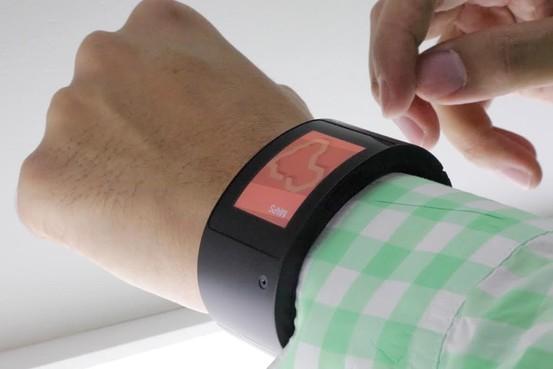 Unfortunately, during the Puls’ unveiling at the Dreamforce conference tonight, precious few details about the hardware were revealed, save that it has a Qualcomm Snapdragon under the hood. The wearable will be able to run five hours on a charge, which won’t take you through the workday but is decent enough.

Included with the watch is a voice-based digital assistant called AneedA (made in collaboration with Nuance), which is a clever play on words. How much the smartwatch will cost and when it’ll be available has not yet been detailed. For those in the United Kingdom, you’ll be able to get the wearable through O2.