Gaming tablet Wikipad is getting OnLive cloud gaming support, with access to the recently announced OnLive CloudLift games subscription service that’s mapped to the slate’s physical controls. Meanwhile, in the pipeline is similar support for Wikipad’s Gamevice, which aims to give other manufacturers’ Android tablets gaming controls too.

For the Wikipad, there’s a new version of OnLive’s Android app which adds in support for the 7-inch tablet. It has a Tegra processor and runs Android, but more importantly has controls like two analog sticks, a D-pad, action buttons, and triggers.

However, more interestingly perhaps than the Wikipad – which is beginning to look a little long in the tooth – is the OnLive compatibility with the company’s upcoming Gamevice.

Announced back at CES in January, the add-on controller snaps around an existing tablet, and in the process gives it a range of physical buttons and sticks. As well as dual analog joysticks and an analog D-pad, there are four analog action buttons, and L1/R1 and L2/R2 triggers.

By relying on OnLive’s remote processing, the actual power of the tablet in-place is less important than the strength of your wireless connection. Full PC-quality games – like Injustice: Gods Among Us and LEGO – The Hobbit – can be played, effectively using the tablet as a display rather than relying on its own GPU and processor.

Gamevice is expected to arrive later in the year. 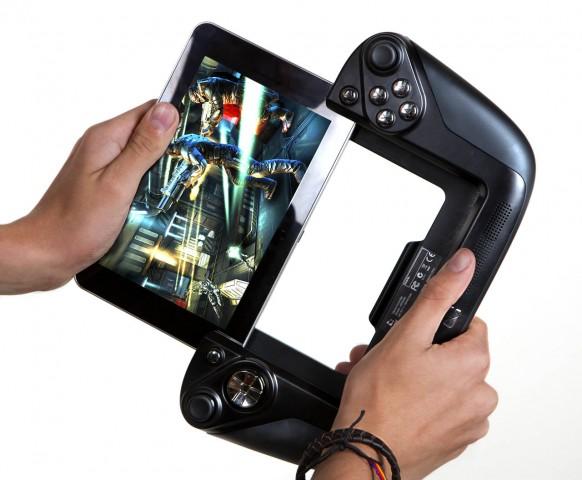