Why VR is the future of gaming, Part 2: Toybox and human interaction

After the demo ended, and I talked for a moment with the various people from Oculus that came in to greet me, I was whisked away to another private room, for a very different demo. The person with me informed me that I would be checking out something called Toybox. I hadn’t actually heard of this particular demo yet, so I was intrigued. (It’s actually been around since October of last year.) Though I’ll admit that I honestly didn’t think it would be all that interesting, as it sounded like I’d just be playing with simple toys in VR. As it turns out, that’s exactly what the demo was, but I couldn’t have been further from correct with my expectations.

Why VR is the future of gaming, Part 1

I don’t recall the last time I sat down and played with simple building blocks and other toys. It’s been a very long time, and I’m pretty sure whenever it was, my enjoyment level was mild at best. Still, I was happy to experience something new, so I went in the room, and got suited up with the headset and the Touch controllers.

Before the headphones went on, someone informed me that I would be interacting with another person, who wouldn’t be in the room with me. Sure enough, a moment later, I was standing at a table surrounded by toys, and across from me was a disembodied head and a pair of hands. She introduced herself, and offered a fist, which I happily bumped before even really thinking about it. That’s right, my first interaction with another person in VR was a fist-bump.

After talking for a moment, she asked if I could help her with something. There were some blocks in front of us, which formed an arch. She asked me to pick up one side of the arch from the bottom block. She would do the same, and we would see if we could lift it up without the whole thing toppling over. We were successful, for a short time. After a couple of seconds it did come crashing down, and we had a good laugh about it. 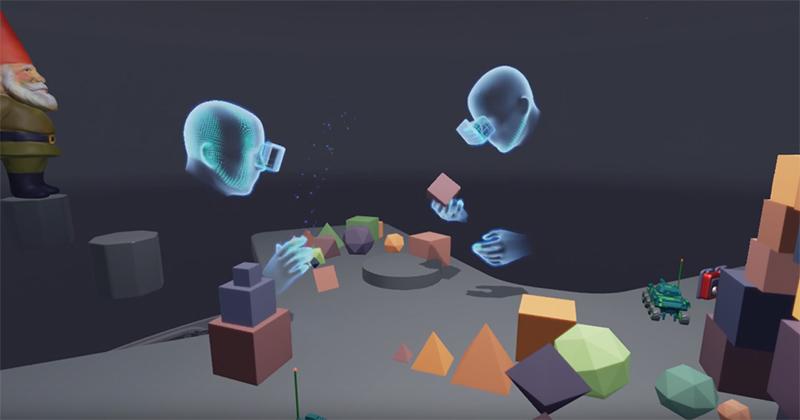 I spent a little time stacking up some other blocks, only to purposefully knock them over. After clearing away the blocks, we tried our hand at some ping-pong. First, we practiced bouncing a ball on the paddle, and then moved on to hitting it back-and-forth. This proved to be more of a challenge than you might think, but we still had a good time.

Next came the fireworks. On the table beside us were some sparklers, a few Roman candles and a lighter. We started with the sparklers, which we used to write our names in the air. Then, we each lit a Roman candle and pointed them at each other, and then to the other areas in the room. At some point she handed me a small red cylinder with a very short fuse that was sparkling. As you can expect, it blew up in my face just a few short seconds later. Once again, I found myself feeling like Wile E. Coyote.

We finished off our fireworks fun by bundling up the remaining Roman candles and setting them all alight. I was then treated to a nice little fireworks show.

She then moved around to a different part of the table, so that she was more beside me, rather than in front. Where she had been standing before was now a shooting gallery, much like you’d see at a circus or amusement park. There were lots of moving targets, and a few stationary ones. I picked up a slingshot, and picked off a number of them. Just like with the Bullet Storm demo, I found that I already knew how to use the simple weapon. I grasped it with my left hand, aimed it, and pulled back with my right hand. It felt as natural as shooting a real slingshot.

After a minute, she handed me a boomerang, which I practiced throwing and attempting to catch. After a dozen tries, I was able to snag it on the return. Then she traded me the boomerang for some sort of ray gun. She would then throw the boomerang, and I’d try to shoot it out of the air. It was amazing. 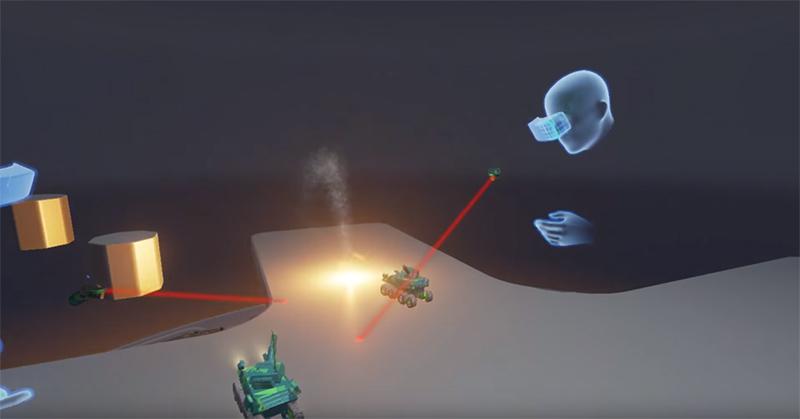 Later, she pointed out a remote that was sitting on the table, which controlled a small toy tank. She also had one, and we carried out some miniaturized tank warfare, as we drove them around and attempted to blow the other up.

At some point during the demo, she said something that made me look over, and she shot me with a different type of ray gun. Instantly, everything in the room became gigantic. She had shrunk me! To add emphasis to the effect, her regular, soft voice became a thunderous booming sound that rang throughout the room. She then picked up some sort of alien puppet, and dangled it in front of me, menacingly.

Now let me tell you something. I’m 31 years old, and I can’t recall ever being even mildly freaked out by a puppet. When she shrank me down, and used the puppet to talk, and then pretend to eat me, I was uncomfortable to say the least. It wasn’t pants-wettingly scary, but it was very unexpected, and for a split-second, I felt like I could be in real danger from this terrifying puppet thing. But again, it was all in good fun.

She did return me to my original size, and I had my revenge by shrinking her in kind. Though she was probably expecting it far more than I was. 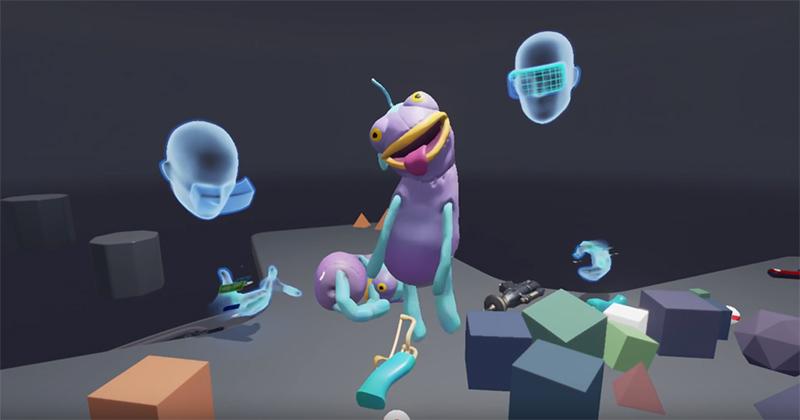 In all, I spent probably 15 minutes playing around with random toys, with my new friend. I’m sure I’ve missed some of the toys that I played with, but you don’t need to hear about every little thing I did. There were robots, puppets, building blocks, ray guns and more. I genuinely felt as excited playing around with these things as I did when I was maybe 6 years old. And the best part was that I had a friend to play with.

But as we were winding down the demo, that’s when it hit me. There wasn’t anyone else in the room with me. Yes, there was someone supervising the demo, by the computer. But my new friend that I’d spent the last 15 minutes hanging out and playing with wasn’t right next to me at all. She wasn’t in the same room, and I’d never actually seen her in-person.

That realization blew my mind. After all the things we’d done together, and how we’d physically interacted with each other (handing things off, the fist-bump, picking up that archway together), I had completely forgotten that this person wasn’t in the room with me. And that was an amazing feeling.

I have a brother who lives on the other side of the US, that I rarely see. We “spend time together” by playing PC games online. We’ll chat on a headset and drive around in GTA or shoot some baddies in Battlefield, all while talking on a headset. It’s a nice way to keep in touch, but it never feels like he’s here in the room with me while we’re playing. But VR will change that. It will bring us closer to people in other locations in ways that we have never been able to achieve before. 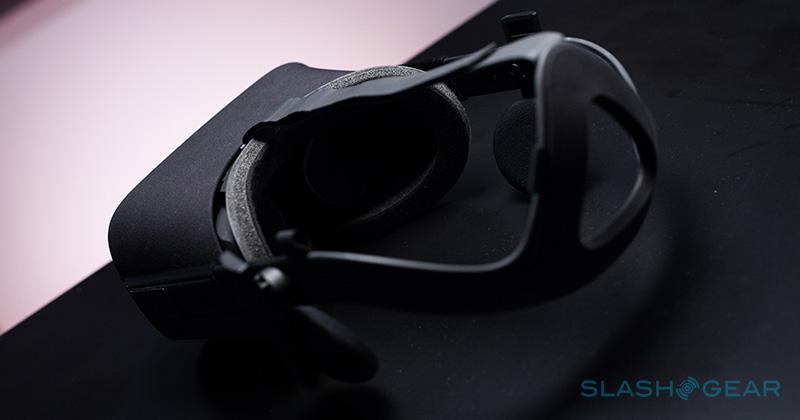 You’ve probably had a video call via Skype or Facetime before, but it’s very obvious that you’re talking to a screen. Perhaps for a brief moment you’ll feel like you’re connecting with the person on the other side, but that’s gone in a flash. With VR, I felt like I had met, and hung out with someone in just a few moments. And only when it came to an end and I was taking off the headset did I realize that I had no idea where that person even was. They could have been back at the Oculus HQ playing with me, for all I knew. And that was a perfect stranger. I can only imagine how real it will feel when I’m hanging out with my brother, or a friend that I know well.

After taking off the headset and controllers, and explaining to my helper how strange it was to realize that the other person wasn’t actually here, my virtual friend popped her head in from the other room. She shook my hand and we laughed a bit as I told her that I had forgotten that we werern’t actually standing next to each other the whole time. Unsurprisingly, she told me that this was a pretty common feeling that people experienced when they tried out the demo.

I said that the Bullet Train demo was the most incredible experience I’d had playing a game. And that was true, until I tried out the Toybox demo. While I would definitely see myself playing something like Bullet Storm for hours on end, the Toybox demo was able to show me something altogether new and exciting about VR.

While in the Toybox demo, I once again felt as though I were really in a different place. I was in that room, playing with those toys. But this time, I was able to connect with another person, and completely believe that they were standing right there with me. After all, we could talk, and interact in natural ways, just as I would with someone that was physically in a room with me.

This is where we are headed, as an industry. We’re heading toward a future where we really do immerse ourselves into games, and instead of learning complicated controls, we simply interact with our environment in natural ways. We’re going to be able to share experiences with people all around the world, and while we’re playing, we will feel as though we are right next to those people, going through those experiences together.

We’ve all heard about virtual reality for decades, but it’s here. The technology has finally reached a point where we’re able to trick our minds into believing that we’re somewhere else, with someone else. No, it’s not perfect. There are bugs to be worked out, and new methods of input that we haven’t yet explored. But it doesn’t need to be perfect to be immersive.

We have a number of different companies working on the VR hardware that is going to lead us into this future that I’m seeing. The only thing holding us back now are the releases of the major headsets, and the content for them. It will probably still be some time before we see titles that will completely embrace this new technology. However, it is coming, and it is definitely the future.