Why VR is the future of gaming, Part 1: Oculus Rift and Bullet Train

Earlier this month I was with the rest of the SlashGear team at CES, and as you no doubt saw, VR had a big presence at the show. I was able to test out various VR offerings from different companies. Everything from Google Cardboard up to the Oculus Rift. While I enjoyed trying different things out, it wasn’t until the last hour I was at the show that I began to truly understand just how much VR will change the way we play games.

Virtual Reality is a concept that’s been around longer than I have. My first experience with it was Nintendo’s Virtual Boy, which was hardly VR. I remember being disappointed, because it was just a video game that was uncomfortable to play. At no point did I actually feel like I was controlling Wario, which is the whole point of VR.

A couple years back I was able to get a demo of the Oculus Rift, and it was interesting. I could float around inside of the Tuscany demo, but that’s all there was. The only time that I really felt like I was “in” the game, was when I floated up a bit, and looked down. For a split second, I felt like Wile E. Coyote, as he looked down and remembered that gravity was a thing. Aside from that, I still felt like I was at a computer running through the same demo, but with something heavy on my head.

My first taste of the “modern” VR headset was from HTC, with their Vive. I only was allowed a few minutes to play with it, and again, it was only a tech demo. Once I was strapped in, I found myself at the bottom of the ocean, aboard a sunken ship. Going into it, I wasn’t expecting much more than the same sort of experience I’d had with the Tuscany demo. 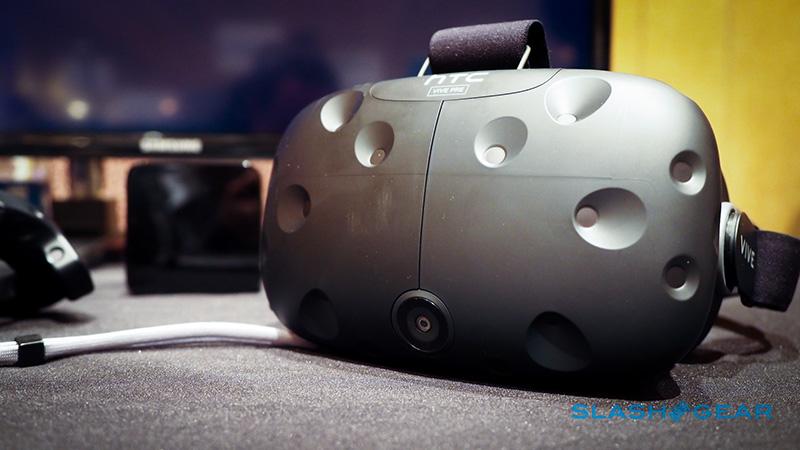 I was definitely surprised by the underwater demo, because there was something that I had been missing during the Tuscany one. Specifically, I could move. I could actually walk around and look at things. When I got too close to the edge, the grid-shaped outline would appear and warn me. It reminded me a lot of the holodeck on Star Trek, which I thought was pretty cool.

I hung out underwater for a bit, as fish swam around my head, and eventually a whale came over to see what was going on. I felt as though I could reach out and touch it. Unfortunately, that’s where the immersion broke. I was just standing in a demo, which wasn’t reacting to my presence at all. It was an incredible experience, but still just a novelty in my mind. It was still missing elements that I desired in VR.

The final day that I was at the show, I had a chance to meet with the guys at the Oculus booth, and get a proper VR experience. They had time to show me three different interactive demos. The first was Bullet Train, which I’d seen videos of before. Being a fan of the FPS genre, I hadn’t been terribly impressed with the Bullet Train videos online, but I went in with an open mind. The lady assisting me got me strapped into the headset, and helped me with the Touch controllers.

As soon as she helped me put on the touch controllers (by put on, I mean the wrist straps), I had my first truly immersive VR experience. The game wasn’t even loaded up, and I already knew that I was no longer just standing in a room in the middle of a huge convention hall. I looked down at my hands, and could actually see them in the headset. Sure, they were just digital representations of a left and right hand, but they moved just like my own hands were in the real world. I could point, make a thumbs-up, and a fist, and I would see these things happening. It was an amazing thing to do, for the very first time.

I was still waving my hands in front of my face when she loaded up the game. I found myself standing on a train, and my hands were still right there with me. I learned that I could teleport in the game, which was neat. But then I was instructed to pick up a gun, and that was when I had the closest thing to a religious experience that I’ve ever had in a game. I picked up the gun, and aimed down the sights, and it felt real. I felt like I was in the game, holding a gun, and shooting it. Once the doors opened, I started shooting things, and it was amazing. It did take a little bit to get the controls down, but aiming the gun and firing were the most natural things to do. I even found myself closing one eye, to get a better aim (which worked, by the way).

A few minutes later, I was slowing down time, dodging bullets, and even plucking those same bullets out of the air, and throwing them back at the enemy. I was laughing maniacally as I did so. I felt like some sort of god, able to control the world with my thoughts. Because that’s what all of my senses were telling me. I was in control of time and space, I could teleport behind someone and surprise them point-blank with a shotgun.

After having a lot of fun and learning the ropes, suddenly the gunfire stops, and a huge robot crashed through the ceiling. Naturally, I point my gun and start firing away. But nothing I did had an effect. Here I was convinced that I was the master of this world, and something just crashed in and ruined my party. I felt intimidated, and a little scared.

Sure, some games will get my heart racing during a boss fight, but never like this. When you become immersed in a game this much, it can feel very real. In the back of my mind, I knew that I was just in some room with a thing attached to my head. But my instincts were telling me that I was in danger, and I needed to figure out something, fast.

When it fired its first volley of rockets at me, I quickly teleported to another area (there were designated teleport locations in the demo) to regroup in safety. Then I remembered that I could slow down time and pluck bullets out of the air, so why not do the same with rockets? I’m pretty sure the maniacal laughter returned.

I waited patiently for the bot to reposition itself and fire. Once the rockets got close, I slowed down time, grabbed a rocket and teleported to an area just below the bot. I chucked the rocket upward, and watched as it hit its mark. I repeated those steps with a bit of variation, and a minute or two later, my foe was defeated, and the demo ended.

As the lady helped me with the controllers and the headset, my heart was still racing. I could have played that for hours, and found new ways to enjoy it. A few more people from the Oculus team joined us in the room, with all of them asking “how was it?” or “what did you think?” I was sure to thank each one of them, and told them that it was the single most incredible experience I’ve ever had playing a video game.

I’ve had almost two weeks to reflect on that statement, which wasn’t one that I would make lightly. After all, I’ve been hooked on video games ever since I saw Mario running across the screen of my parents TV back in the late 80’s. I’ve thought about the first 40-man raid that I ran in World of Warcraft, the time I got to challenge Fatal1ty to a game of Quake (and got my ass handed to me by the master), and every other great moment in gaming that I’ve experienced over the last 25+ years of my life.

After all of that reflection, I stand by that statement. It was definitely the most incredible gaming experience of my life, at that point. However, there was one other moment that was roughly on par with playing Bullet Train on the Oculus. It came directly afterward. But I’ll save that story for Part 2 of this piece, which will be up later next week.

UPDATE: Part 2 is live, check it out here.