Why the Internet is mad at CNN right now

This week there was a bit of a firestorm surrounding the posting of meme-like content on Donald Trump’s Twitter feed. A Reddit user apparently created a GIF which showed Donald beating up a wrestler which had a CNN logo for a head, then took credit for it once it was Tweeted. The folks at CNN’s KFile went to find the Reddit user and write a story about him – that’s where things get messy.

“The Reddit user who initially claimed credit for President Donald Trump’s tweet that showed Trump tackling CNN issued an apology Tuesday for the video and other offensive content he posted,” wrote KFile, “one day after CNN identified the man behind the account and attempted to make contact with him.”

“On Monday, KFile attempted to contact the man by email and phone but he did not respond,” wrote KFile on CNN. “On Tuesday, “HanA**holeSolo” posted his apology…”

In the past, the user HanA**holeSolo from Reddit was quite the troll – this can be confirmed through the Archive Wayback Machine. There you’ll find hate speech in abundance and no regard for the people he might hurt. This is all addressed in a massive text block (by Reddit’s average post-length standards) which I’ve pasted into an image below: 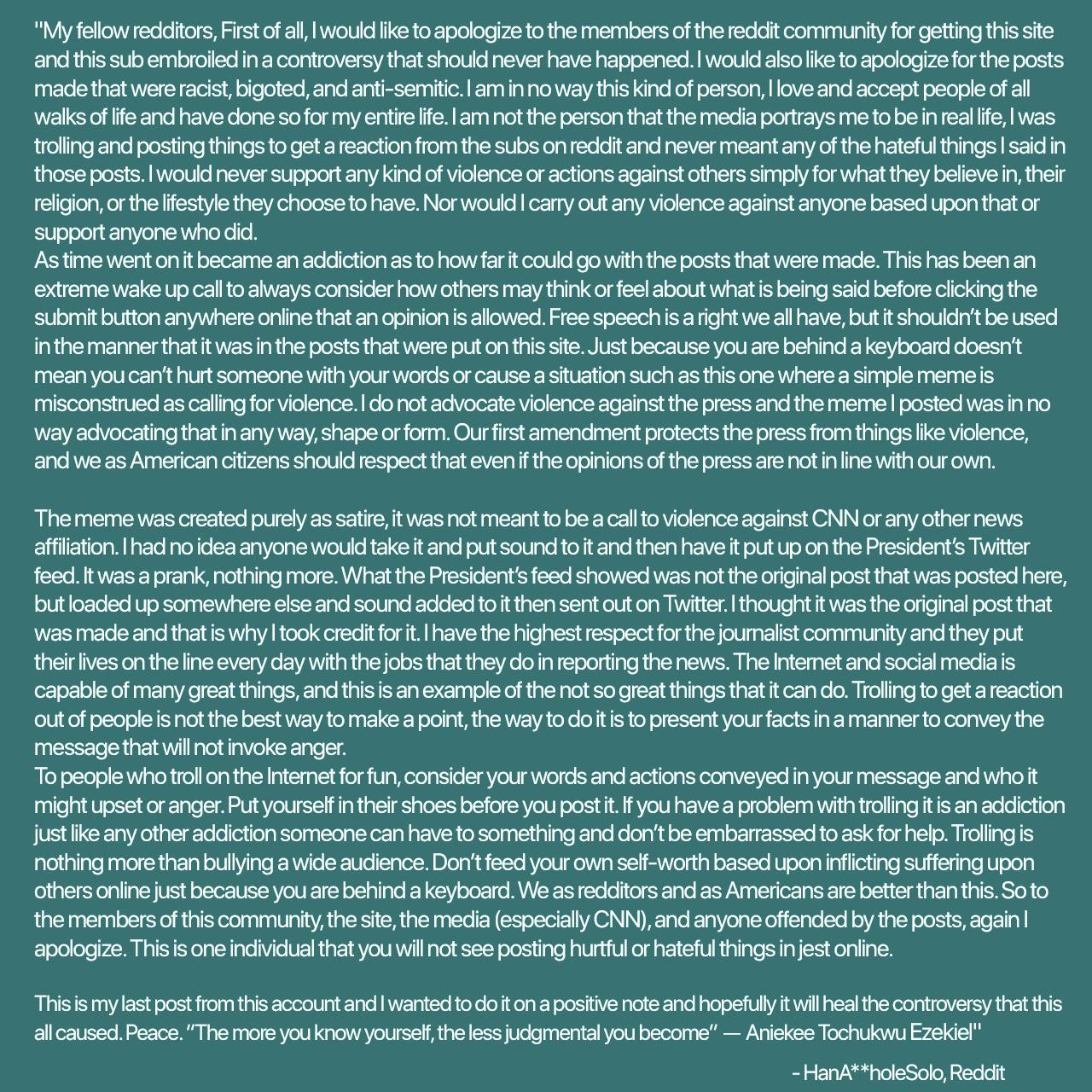 The next part of this saga has become a bit garbled. Because of the way CNN worded their article, it seemed that they might have been blackmailing the user. Identifying an internet user who would otherwise represent themselves on the internet under a pseudonym is also called “doxing”.

Above you’ll see more words from the CNN article in question. The part that seems to have bothered readers is the big where KFile gives their reasons for not publishing the identifying information they found about HanA**holeSolo. Almost as if CNN is trying to appease readers who would otherwise demand the information they acquired.

The most befuddling bit of this part of the CNN article is the assertion that they wont publish private information “because he said he is not going to repeat this ugly behavior on social media again.” Almost as if CNN is an authority figure and HanA**holeSolo is an apologetic child, promising he wont hit anyone again as long as he gets his baseball bat back. 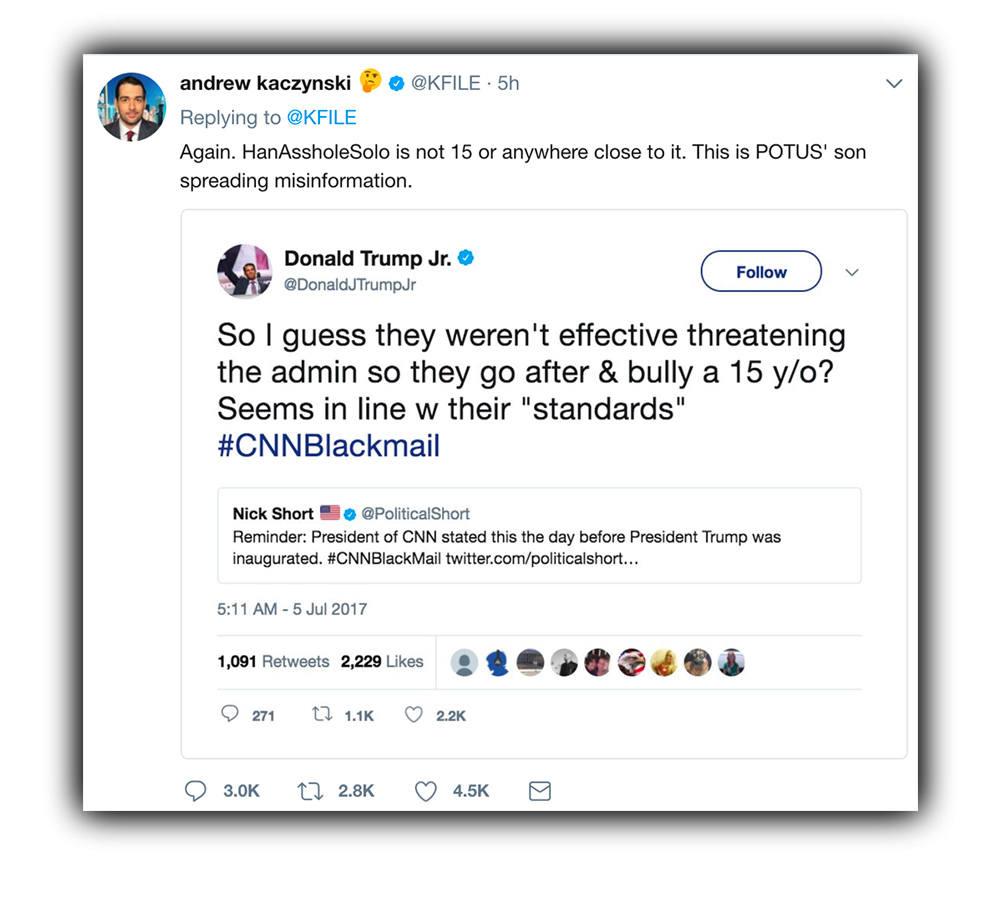 Since then, users like Donald Trump Jr have spread a false bit of information: that the user HanA**holeSolo was a 15-year-old kid. A person being that young means CNN is a bully, apparently – so said Donald Junior. Rumor also circulated that the words CNN used in their article meant that they’d made a “deal” with HanA**holeSolo.

*Above you’ll see the latest statement from CNN on the matter. In it, they suggest that the user is an “adult male” and that the actions HanA**holeSolo took with regard to apologizing and deleting his account, etcetera, were all taken before speaking with CNN on the phone. After the statement from CNN was shared, HanA**holeSolo apparently called @KFile again, saying the following.

“I am in total agreement with your statement,” said HanA**holSolo. “I was not threatened in anyway. I hope it does serve others as an inspiration to stop.”

The most likely situation is that Reddit users, not CNN, discovered the identity of of HanA**holeSolo first. While CNN’s KFile might be fast, there’s no entity faster at finding the source of an image or a video than the hive mind that is the internet itself. Users from communities like Reddit almost certainly had HanA**holeSolo’s identity, Facebook page, family member names, phone numbers, addresses, and shoe size within hours – or even minutes – after Donald Trump posted his remixed version of the original GIF.

Something along those lines wont likely be made public – that’s the sort of thing you don’t let anyone know when you’re on the receiving end. The possibility of getting doxed by anonymous users is extremely scary – especially if you’re in HanA**holeSolo’s position where a his own safety and the safety and privacy of his family were at stake. There’s a Black Mirror episode about this too – Black Mirror: “Shut Up and Dance” (Season/Series 3, Episode 3) – particularly mind-breaking, that is.

But it’s easier to blame CNN for coercing HanA**holeSolo into hiding because it’s out in the open – and they certainly weren’t very careful in avoiding getting called out in the first place. As it reads today CNN’s article only really serves to give the news organization a pat on its own back for “finding” HanA**holeSolo in the first place – even though finding this fellow was akin to Christopher Columbus “discovering” America.