Why I pre-ordered the new Apple TV

So, why did I decide to go against my better judgement and buy a device that I just don’t like? Two reasons: it’s cheap and I have some hope for the future now that the device is not a “hobby.”

The fact that Apple is able to offer its new set-top box for just $99 tells me everything I need to know about the hardware company. Apple is feeling pressure from the Google TV and it realizes that investing in a decidedly “Apple” idea just doesn’t make sense at this juncture.

So, rather than cannibalize the Mac Mini, which is a fine set-top box, the company instead decided to create something for those of us who want something simpler. And in the process, it sold us on a device that, for all intents and purposes, is an underpowered alternative to just about everything else.

But for some reason, that didn’t matter to me as much as I thought it would. See, I like the idea of being able to pay just 99 cents for a television show. And although the selection isn’t as nice as it could be, I still have Netflix to fall back on when Apple’s offering doesn’t deliver what I’m looking for. 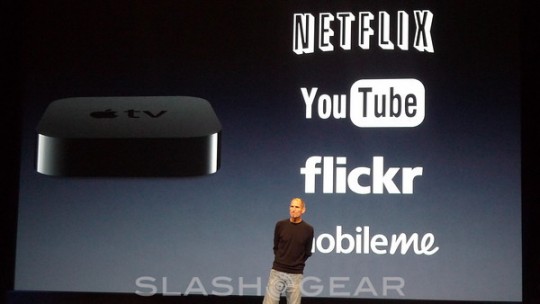 I’m also intrigued by the potential that AirPlay has. Sure, right now I can just stream content from other devices in my house to the Apple TV, but what if Apple does something truly revolutionary with AirPlay? The way Steve Jobs was talking, that seems more possible now than ever. And to be honest, I don’t really need my music on every device in my house if I can stream from one of the others.

And then there is the possibility of multi-room entertainment. Say what you will about the Apple TV, but its aforementioned cheap price makes it an ideal choice for those that want access to streaming content in the living room and all the bedrooms. For just $100 per room, just about all the entertainment content consumers want can be had. And as more consumers see that, Apple will be able to tout sales figures, which will then get the rest of the TV networks onboard. And when that happens, the Apple TV will be even more of a viable device.

So, maybe it’s just me, but I have faith in Apple products. And although the Apple TV won’t win any innovation awards out of the box, I think it has the kind of potential that other devices just don’t.