Behold this absurdly massive action figure, and cower before his retro reboot mightiness. This is the 2017 edition of Trypticon, a Transformer chosen to be reborn by the fans themselves. It was back in 2015 that Hasbro asked fans to choose between Omega Supreme, Scorponok, and the king monster big-boss hunk of t-rex you see standing before you. Today we’ve got the real-deal result of that fan interaction, the mighty, mighty 2017 edition of the city-sized t-rex TRYPTICON.

This dinosaur transformer is the biggest bad-guy in the Transformer universe (depending on who you’re asking) – especially if you’re looking to the early video games to give you guidance. Despite his kingship’s obvious excellence, he only had one physical toy representation before now – his 1986 debut. Look how scrawny he was!

What a tragedy when his true form was obvious in the minds of all those who’d experienced his fury in many a classic video game. Transformers Mystery of Comvoy came in 1986 for the Family Computer with Trypticon as the big boss! He returned in the 1987 Famicom Disk System game Transformers: The Headmasters! 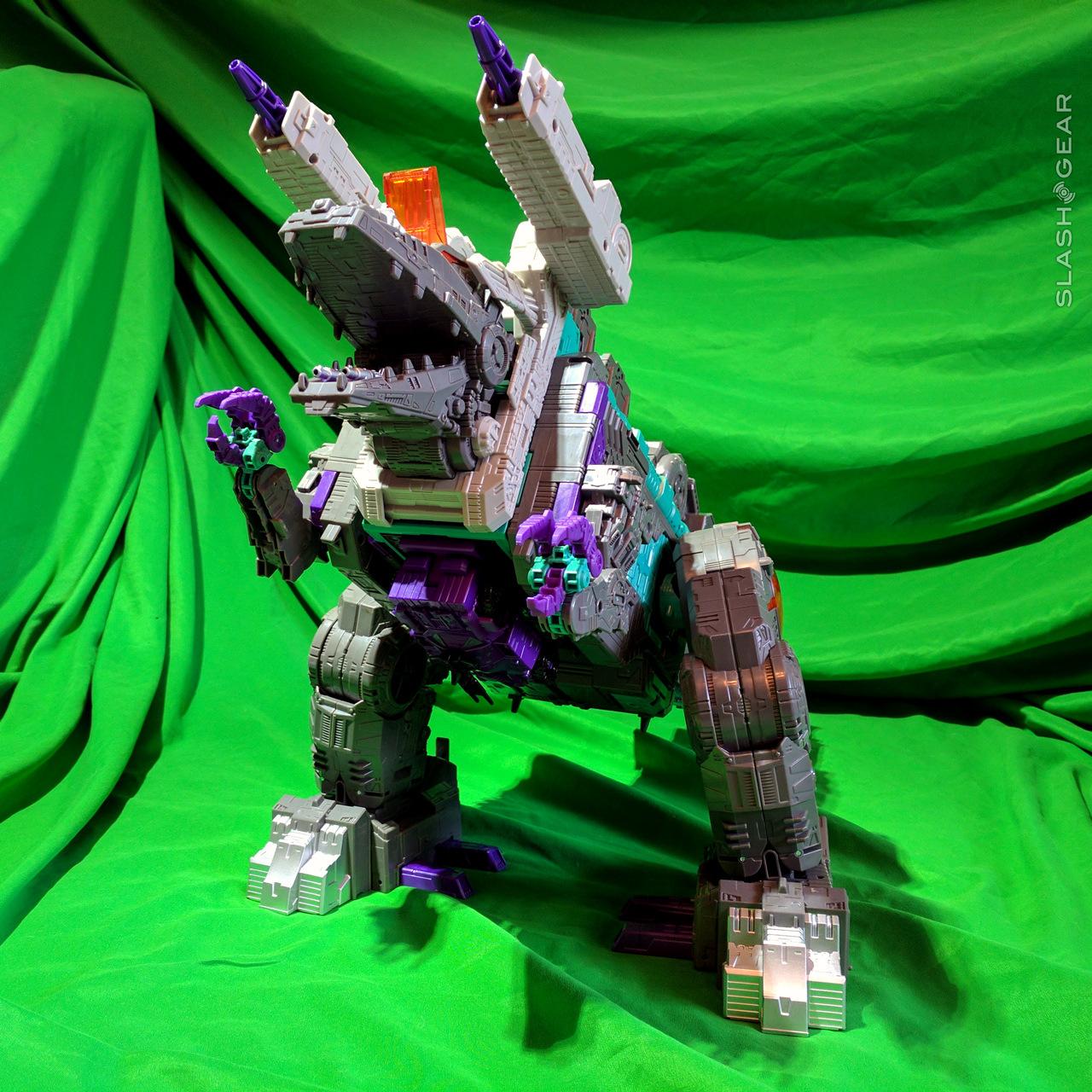 The biggest Transformer currently is the “Transformers Generations Titans Return Titan Class Fortress Maximus” at a standing height of just over 24-inches in Robot Mode. Fortress Maximus and Metroplex (less than an inch shorter at his highest, 2013 edition), are the biggest Autobots in the Transformers toy universe. But now there is Trypticon! Finally, evil returns to the global battlefield – as the most massive Decepticon ever!

Trypticon is now the tallest Decepticon – and likely the biggest Transformer if we’re talking about sheer THICC-ness. Each of these massive monsters are Cityformers – city-sized Transformers large enough to hold the smallest figures in the series. In fact this toy’s mouth opens up to allow him to “eat” Titan Master figures, one of which is included in the box. 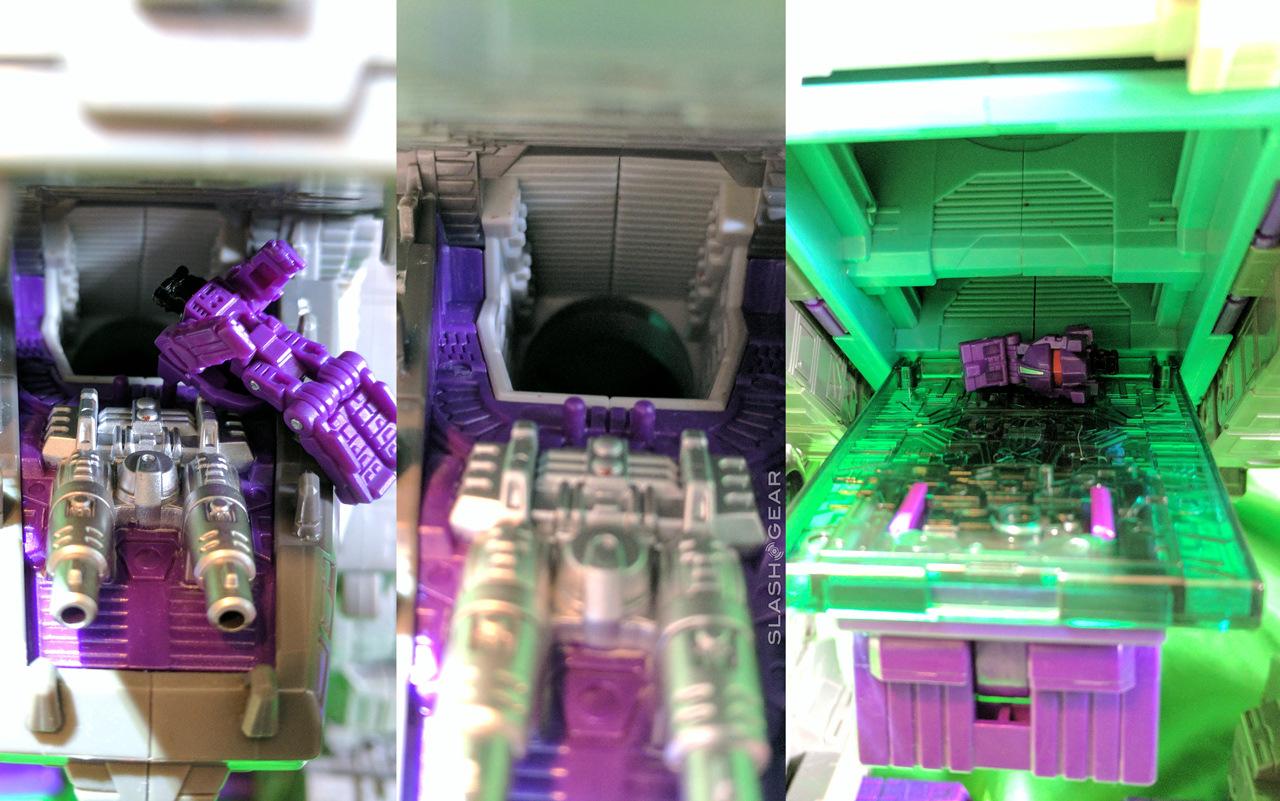 Above you’ll see the Titan Master in the mouth of Trypticon. Down his throat he goes, and out his belly he returns. Or he can just stay in there and hang out – this is a City Bot after all. 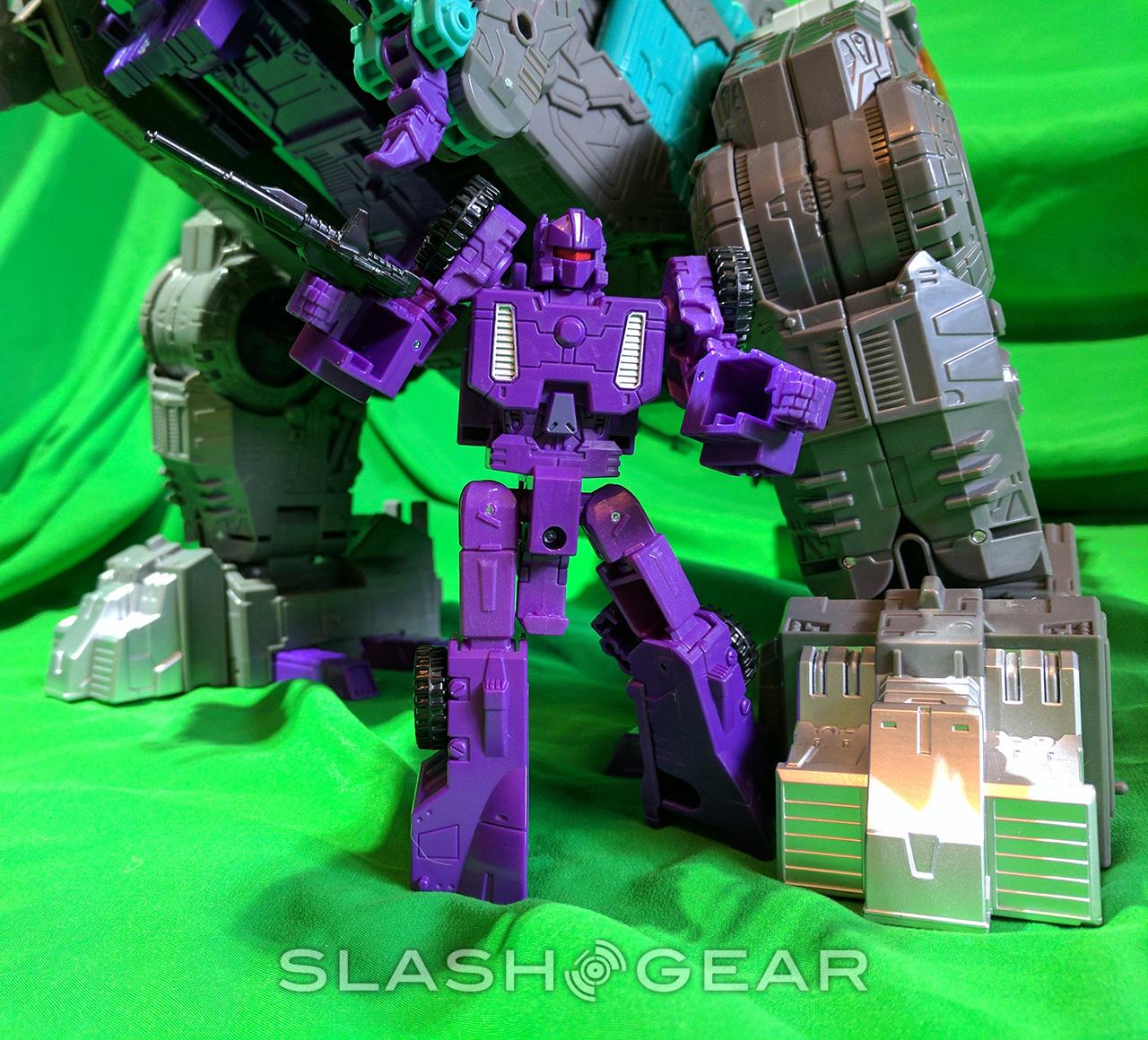 Of note: Wipe-Out’s arms are on ball hinges and, while versatile, are prone to easy popping off. The arm that pops off is shorter than a keyboard keycap. Wipe-Out (aka Necro) folds down into the head for two reasons. One, to be the head for Full-Tilt, and two, to fit in to the back of the head of Trypticon – which is then a button which pops up Trypticon’s head gun. 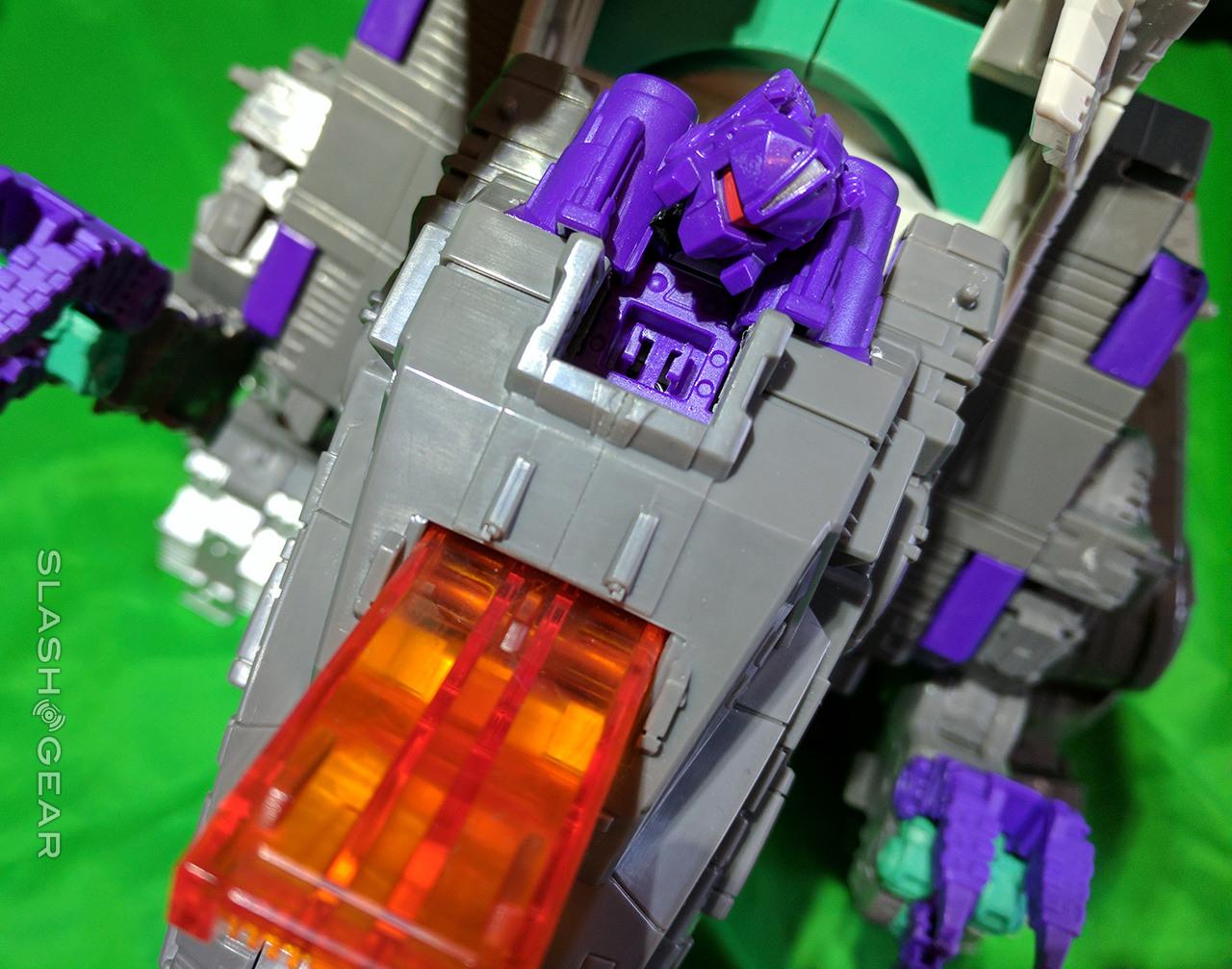 While we prefer to keep this destructor in t-rex mode, it’s also able to flip into City Mode as well as Battle Station Mode. This Battle Station Mode, as it was called in the original toy’s release, is branded here as more of a Spaceship. Do with it as you will! 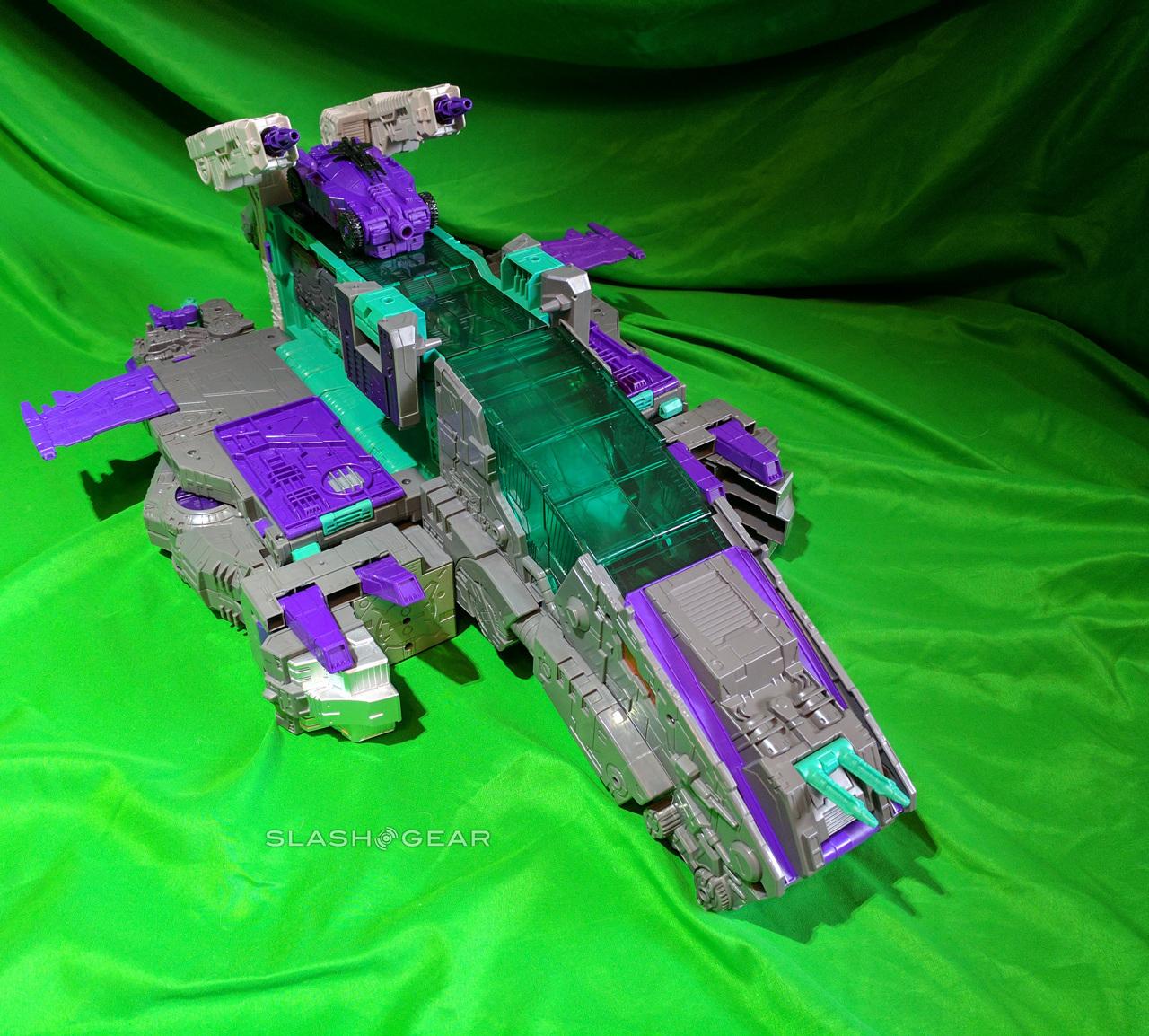 Above you’ll see how spaceship mode has a sort of front garage door for smaller autos. Drive it right on up and store. This mode includes a few handy lock-spots in the build that allow the spaceship to stay how it is while it’s flying across the living room. 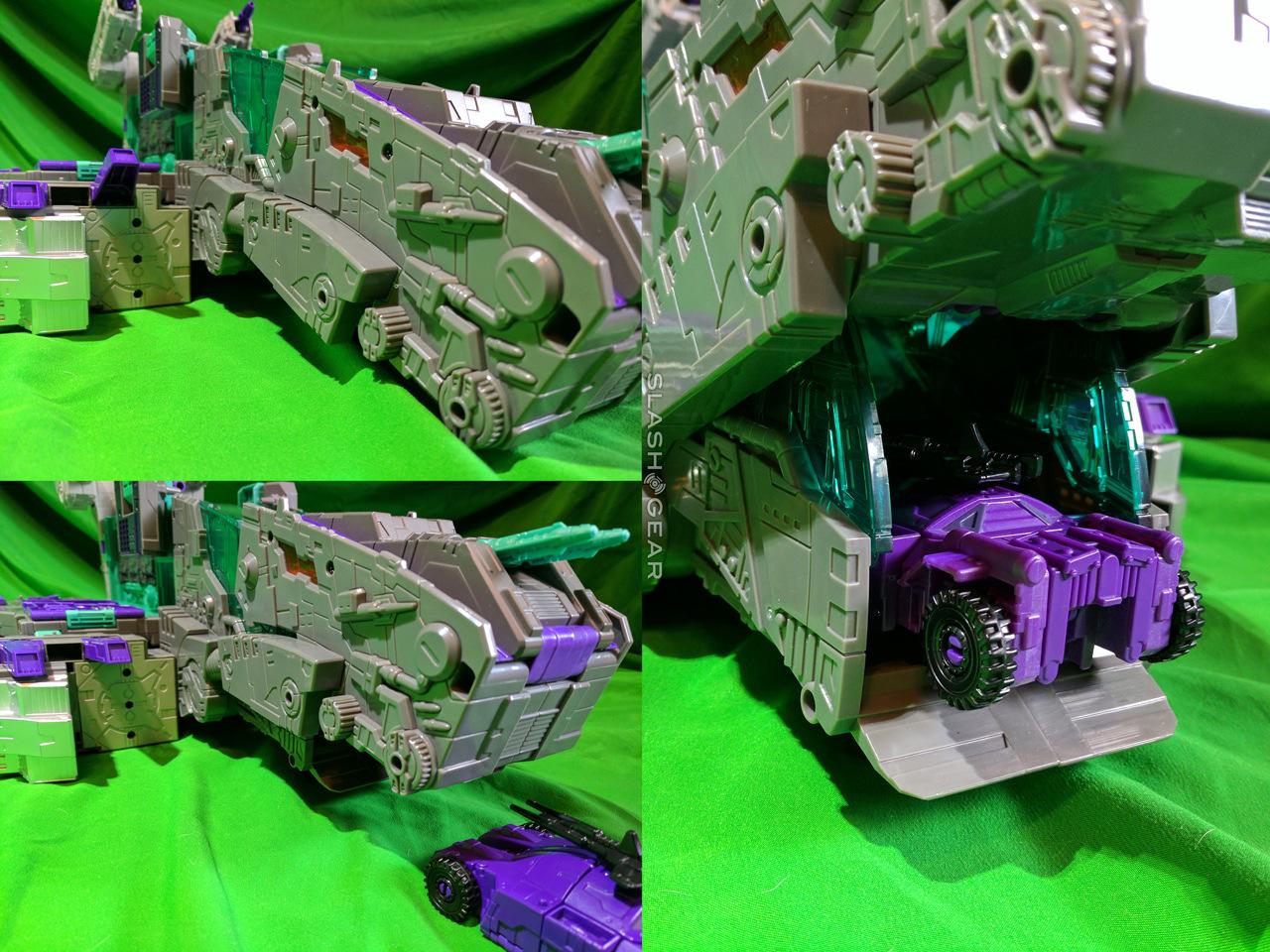 Above you’ll see the garage door opening up for Full Tilt. Truly Trypticon is the most accommodating of Transformer action figures, for he can hold others in his belly. 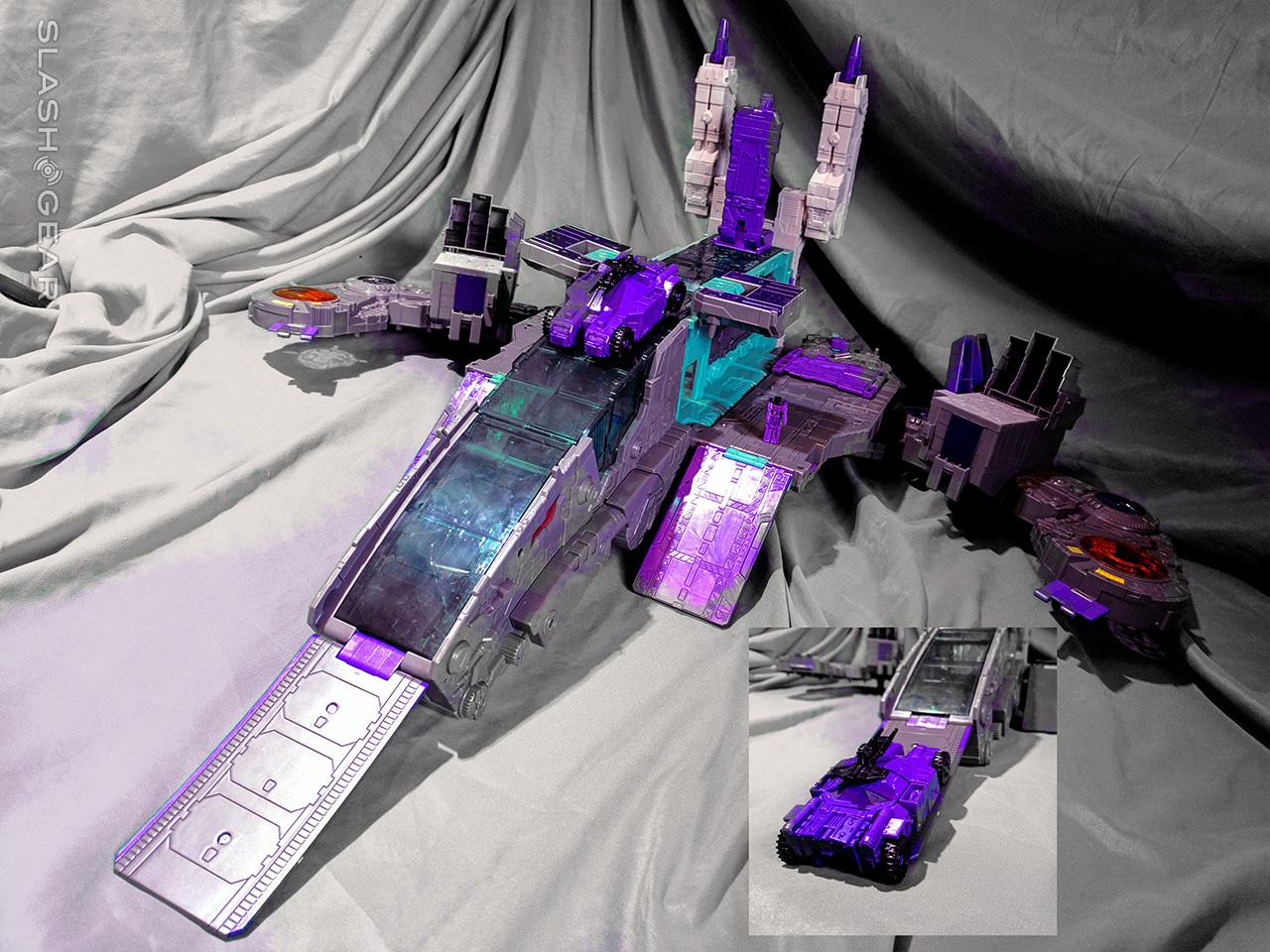 The City Mode on Trypticon allows him to spread out across the whole kitchen – with plenty of space to play with all the tiniest of bots. 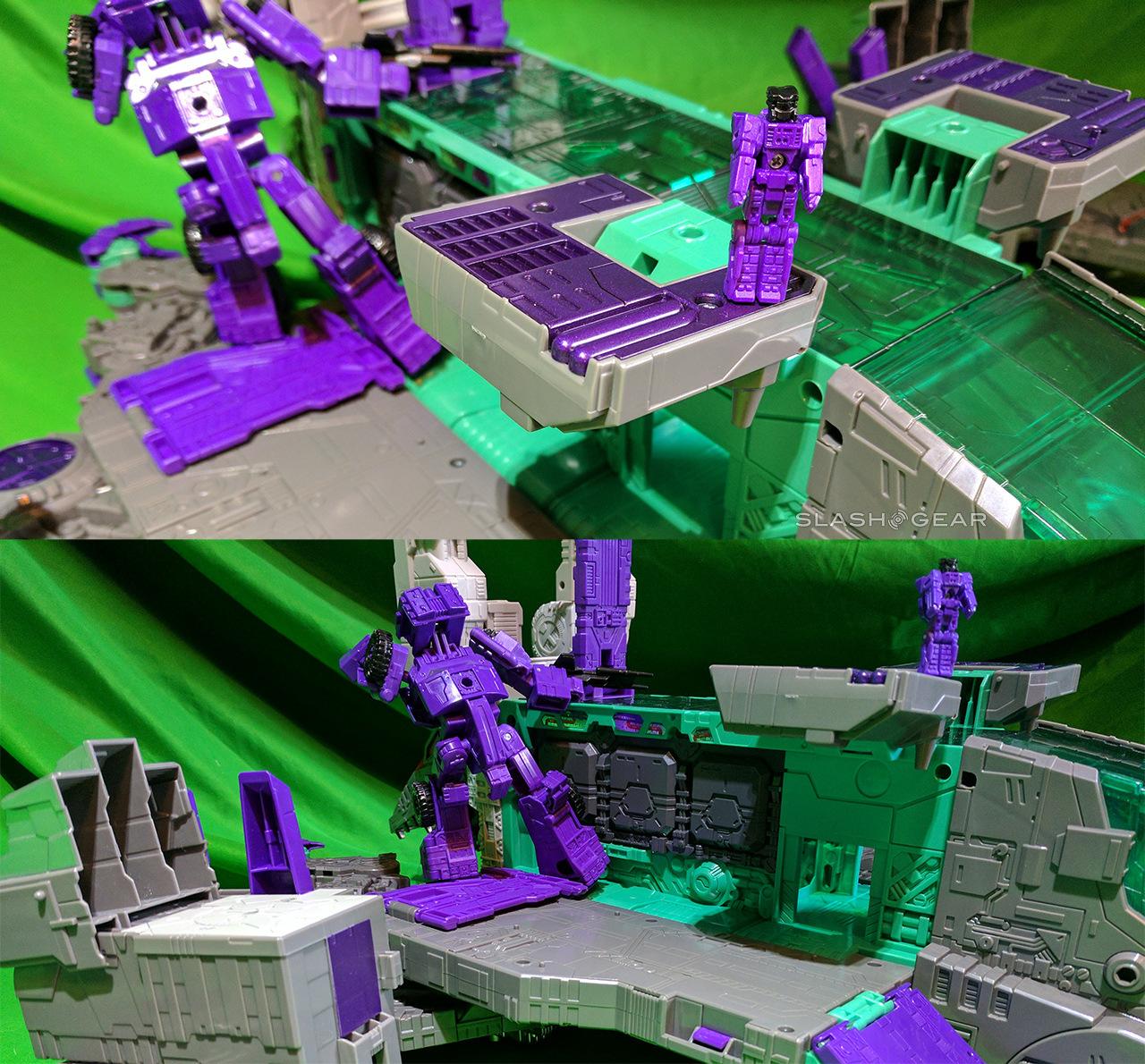 Above you’ll see Necro (Wipe-Out) and Full-Tilt playing a bit of hide and seek in the city. Take note, though, that if Necro is out, Full-Tilt has no head. Necro is the head. 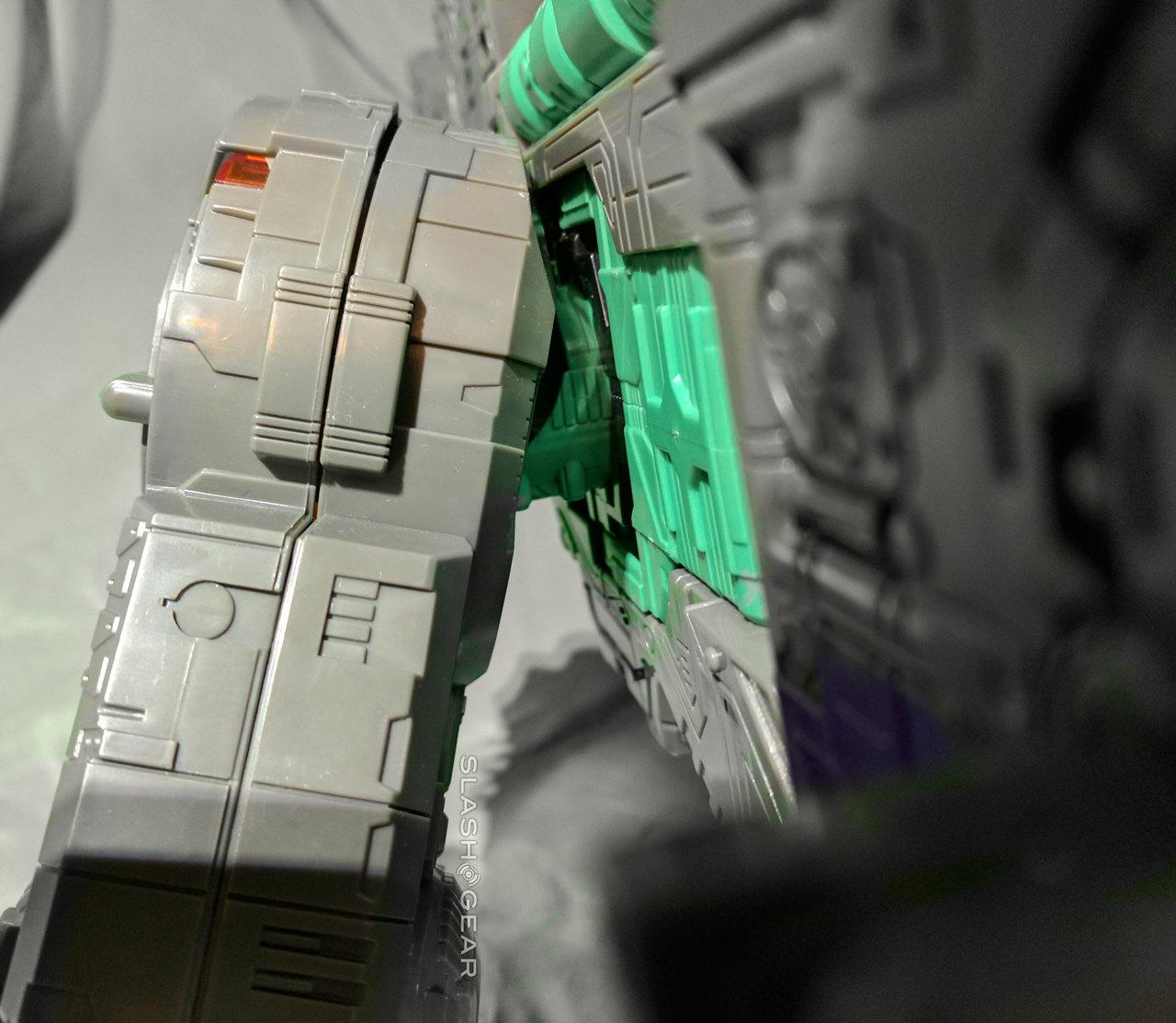 Above you’ll see the leg joint of Trypticon. Instead of the relatively immobile legs of yesteryear, this version of Trypticon has some most-excellent joints with which he can move about in a manner only beaten by the wildly and purposefully inaccurate representation of a t-rex in Jurassic Park. And his arms are much more usable. Look at these fabulous talons! 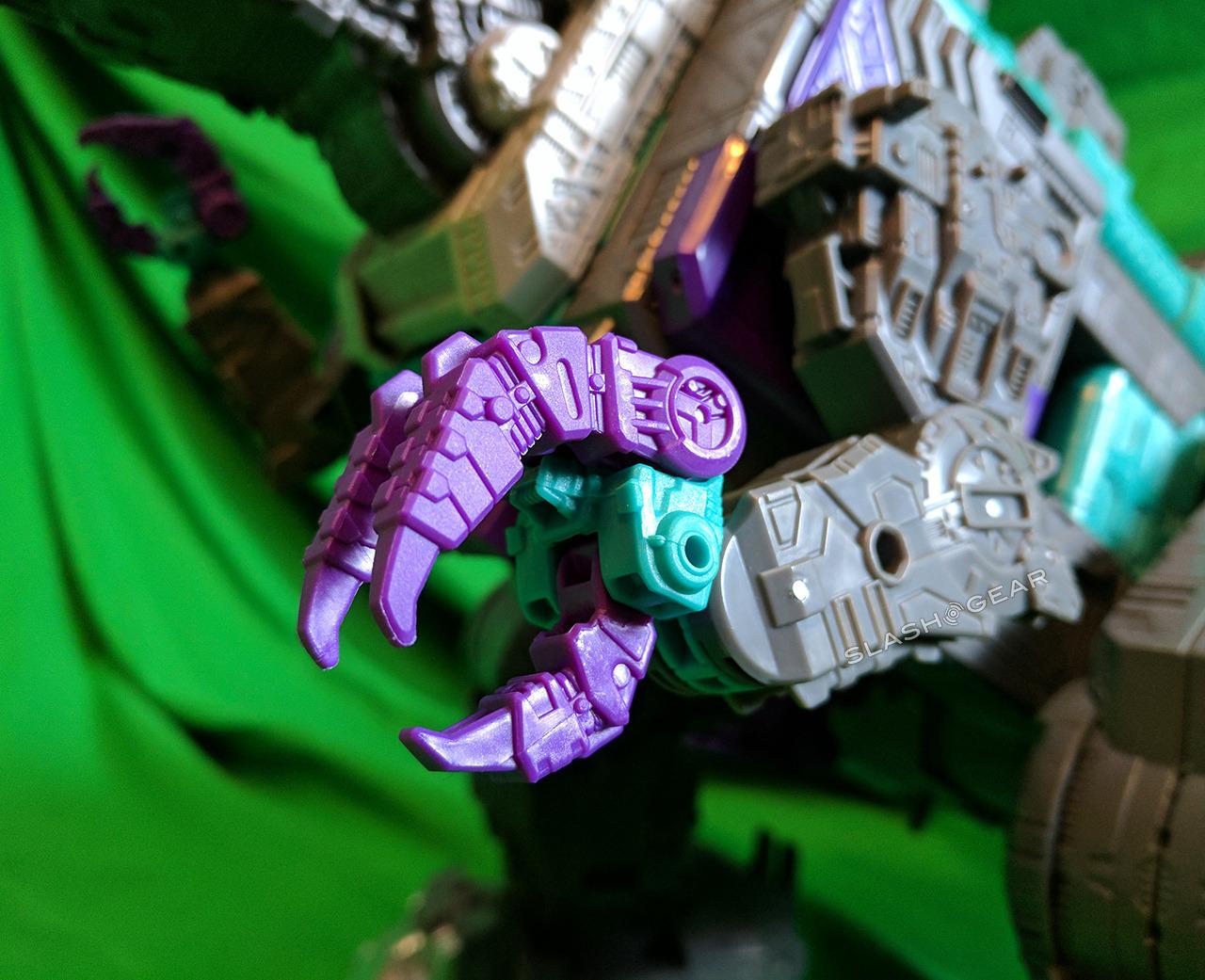 This hulking mass of an action figure is part of the latest “Titan Returns” line of Transformer toys. In addition to being the largest figure in this 2017 “Titans Return” toy line, Trypticon is officially the “biggest” Decepticon figure ever made. This toy is rated Ages 8 and up – don’t let your toddler son or daughter, brother or sister get at it – they’ll DEFINITELY eat the smaller parts like a dinosaur. 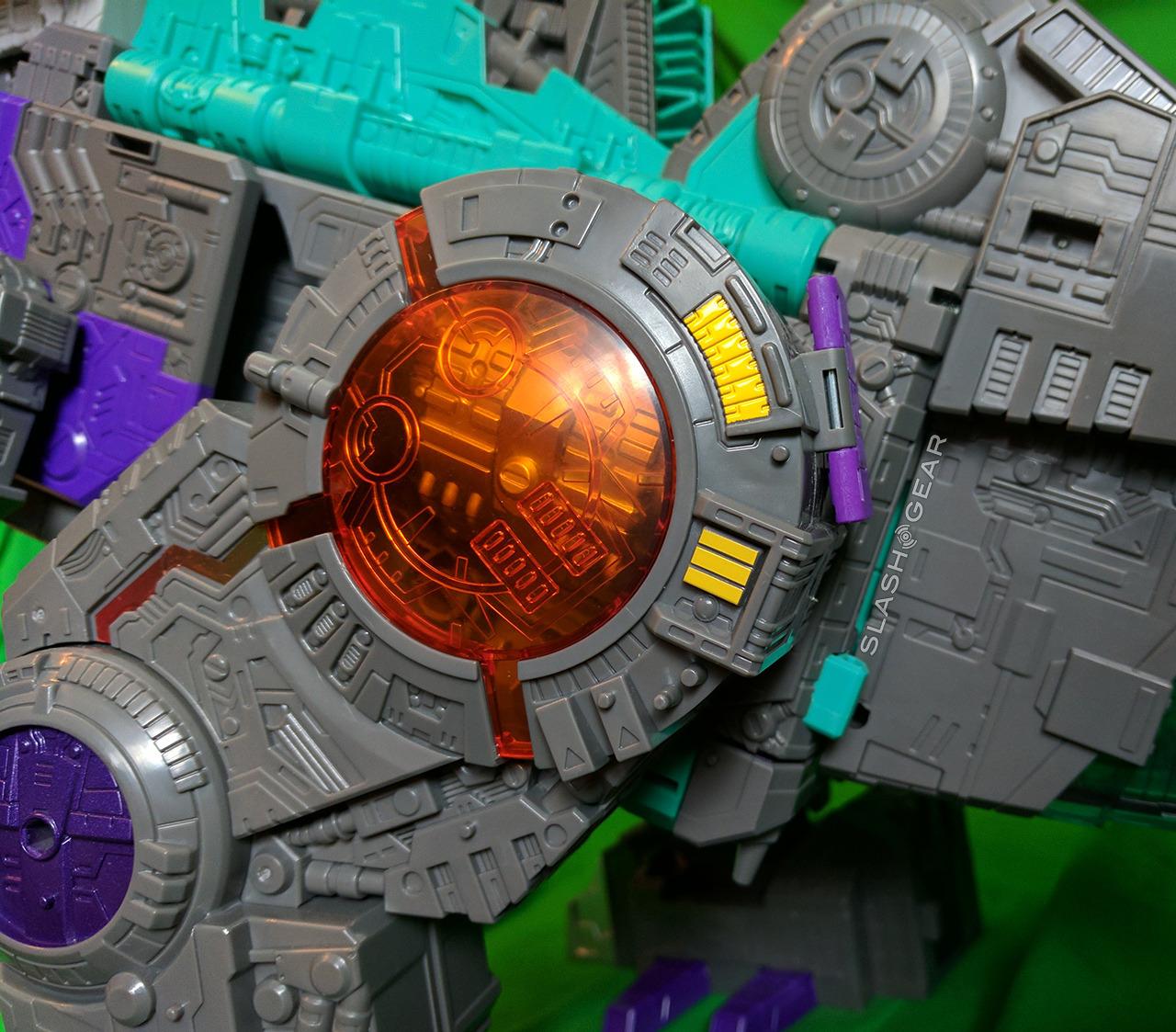 This action figure is scheduled to be released in the Fall of 2017 – though if you’re lucky you’ll find it out and about already. Trypticon is going to cost right around $150 at retail – good hunting to you.