There’s nothing quite like a war between television manufacturers to bring our the WOW factor at CES, and this year’s Westinghouse presentation includes quite the looker – a 110-inch 4K TV that’ll just swallow your room up whole. This machine is not yet ready for the market, but certainly will be soon – coming in at a cool $300,000 USD when you want to pick yours up with your life savings. Of course this machine isn’t exactly built for the everyday consumer, but getting up close and personal with it will br bringing on the heat to anyone’s eyeballs and brain.

This beast is ready to scale up standard HD signal to fill its monstrous full screen display, running native 4K content with the greatest of ease as well. This is but one of several televisions that’ve been revealed this week by Westinghouse that’ll have you raising your eyebrows, the others being 50, 55, and 65-inch versions of this machine starting at $2,500, moving up to the middle with $3k, and ending on the largest for $4,000 USD.

Each of these sets will be available and shipping in the first quarter of 2013 and will be in stores save the largest of the pack. The giant 110-inch model will be made to order, respecting the idea that if you’re going to pay that amount of cash for a television, the company is going to take care of you. Shake hands with Westinghouse with a 4K television this coming season – and play some Mario Brothers while you’re at it to see how giant the pixels are. 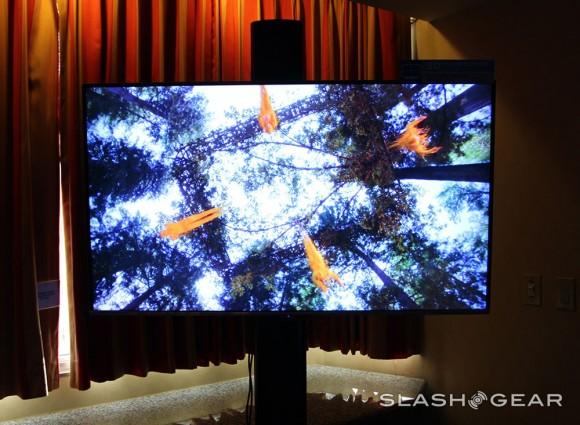 It should be made clear that when we got the opportunity to see this 2013 lineup this week, we saw images so bright and so sharp that we’ll have a difficult time ever looking at a lesser machine again. The room these beasts were in were engulfed in their undeniable wave of image power. Have a peek at the images we have of them above and below, but know that it’s not entirely possible to capture their excellence without your own eyes on the spot.