Wearable scooter doubles as a belt

Modern transportation needs are ever changing, and many are seeking greener alternatives for their daily commutes as environmental concerns grow. We’ve seen some odd solutions to these problems over the years, but none quite as unexpected as the “belt scooter”, a contraption that is exactly what its name suggests: a scooter that can be worn as a belt. The scooter is a concept design created by Adam Torok of Hungary, who posted images of his creation to Behance for all to enjoy.

Torok discusses the design in relation to transportation needs, pointing out the purposes and benefits of mass transportation and personal cars, including electric vehicles, noting that leg-powered vehicles are superior in certain situations. One big factor with the latter type of vehicle is how it is stored and taken from place to place. 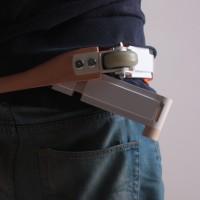 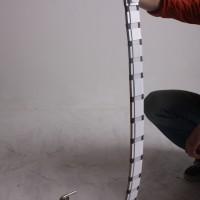 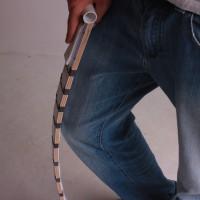 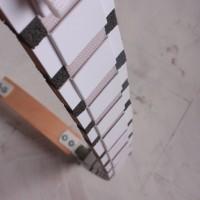 Wearables are the best way to go, in terms of keeping a vehicle portable, allowing one to take it anywhere they might need it. Hence, the belt. The scooter concept was apparently made as part of a degree project, and was demonstrated at this year’s Budapest Design Week. A new prototype is also said to be in development.

The belt is made from iron, plywood, and what appears to be nylon straps; it weighs about 3.75lbs, making it light enough to tote around, though definitely something you’d feel around the hips. Of course, this isn’t the only odd wearable we’ve seen — perhaps the closest comparison is the wearable chair, which lets the user sit wherever they’d like.