We give Panasonic’s ELUGA a bath

Panasonic isn’t taking any chances with its smartphone expansion plans; its ELUGA phone line-up promises speed, style and useful ruggedness, so we grabbed an ELUGA and gave it an impromptu bath. Waterproof, along with dustproof, the ELUGA can survive in up to a meter of water for a 30 minute period; we didn’t leave it that long, however, as the 4.3-inch qHD OLED display was asking to be played with.

Performance from the 1GHz dualcore processor – albeit running a non-final customized build of Android 2.3.5 Gingerbread with Panasonic’s own UI modifications – was smooth, and the OLED screen holds up well to panels from Samsung and others. It’s the hand-feel that really impresses, however: the 7.8mm depth feels even less in the hand thanks to the D-shaped profile.

It’s also sturdy, with its metal construction, and though the shifted power/lock buttons and volume keys – which have been moved slightly around, to face out the back of the phone – take a little getting used to, we’ll put up with that for the reduced thickness. Panasonic has also managed to squeeze in NFC, HSPA+ and WiFi b/g/n, along with 8GB of user storage.

Unfortunately there’s no underwater internet browsing to be had, as the ELUGA automatically kicks into power saving mode when it’s submersed. That safety measure shuts off automatically when you retrieve it from the water, however, something which only took a second or so.

Does it stand a chance against the iPhone and other Androids in the market? Panasonic may lack brand recognition but don’t doubt the appeal of a slimline phone on store shelves. The ELUGA will drop in Europe come Q2, pricing to be confirmed. 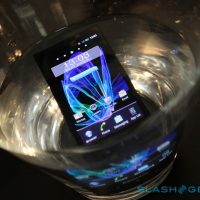 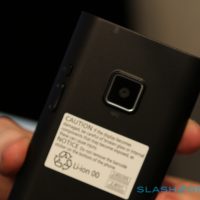 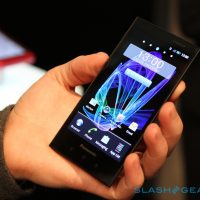 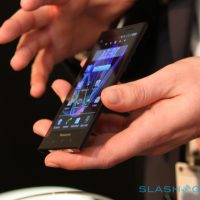 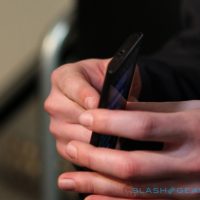