When you love your car but can’t draw a comic evangelizing its charms, it turns out the best way to contact Tesla CEO Elon Musk is to take out a full-page advert. A pair of Tesla Model S owners – with a car each – coughed up for a page in the Palo Alto Weekly, praising the EV but also suggesting some changes, which Musk has now confirmed are being considered.

Most of the changes are minimal, and indeed the sort of things that would probably only be noticed after a longer period of ownership. The unnamed drivers suggest that the blind-spot and cross-traffic monitoring system should do better at spotting lower objects, for instance, while they’d like to see improvements to voice dialing and bigger on-screen buttons for handling calls on the sizable touchscreen in the center console.

Other requested changes are more ergonomic, like adjusting the location of the cup holder and resizing the sun visor so it’s more useful for shorter drivers. They’d also like to see the charger door motorized so that it shuts automatically when the Supercharger cable is detached. 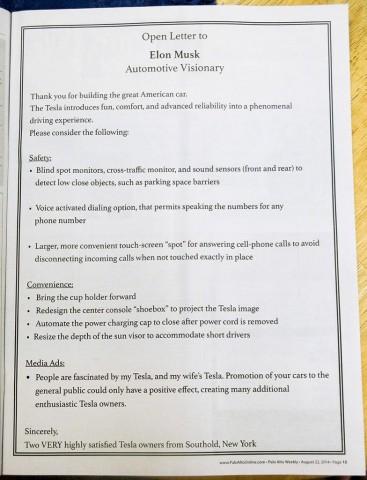 According to Musk, the feedback is on the right lines. “Many of the suggestions will be implemented soon,” he tweeted, along with a photo of the advert, though the CEO didn’t confirm which of the changes were on Tesla’s shortlist.

Tesla’s attitude to public feedback has arguably been more responsive than that of the established car brands. After longer-term reviews criticized some of the Model S’ reliability earlier this month, the firm opted to extend its warranty coverage so that those driving extended distances would still be included.