Your next Walmart order might descend from the skies, with the retailer announcing a new on-demand drone delivery pilot. The scheme will focus on small deliveries, with select grocery and household essentials slung underneath specially-designed drones and flown over to customers.

It’s launching from today, though you’ll need to be in Fayetteville, North Carolina in order to actually try it out. Walmart has piloted with Flytrex, a company which is already running drone delivery schemes such as for COVID-19 tests.

The drones themselves are larger than the typical DJI, Skydio, or Parrot consumer model. They can fly at up to 32 mph using six rotors, the delivery box containing the Walmart order mounted underneath. When they reach their destination, they’re not designed to land; instead, the contents of the box are lowered on a wire, with the drone hovering eighty feet in the air.

It means that there are no concerns with landing or launching the drone from a garden or driveway, and avoids customers coming anywhere near the aircraft’s spinning propeller blades. Flytrex says that it can operate in winds of up to 18 mph, and carry up to 6.6 pounds of cargo for distances of 3.5 miles from the launch location. Normally, they fly at 230 feet, but they require dry days with no rain. 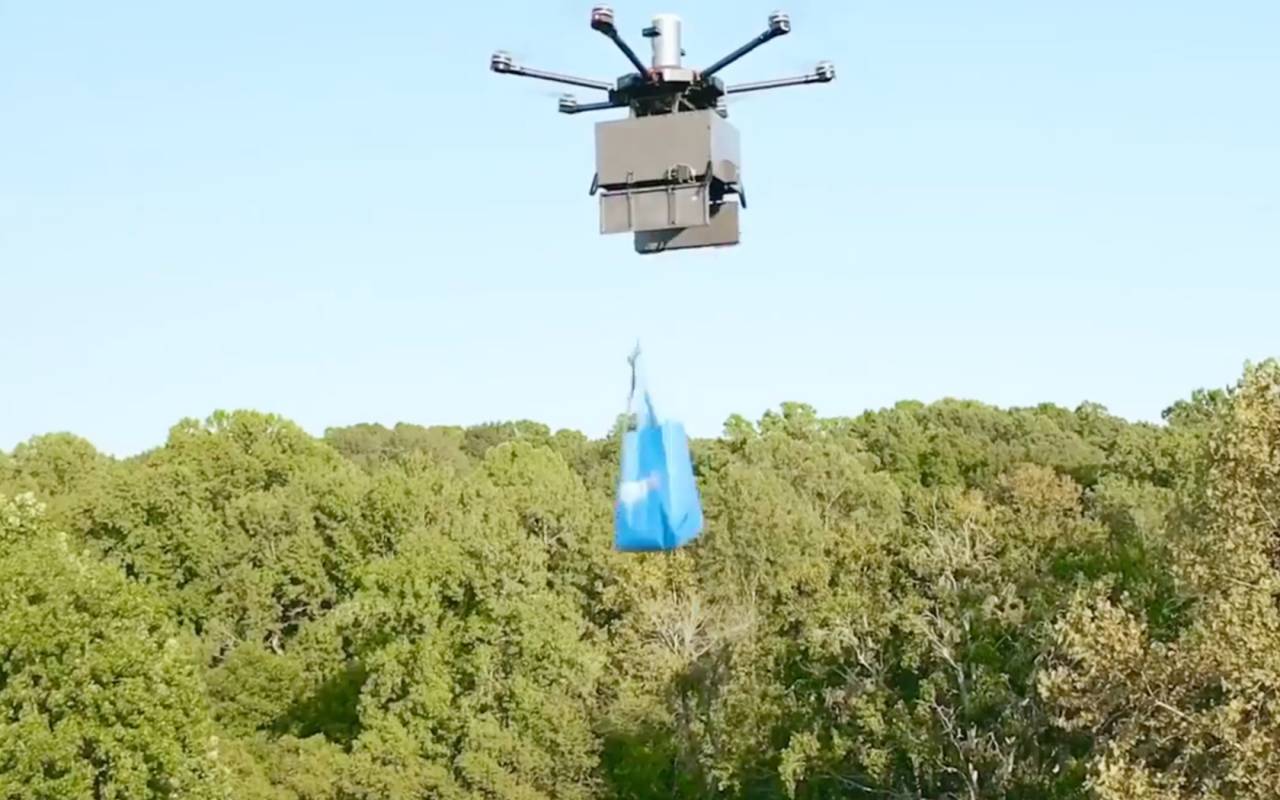 As for piloting, that’s done autonomously. Flytex uses maps that prioritize routes which avoid flying over people, and there are redundant motors, navigation, and even an automatic parachute system should the very worst happen. There are no cameras onboard either, for privacy concerns: instead the drones navigate through GPS and other sensors.

It’s a long way from being a ubiquitous service, of course. “We know that it will be some time before we see millions of packages delivered via drone,” Tom Ward, Senior Vice President of Customer Product at Walmart, concedes. “That still feels like a bit of science fiction, but we’re at a point where we’re learning more and more about the technology that is available and how we can use it to make our customers’ lives easier.”

The retailer hasn’t been afraid of looking to new technology. Back in June, it experimented with a cashier less grocery story, using self-checkout technology that avoided the traditional scanner and conveyor belt. Walmart has also been looking at how autonomous cars could be used for short-range deliveries, bypassing human operators.

Still, it’s likely that this drone delivery pilot will only amplify comparisons between Walmart and its key rival, Amazon. Amazon Prime Air has also been experimenting with using drones to deliver packages, with its own in-house design of aircraft. Neither service has broad availability at this point, however, with a variety of cost, safety, and regulatory hurdles still to be navigated.