Out of all the events I had the pleasure of attending at Monterey Car Week and Pebble Beach – a week filled with priceless classics, stunning hypercars, and the sort of rarities that give automotive enthusiasts palpitations – I wasn’t expecting a bright green electric prototype to be the most memorable. I got a chance to take the VW ID Buggy for a spin, and it’s fair to say it left a lasting impression.

There was no shortage of competition for that, mind. It was a week of unforgettable test drives, in fact. I got behind the wheel of the Karma Revero GT prototype and then rode shotgun around Laguna Seca in an Audi R8 LMS GT2 with nine-time Le Mans winner Tom Kristensen. I tell you that to make it abundantly clear that the week was absolutely not short of speed or star quality.

We got our first glimpse of the VW ID Buggy at the Geneva Motor Show earlier this year. At the heart of the VW ID Buggy is Volkswagen’s ambitious MEB electric platform, but its soul is that of a modernized Meyers Manx dune buggy. Longer and wider than the original car, true, but the same pared-back, pure focused ethos.

The day did its best to dampen my enthusiasm. Monterey in August is typically all sunshine to go with car week’s shrimp, but when I arrived at the VW drive – staged in a parking lot along the beach – the weather had turned for the worse. Clouds rolled in with high winds, but I wasn’t about to let miserable weather ruin my fun.

There was a ray of sunshine to help me there, too. Sitting inside a VW Atlas, admiring his creation – a red Manx dune buggy – was Mr. Bruce Meyers, 93-years young and in high spirits. We had a few pleasant exchanges, reminiscing back on the good old days of the Meyers Manx. “I can’t believe they sought me out to remake this thing,” he told me, humbly.

I’m glad they did. VW didn’t replicate the Manx, but instead took the core concept of the buggy and transformed it into a minimalist canvas for anyone who might care to build it out. The Manx has a VW Beetle engine mounted in the rear, while the ID Buggy has the same layout with a rear-mounted electric motor. 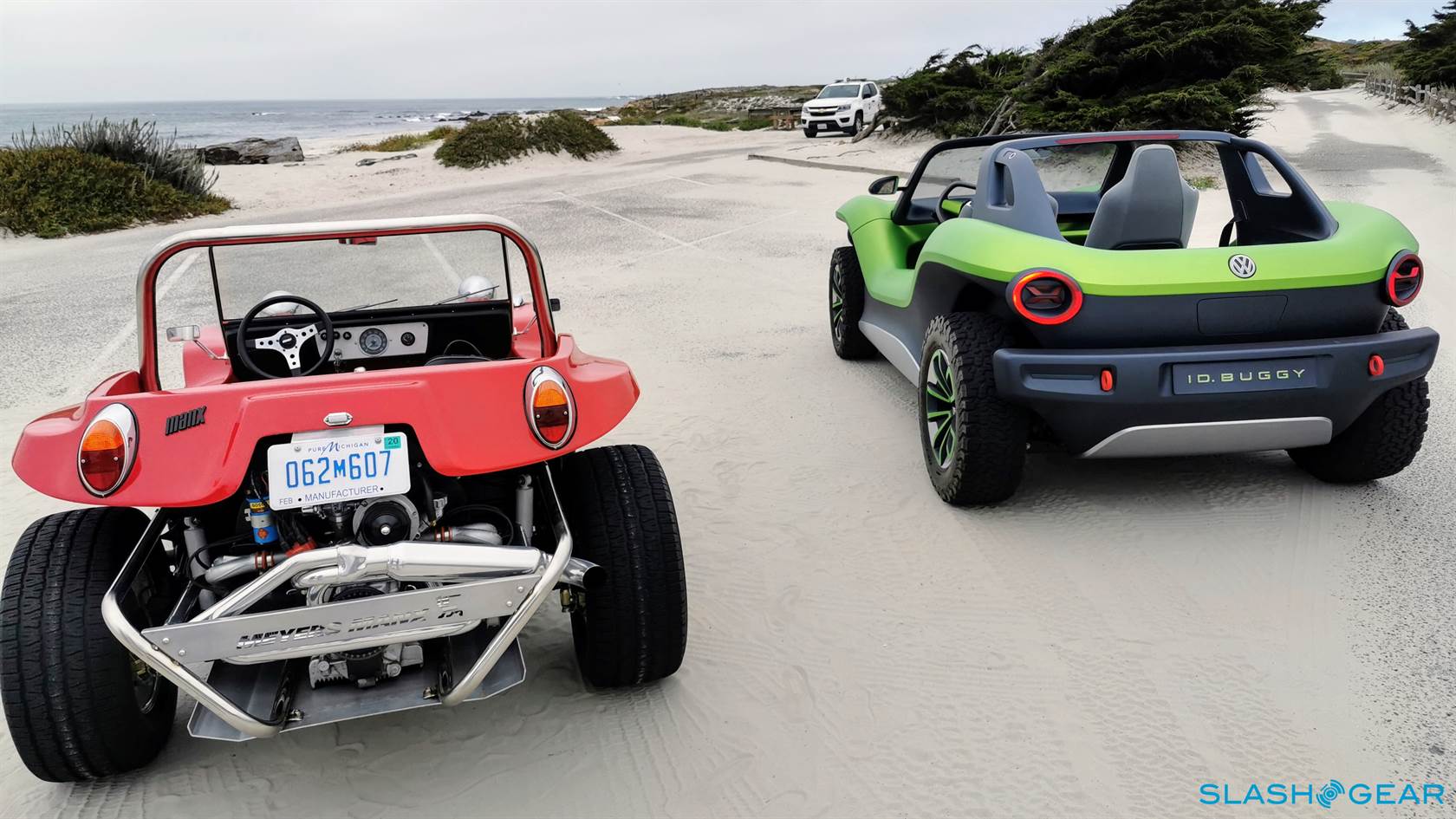 “It’s a concept car that’s based on VW’s MEB electrical platform,” Mark Gillie, Sr. Manager, Product & Technology Communications at VW of America explained, as we climbed across the ID Buggy’s high sills and into the spartan interior. Neither exactly a concept nor a proper prototype, Volkswagen is still unclear if this car is intended for production. “Our reason for doing the Buggy was to show that you can do some weird stuff,” Mark joked. “The MEB platform is not just about rational cars.”

If the retro styling cues are any indication, this is going to be a fun test drive, even if my test vehicle is limited to under 30 mph. The ID Buggy packs a 64-kWh battery pack under the floor, good for 155 miles of range based on European WLTP testing. The official US EPA numbers will be lower than that, but this car is not about long road trips in the same manner that Oxfords are not suitable for running. 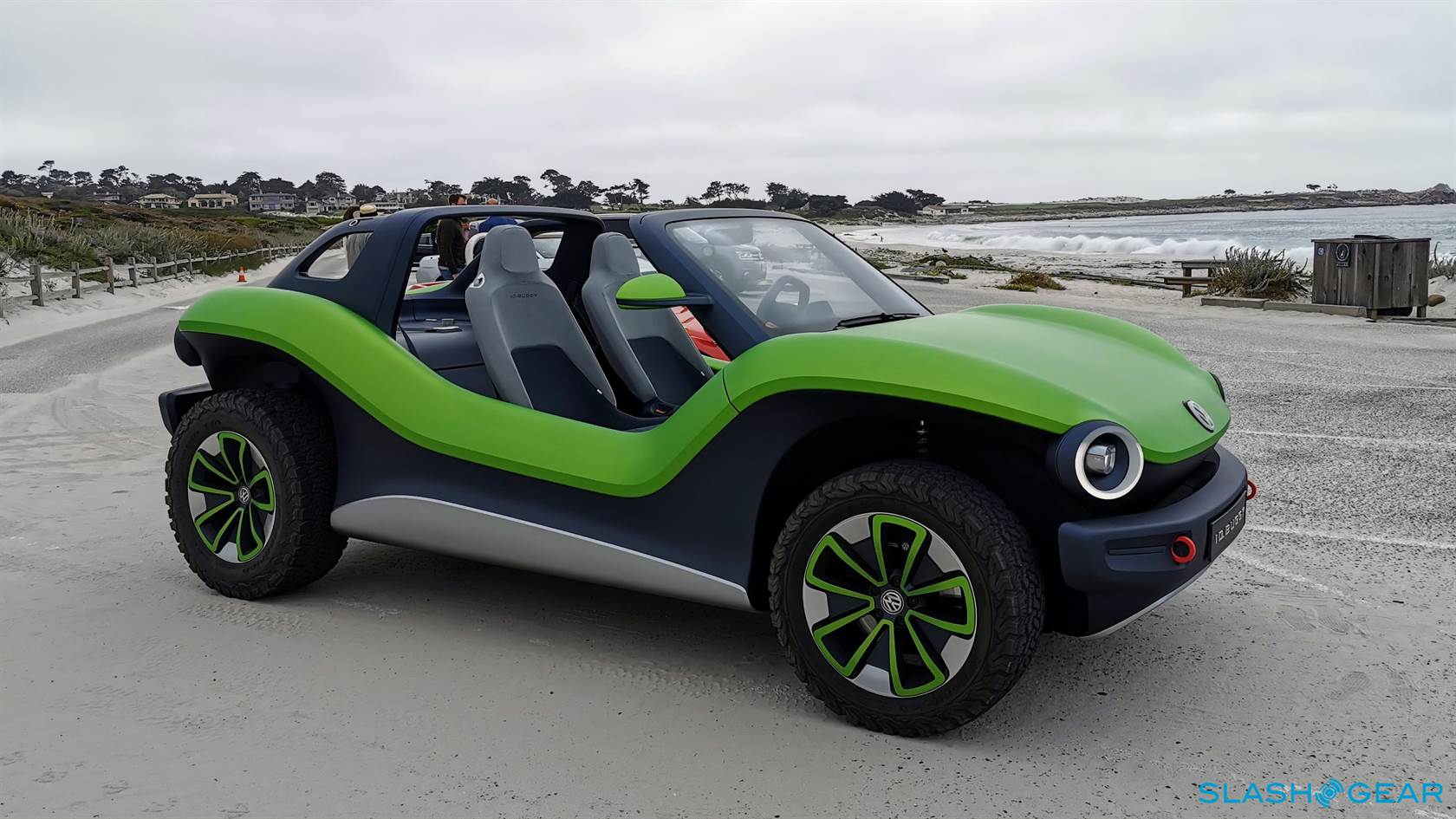 With a single electric motor powering the rear wheels, the ID Buggy makes good use of the available 201 horsepower and 228 pound-feet of torque. It accelerates briskly and instantly with a prod of the pedal, and this is with RWD. I can only imagine what a proper all-wheel drivetrain could do to the same sort of car.

“The MEB architecture is flexible enough that we can do an all-wheel-drive version with 302 horsepower and 60:40 split between front and rear,” Gillies pointed out. “As a company, we are looking if we can get outside companies interested in using the MEB architecture to drive the volumes up. And obviously, the thing with electric is the more volume you get, and the cost will come down for the batteries because the most expensive thing in an electric car is the batteries.”

With that, you can think of the VW ID Buggy as a case study or an experiment, if you will. Volkswagen is putting on a fresh face by introducing a new corporate logo at the Frankfurt Motor Show in September, and I can think of no better way to express this change than by showing what the German carmaker is capable of with its modular MEB platform. 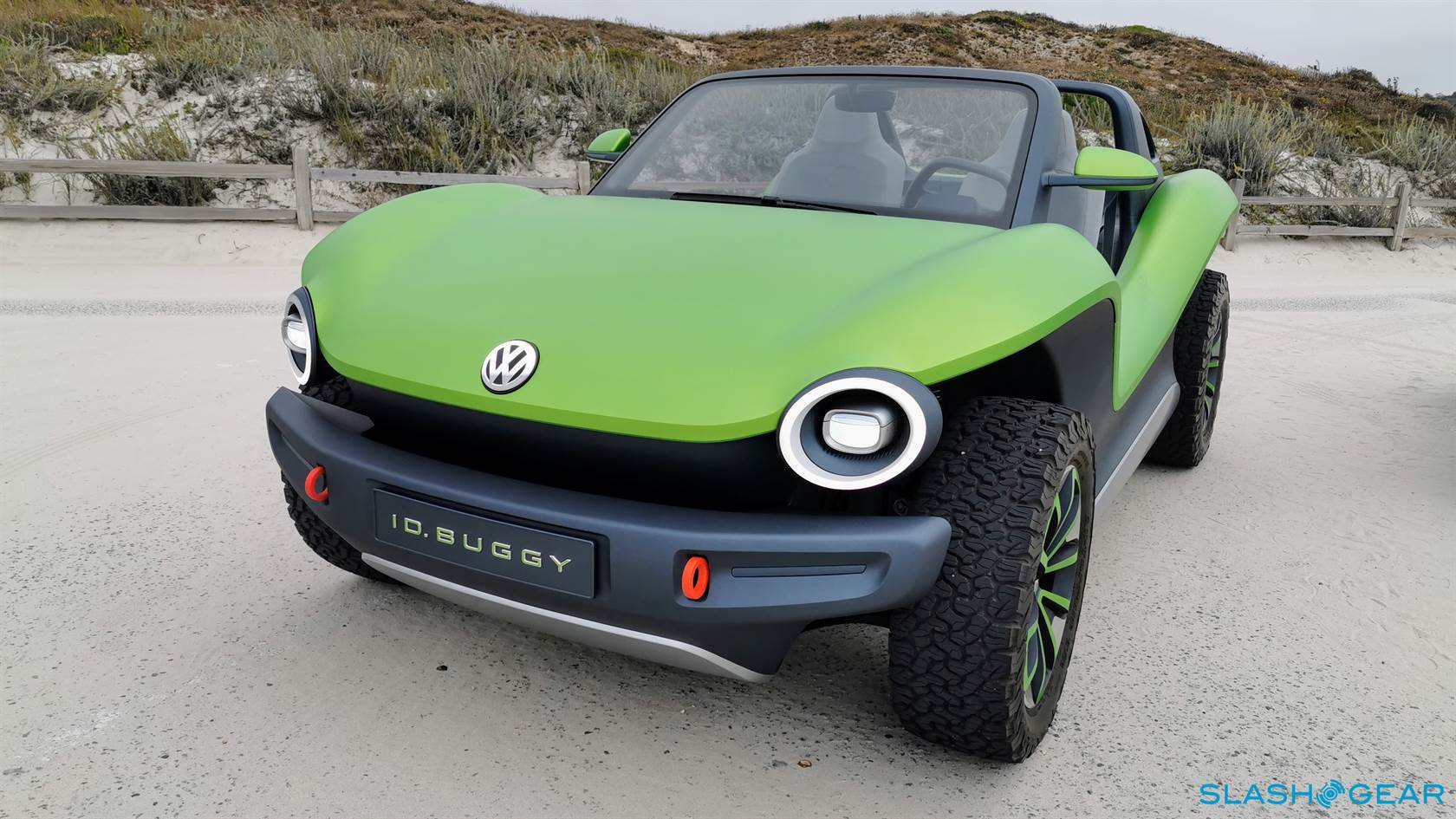 Make no mistake about it, the VW ID Buggy looks, drives, and feels very much like a concept at this stage. The steering feel is a little lifeless, and the ride a bit choppy. However, all those issues are turned to naught as the wind comes rushing in your face at 25 mph. It’s fun, visceral, exciting, and high-tech all at the same time.

Living in Phoenix, except for the scorching summer heat, the weather is pretty much amazing throughout the year. I can see myself having a blast in a production version of the ID Buggy – especially if the price is kept reasonably low. And, being a parent of two girls at the age of six and nine, I can’t think of a more fun vehicle to chauffeur them to school, dance classes, gymnastics, or even a movie at the drive-in (if only those were still around).

In short, all the highlights of an EV are there: punchy acceleration, quiet drivetrain, and a modern feel. But, unlike other EVs, I’m driving the ID Buggy with no roof, no proper doors, and no rear seats. All that adds up to a unique experience, one unlike I’ve ever felt before. And with the eye-popping electric green paint job, the VW ID Buggy garnered enough approval and ‘likes’ on social media.

In truth, my co-pilot and I were grinning ear to ear inside the ID Buggy. The most amazing thing is the smiles of people waving at us as we passed by, their smiles as wide as the concept’s frog-like face. Prompting that sort of reaction is a hard thing to do in the face of hyper-exclusive exotica like the Bugatti La Voiture Noire and Lamborghini Aventador SVJ63 Roadster lining up the fairways.

“I’ve been here for the last day and a half, so it’s not exactly shabby being by the ocean in Pebble Beach,” commented Mark of VW, as I pulled over near the end of my test drive. “But playing around with the ID Buggy and our Meyers Manx is pretty good fun.”

To that, I have to agree wholeheartedly.

After returning the ID Buggy back safely, I wasted no time climbing into the Manx. Surrounded by vintage cars worth more money than my house, I felt like I was having much more fun driving this thing. The four-speed manual gearbox was an absolute joy, though at first, I was somewhat fearful of possibly breaking the darn thing – or, worse yet, stalling in front of the watchful eyes of the sizable crowds lined up along the side of the road.

“Keep revving it, rev it up,” Mark exclaimed, and that’s exactly what I did. If I’m being completely honest, it was a hundred times more fun driving the Manx than the ID Buggy, not least because there was no pesky speed limiter kicking in to spoil things just as they started getting good.

All the same, it’s clear that the ID Buggy represents something big and important for Volkswagen. While its production fate may not yet be decided, the automaker has given the green-light to something almost as unexpected, in the shape of the ID BUZZ electric Microbus. That stands out as a four-wheeled flight of fancy in a sea of earnest EVs and gives me hope that as serious as VW may be about its electric future, it’s also willing to “keep revving it” when it comes to cars that stir the soul.