Smart glasses need to blend in like regular eyewear if they’re ever going to break into the mainstream, and Vuzix thinks its next-gen digital spectacles could have that edge. Previewed for the first time today – and coming sooner than you might think, Vuzix is promising – the new smart glasses could easily be mistaken for regular prescription glasses at first and even second glance, with none of the obvious giveaways that there’s tech onboard.

So, there are no chunky projector assemblies, as North’s first-generation Focals tried their best to disguise. No huge batteries, either, or oversized frames in an attempt to offset the bulk of the technology the smart glasses need to accommodate. Unlike audio-only frames, however, Vuzix is still packing transparent displays.

The basis is a new type of ultra-slim, binocular waveguide, one for each lens. They’re used with new micro-LED projectors – again, one for each eye – with 1 micron pixels. Vuzix says it’s developing both monochrome and color versions, with a larger field of view and support for 3D. Notably, they don’t prevent the arms of the glasses from folding as normal, which was a common complaint about Focals. 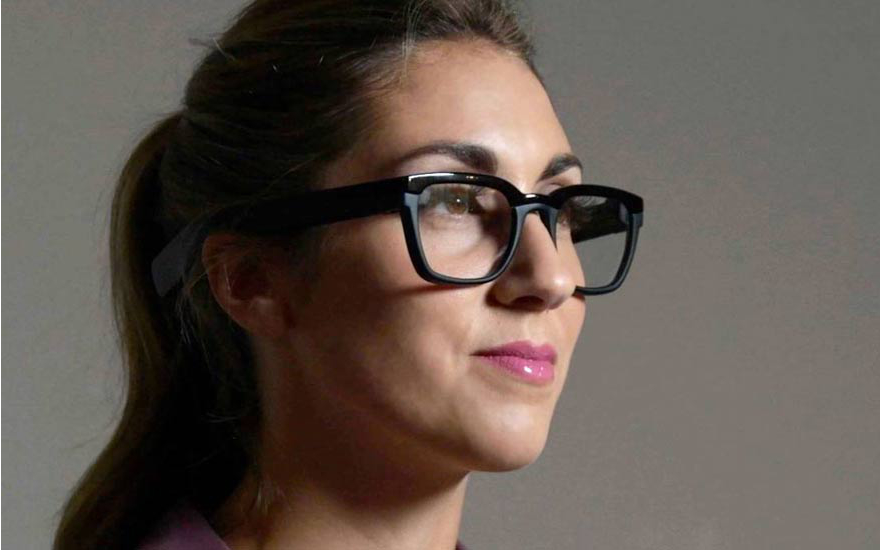 They’re also low-powered enough that Vuzix doesn’t need outsized batteries, the company claims. Instead there are dual batteries embedded into the temples of the glasses, which Vuzix estimates could run the glasses for hours.

For sound, there are multiple microphones used for ambient noise-cancelation, along with acoustic chambers integrated into the rear of the frames. That, Vuzix says, means you’ll be able to hear audio from the smart glasses – whether that’s a phone call or some sort of UI feedback – without sacrificing awareness of ambient sound. Those around you, however, shouldn’t be able to hear what your glasses are whispering to you.

Unlike smart glasses which are permanently tethered to a phone for processing and connectivity, Vuzix even claims to have embedded all that in the frames as well. While there’s phone connectivity via WiFi and Bluetooth, there’s also a built-in LTE option, and Android running on the glasses themselves. Control is via either voice or tapping on the touch-sensitive arm, and they should run third-party apps as you’d expect from any Android device.

Just how much of this Vuzix currently has working as described remains to be seen. The company – which already has a variety of smart glasses and wearables on the market, albeit none with the same blend-in styling as these next-generation frames – says it expects the technology to be available in 2021. There’ll be “a reasonably priced” consumer version, all the way through to more complex enterprise versions with integrated cellular. It’s an ambitious roadmap, though it does fall in line with what we’re expecting from much bigger companies like Apple and Google, also known to be working on smart glasses of their own.