Volvo is aiming no fatal accidents for those in one of the safety-obsessed Swedish firm’s cars by 2020, cooking up a complex 360-degree sensor and vision system that could also open the door to autonomous vehicles. The culmination of Volvo’s four year Non-Hit Car and Truck project, the technology combines data from a wide range of sensors – including cameras, GPS, and others – into a single perspective of the car’s environment, rather than treating each system as discrete as per most current vehicles, and even teaching vehicles how to plan an escape route.

Today’s cars are more technologically advanced than ever before. Systems like smart cruise control that can maintain a safe distance from the traffic ahead even as it changes speed, and assisted parking that can reverse a car into an empty space automatically, have filtered down from expensive luxury models into mainstream vehicles, albeit usually as an option.

However, they generally operate independently of each other, something Volvo has argued is a waste of resources. Its approach is to feed all of the sensor data, from cameras, radar, lidar, GPS, and other systems, into a single, centralized Sensor Fusion framework. 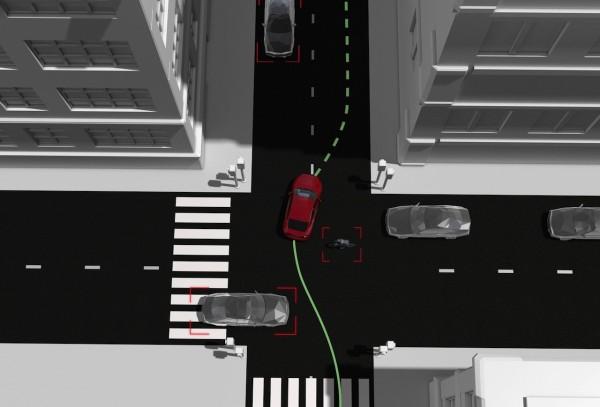 With that amalgamated information, the car would be able to track and predict any threats around itself that the driver might ordinarily miss. Volvo goes one step further, however, with the system also constantly analyzing collision-free escape routes and then helping the driver navigate through them by taking control of the steering and/or braking.

That’ll come in handy when self-driving cars become more commonplace, Volvo suggests, which will need to react swiftly to potential hazards. It’s an issue that’s been raised around Google’s autonomous car project, which are currently unable to spot things like police waving from the side of the road to slow traffic, or even spot some traffic signs that they haven’t been pre-programmed to identify.

A Volvo that can drive itself isn’t on the cards immediately, though the firm did expand its trials earlier this year. “Our primary objective is to focus on preventing different types of accident scenarios,” Anders Almevad, Project Manager for the Non-Hit Car Project, said today. “But going forward, we will also continue to work on developing cars that adapt to each individual driver’s unique behavior.”