Concept cars are typically a designer’s flight of fancy, but that doesn’t mean the Volvo 360c doesn’t have some very good ideas for real-life. The autonomous EV, with its highly flexible cabin and communicative light strips, is a rich vein of clever details, some more production-ready than others.

The 360c isn’t intended to spawn a production car, at least not directly. Volvo sees it as a conversation starter: a way to spur discussions about how autonomous vehicles will operate among human road-users, whether they be other drivers, pedestrians, cyclists, or something else. All the same, there are some 360c features and ideas we’d love to see make it to the road. 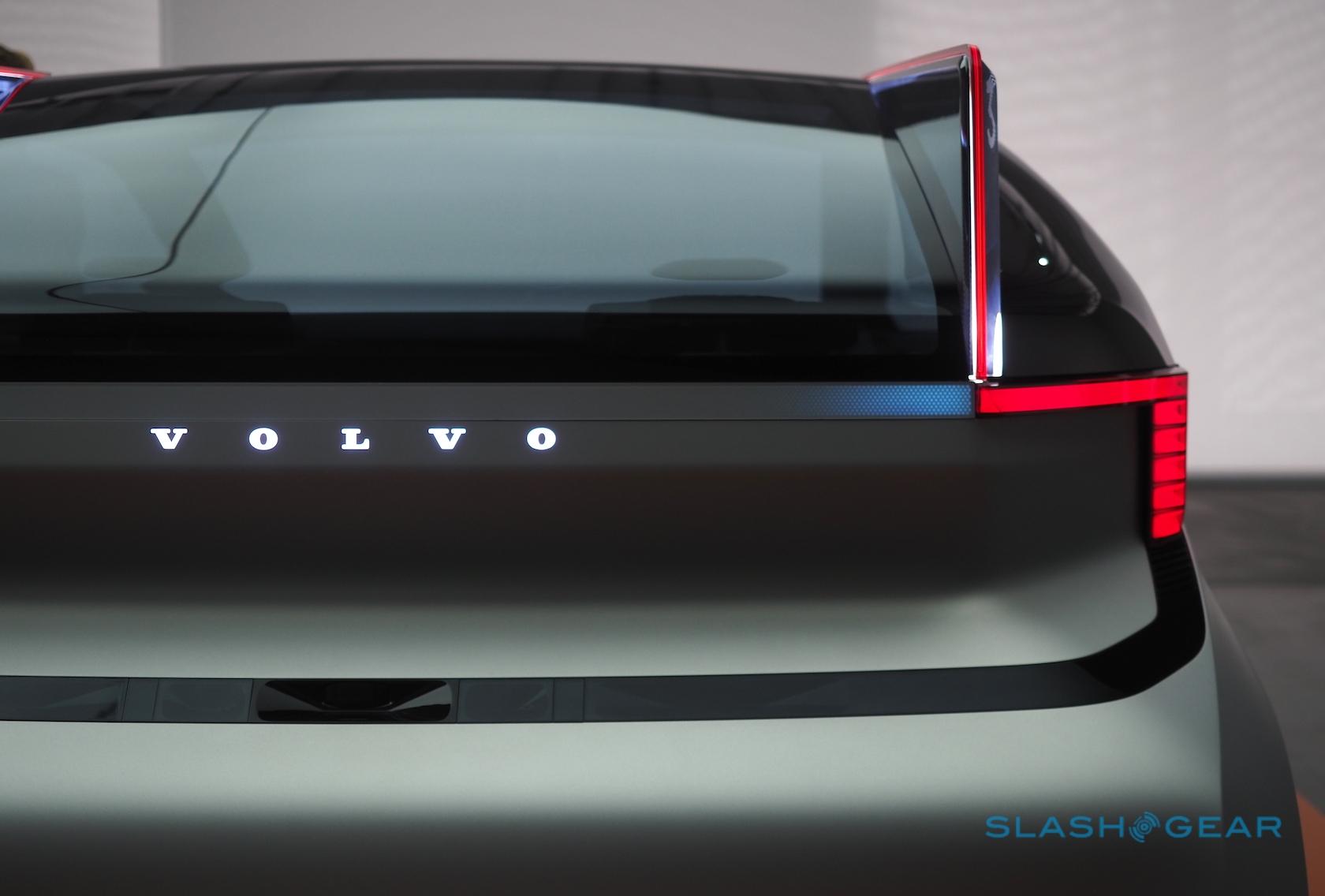 At first glance, it’s easy to assume the 360c is a huge vehicle, fit to star in a science-fiction movie. In reality, it’s actually a little shorter than Volvo’s XC90 SUV, along with being slightly wider and lower. While that combination of dimensions help give the concept a larger-than-life look, it’s also about how Volvo has taken advantage of next-generation drivetrains.

Since there’s no bulky gas engine to accommodate, the engineers can push the wheels to the very corners of the car. It means that, in proportion to the 360c’s overall length, the wheelbase is huge. That translates into more interior space. 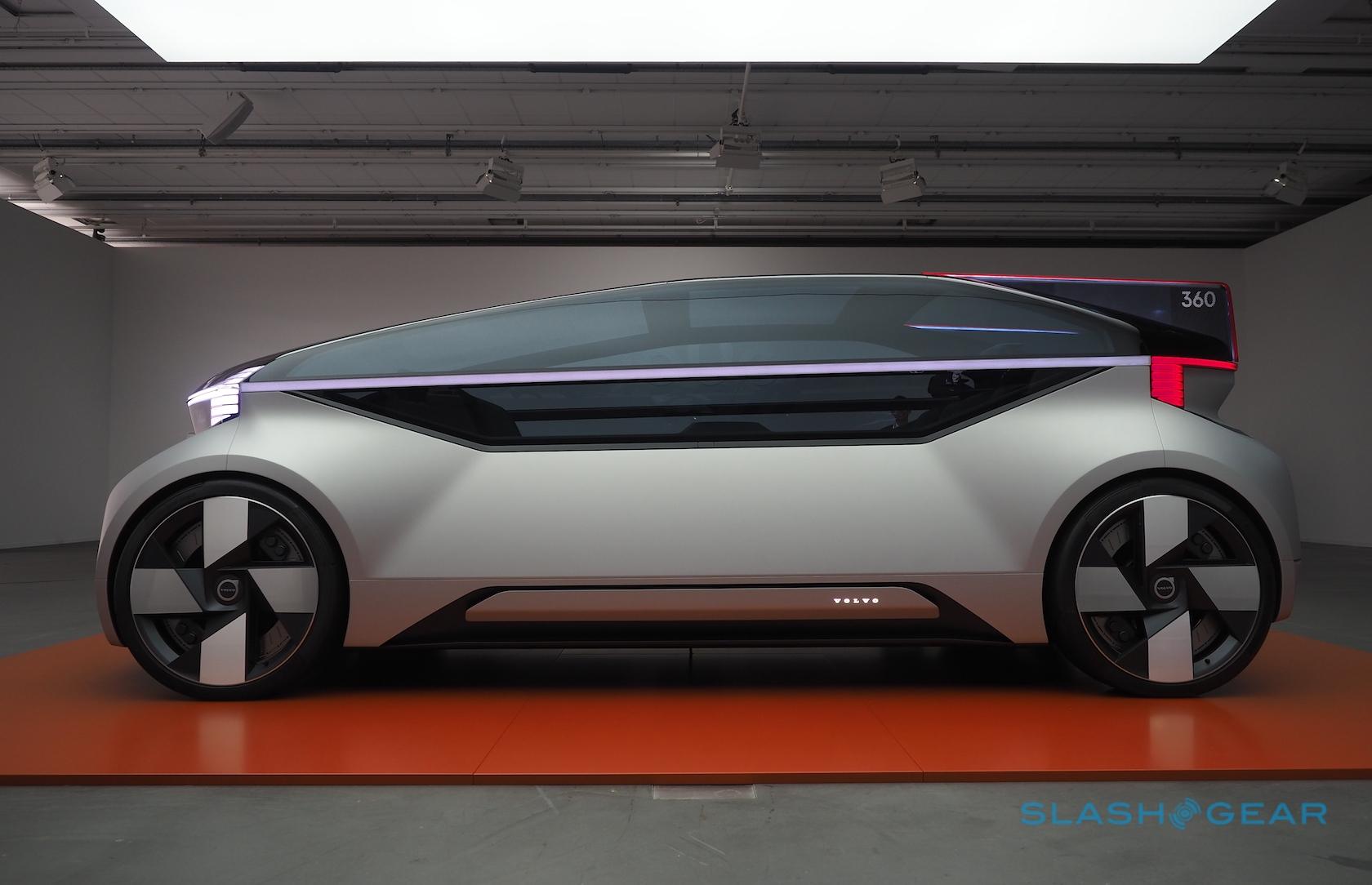 Combined with that is lashings of glass, with the side panels in particular dipping deep into the bodywork. The full panoramic sunroof, too, emphasizes light and space inside, though Volvo has a second intention there. Each pane would also be a transparent display, able to mirror information from your smartphone or laptop, or show content from the car.

Electric cars in production are shifting toward a longer wheelbase-to-length ratio, as automakers get to grips with the size benefits of smaller, separate motors dedicated either to a specific axle or even a single wheel. Still, we’re not quite at the 360c point yet, something Volvo’s designers do admit could require careful engineering in order to maximize safety. Still, seeing just how much space is inside the 360c compared to even a full-sized SUV with a similar footprint is eye-opening. 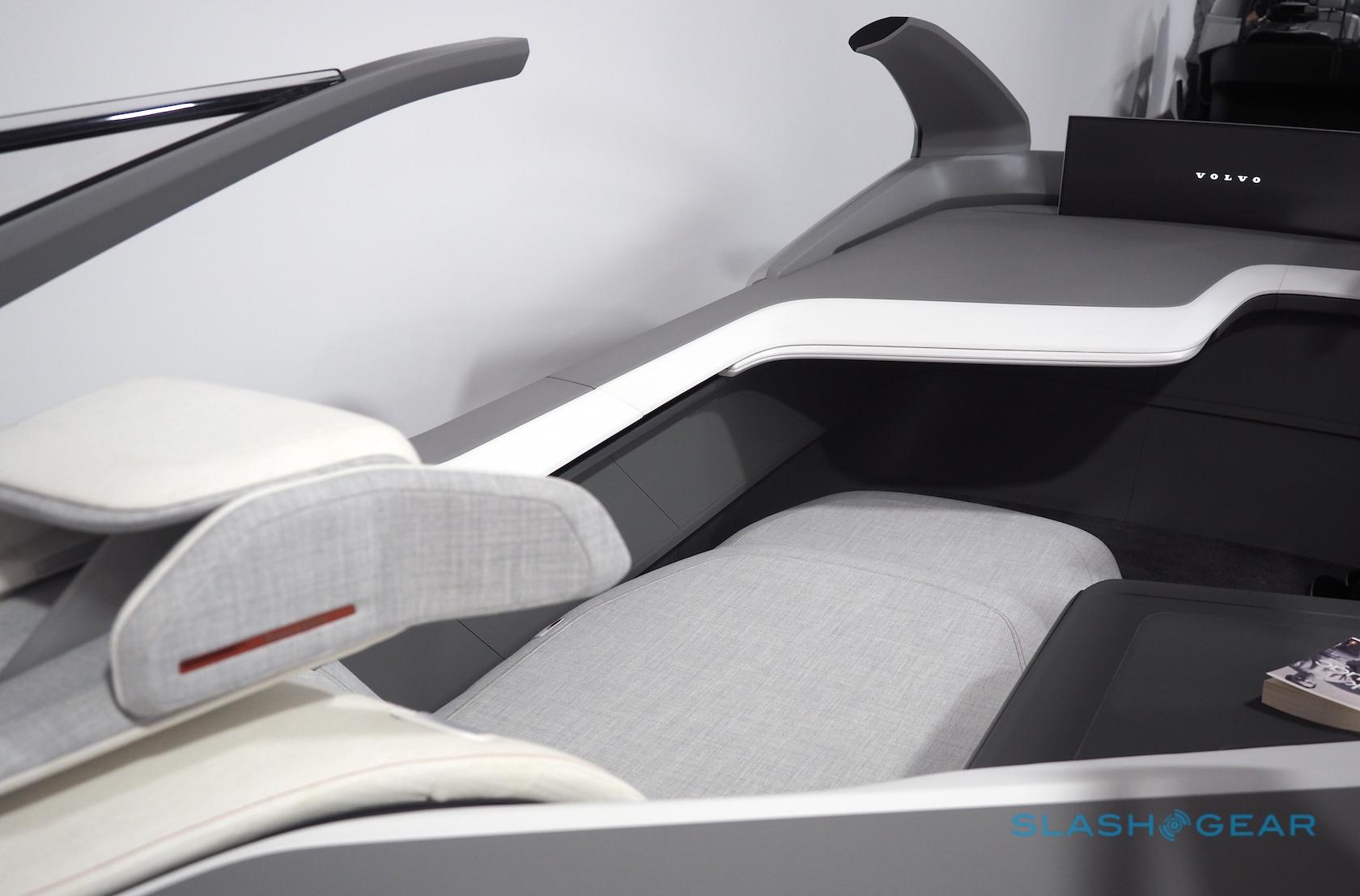 A fix to “Is that my Uber?” confusion

Not since the 1950s have tail-fins been quite so bold as they are on the 360c. Picked out in red LED strips, the translucent panels give the car a sense of momentum and urgency that’s visually appealing, in addition to helping with aerodynamics. However Volvo also intends them to have a more functional purpose. 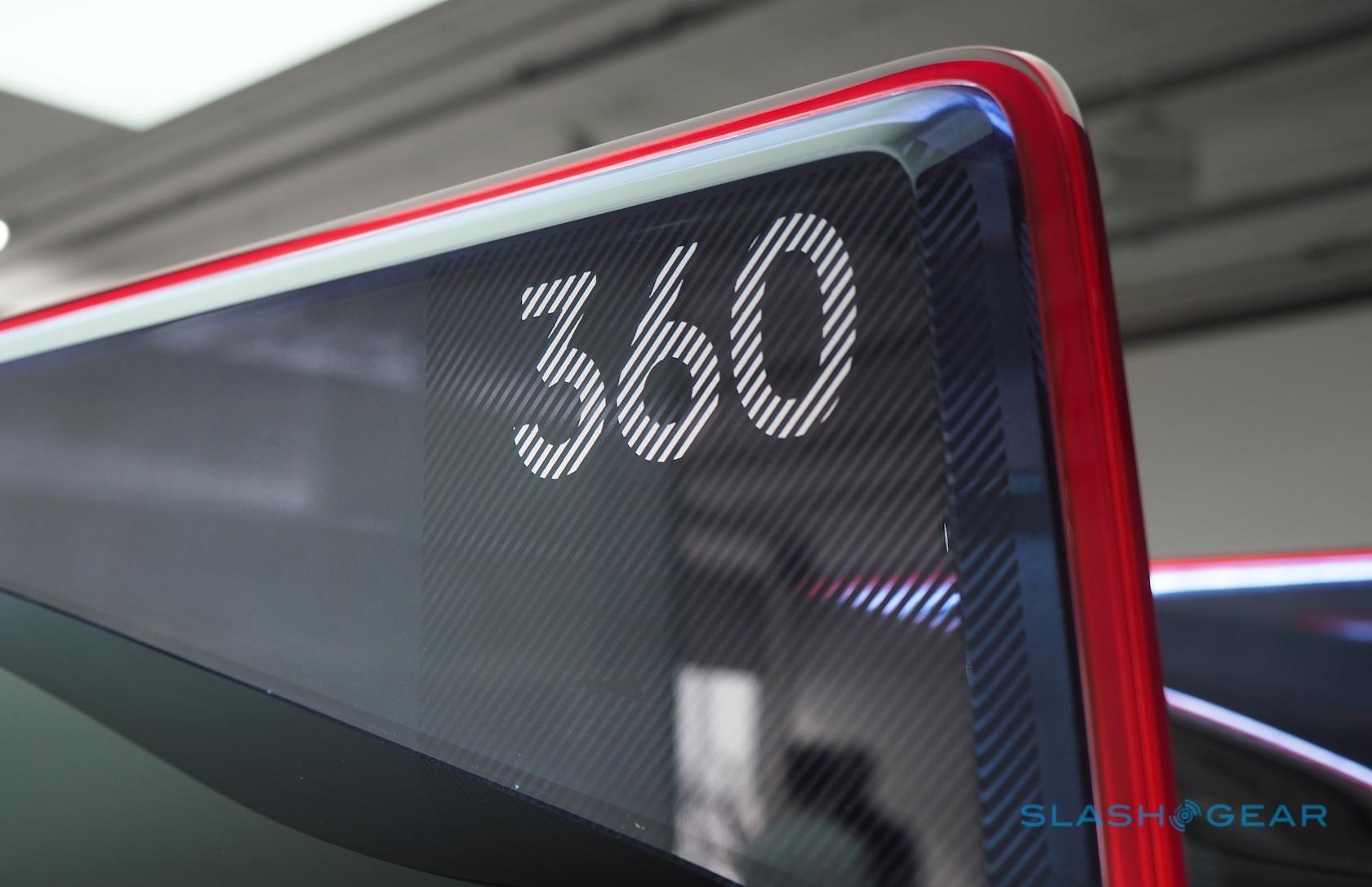 Each fin, the automaker suggests, would also be an embedded display. While the concept car shows “360” in reference to its name, a production version would be able to show all manner of alphanumerics or graphics. If you’re waiting on a ride-share car from Uber or Lyft, for instance, the 360c’s fins could show a unique number: much easier to locate than trying to recognize a license plate listed in the app.

Alternatively, the screen could show a taxi’s medallion, or even branded information to signify the vehicle was being used for a specific event. If you’ve ever walked out of an airport and tried to spot your Uber among the long row of waiting cars, the idea of being able to run your gaze across a row of glowing numbers and quickly identify which is yours is likely to be very appealing. 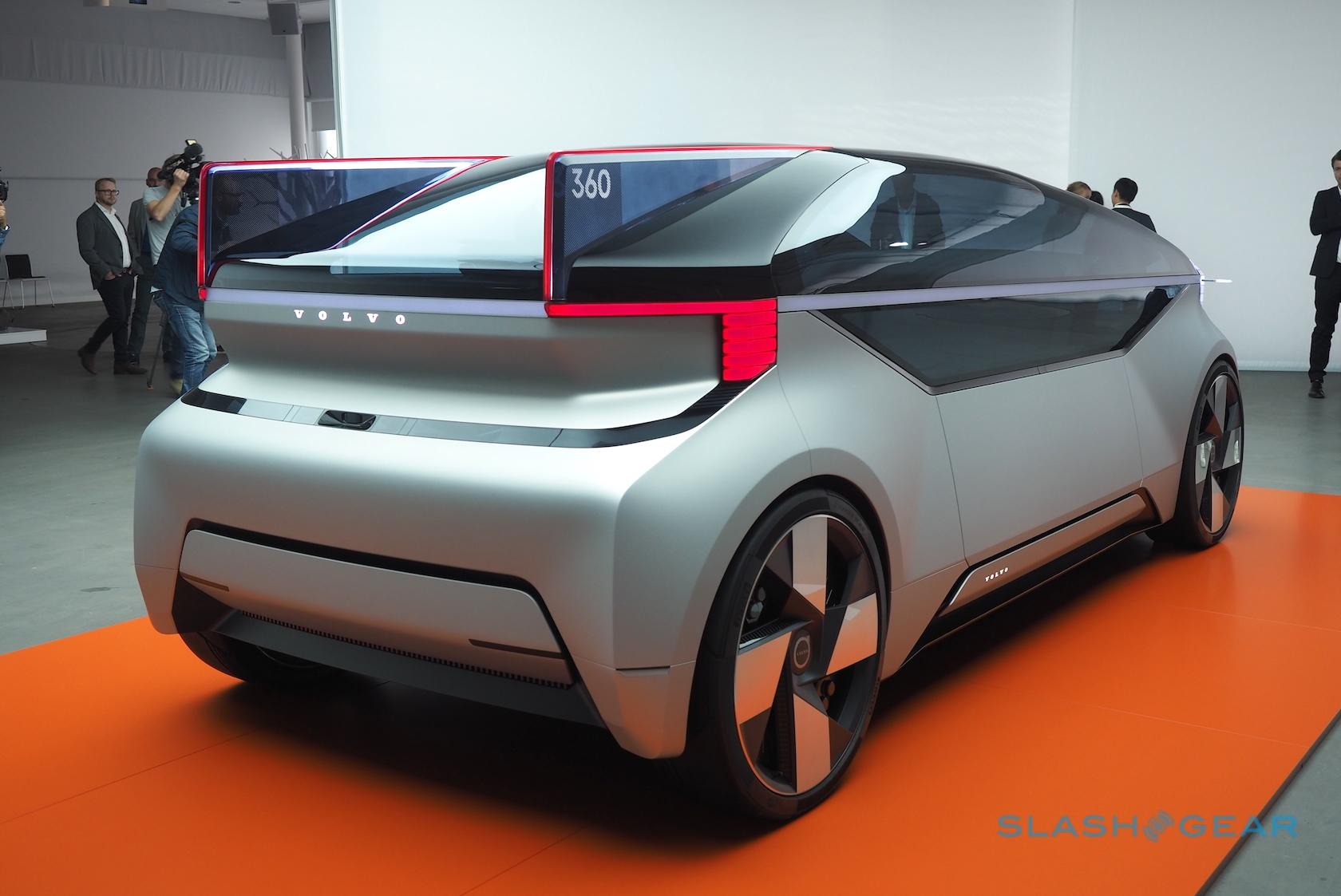 The 360c’s LED light bands are all well and good if a pedestrian is looking the car’s way, but what if they’re staring at their smartphone, don’t hear the EV coming because of their headphones, or simply aren’t paying attention to the road? Volvo came up with a way to deal with that, a new twist on the old-fashioned horn.

It uses ultrasonics, courtesy of piezo electric emitters mounted in the front of the car. Although Volvo’s designers have a whole range of sounds that the 360c can play through external speakers – such as a “breathing” effect that’s meant to signify the EV is stationary and idle – the ultrasonic horn is much more targeted. In fact, Volvo says, it can very precisely focus it with a narrow beam. 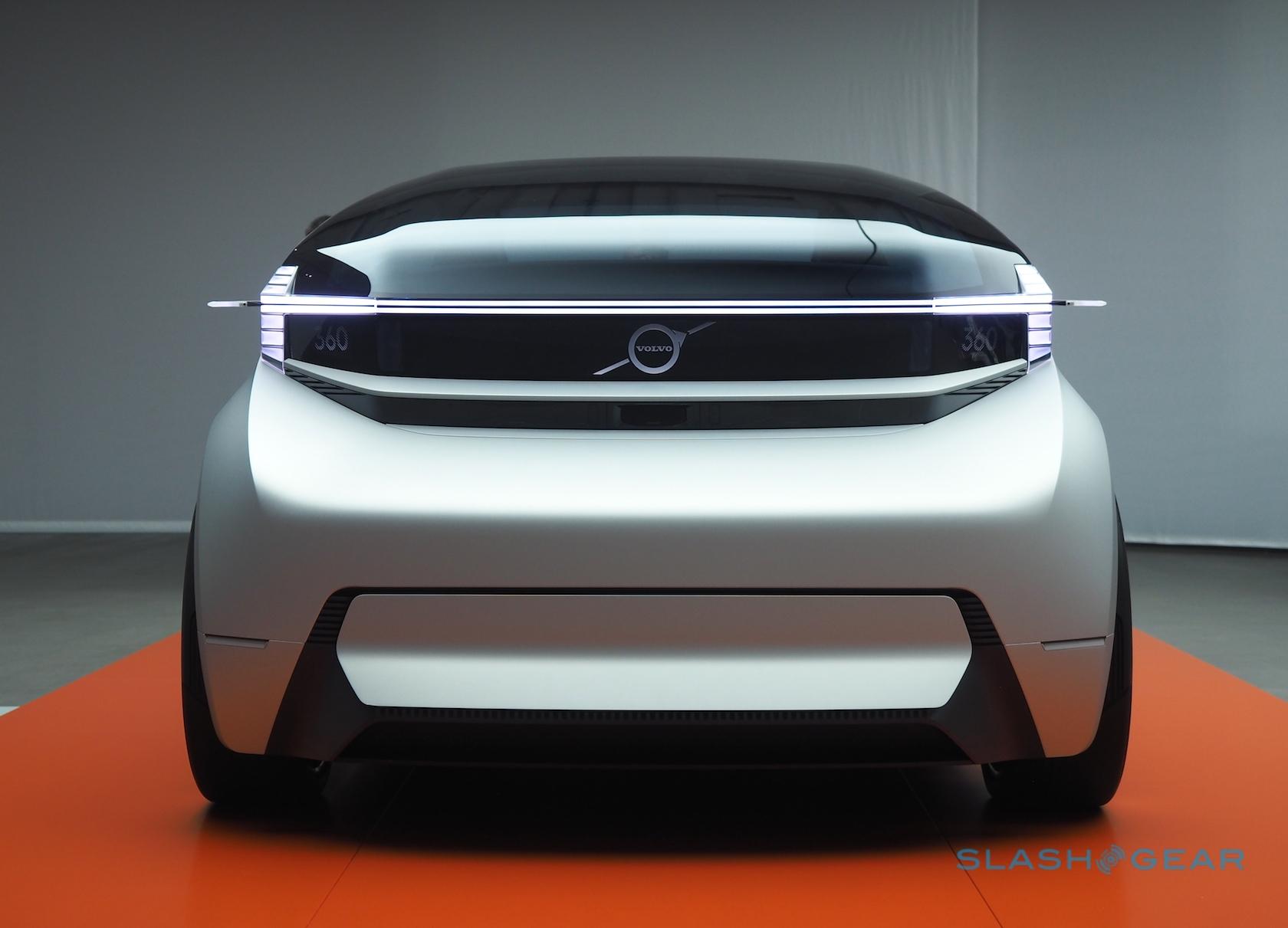 That way, it can direct the “horn” only at a person who has walked out in front of the 360c. The ultrasonics cause resonation within the pedestrian’s body, meaning they’ll hear a sound even if their ears are blocked by headphones or clothing. As a welcome side-effect, cities could be less noisy in general, as the ultrasonic horn would be unnoticeable by anybody outside its targeted beam.

Volvo has some history with the three-point seatbelt. After all, the automaker invented it back in 1959, only to offer up the technology to the rest of the industry in the name of improving road safety. Now, as cars are being used in more unusual ways, Volvo is trying to reinvent the safety restraint again. 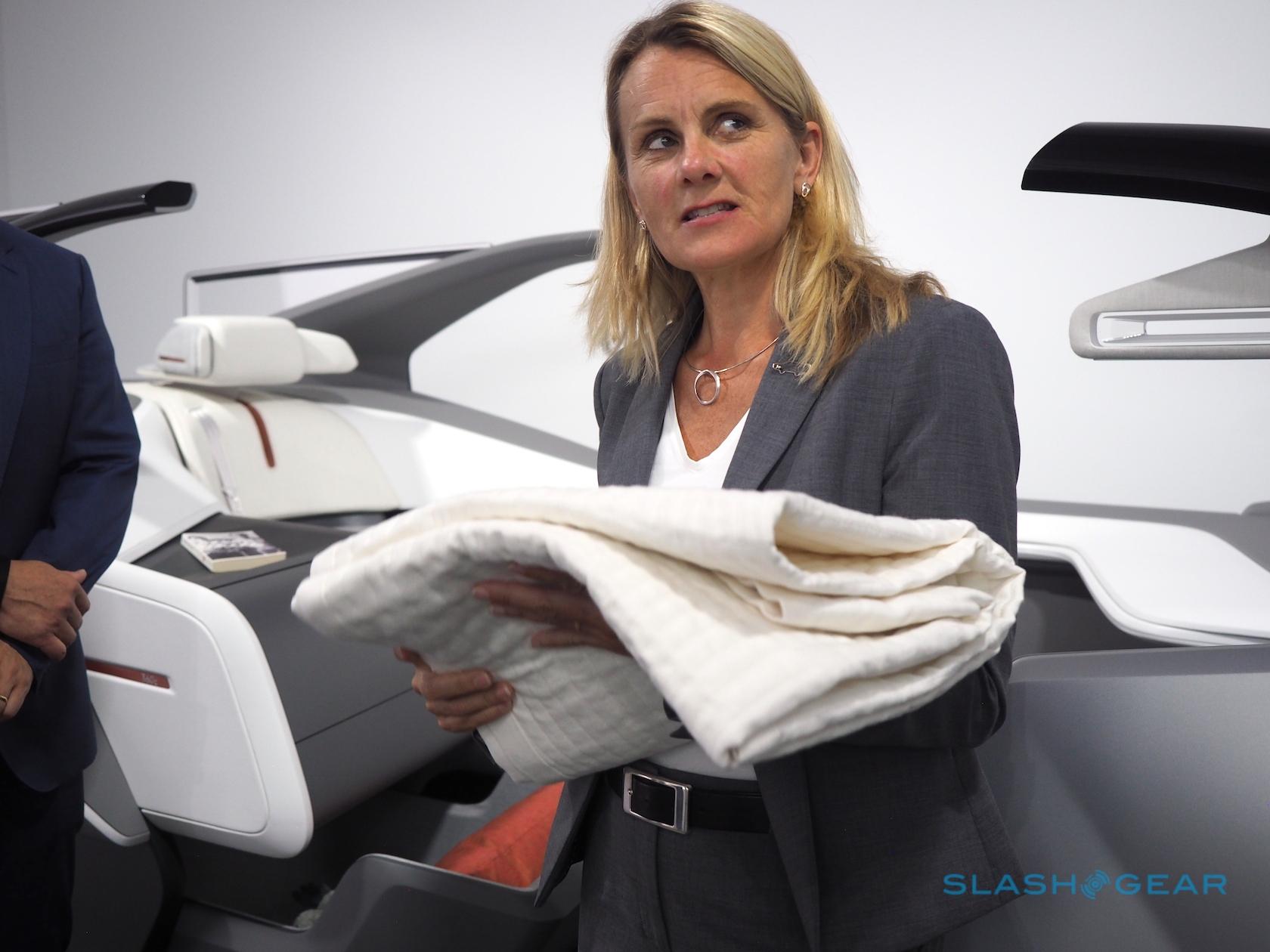 The result is a literal safety blanket, designed to be just as effective when someone is lying down as it is when they’re sitting upright. Normally, Volvo’s Lotta Jakobsson, Senior Technical Expert for safety, explains, it would be a cosy addition to cabin comfort, potentially even heated or cooled. However, in the event of a crash, restraints integrated within the blanket would tighten across the strong parts of the body, like the shoulders and hips.

Volvo hasn’t come up with a functional prototype yet, at least not one it’s ready to show off publicly. The idea, though, is that the blanket would be connected to a number of points within the car, and then its position in relation to the user’s body would be monitored. You’d be able to choose how tightly it held you in normal use, but the system would automatically understand which internal straps and other systems to tighten in a crash situation. 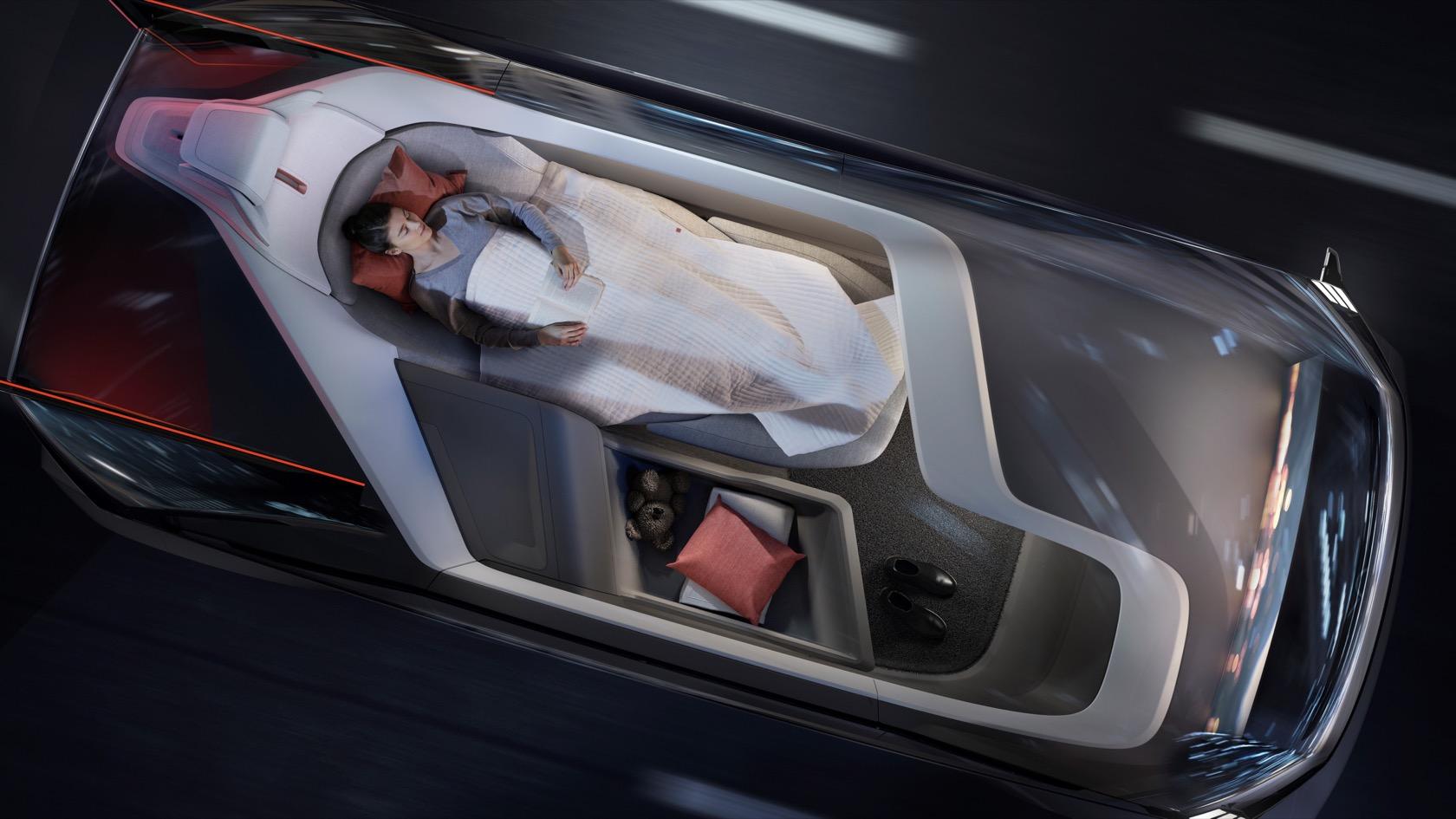 The motivating factor, Jakobsson explains, was the sleeping cabin design for the 360c, which replaced the typical seats with a single bed. That wouldn’t work with a traditional three-point seat belt. However, even in a regular car, the idea of a more comfortable safety restraint that holds occupants more intelligently seems like a great idea.

Electric cars are much quieter than their internal-combustion counterparts, and that can pay dividends in terms of city noise levels. Problem is, it can also lead to problems with other road users – whether driving or on foot – not necessarily hearing an EV approach. Right now, mandatory noise emitters mean each electric car has to play a sound when under a certain speed, so that we’re more likely to recognize that it’s there. 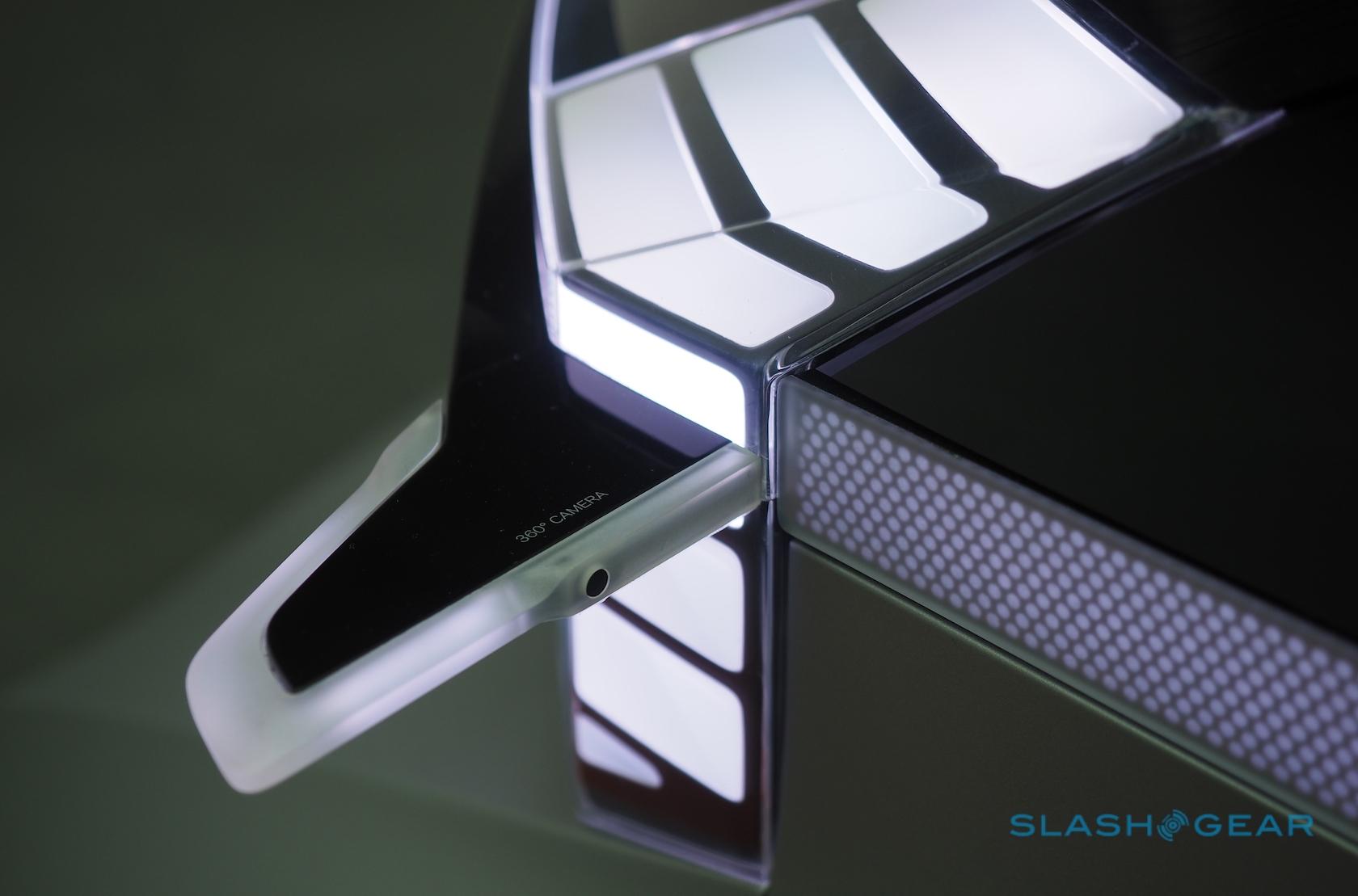 Volvo agrees with that in principle, but the 360c delivers it in a far more elegant way. In isolation, there’s a combination of sounds and lights which indicate that the car is turned on, idle, about to move, or picking up speed. However since each 360c would be connected, a fleet in proximity could manage sound more intelligently.

If three cars were parked near each other, for example, each could cut its idle sound volume by a third. A row of 360c EVs in motion, meanwhile, could leave the main audio duties to the first in the line; those lined up behind it would have less need for emitting an active sound, after all. The result, Volvo suggests, wouldn’t be less communication with the rest of the world, but smarter implementation that minimizes unnecessary noise pollution.

All the mod-cons of home

Some of Volvo’s ideas for the 360c’s cabin are more flippant than others, but that only makes them more desirable. In the sleeping cabin concept, for example, Volvo’s Tisha Johnson, Vice President of Interior Design, and her team found space for a full sink. That would emerge from the retractable tabletop, and allow a passenger to freshen up at the end of a long autonomous trip. 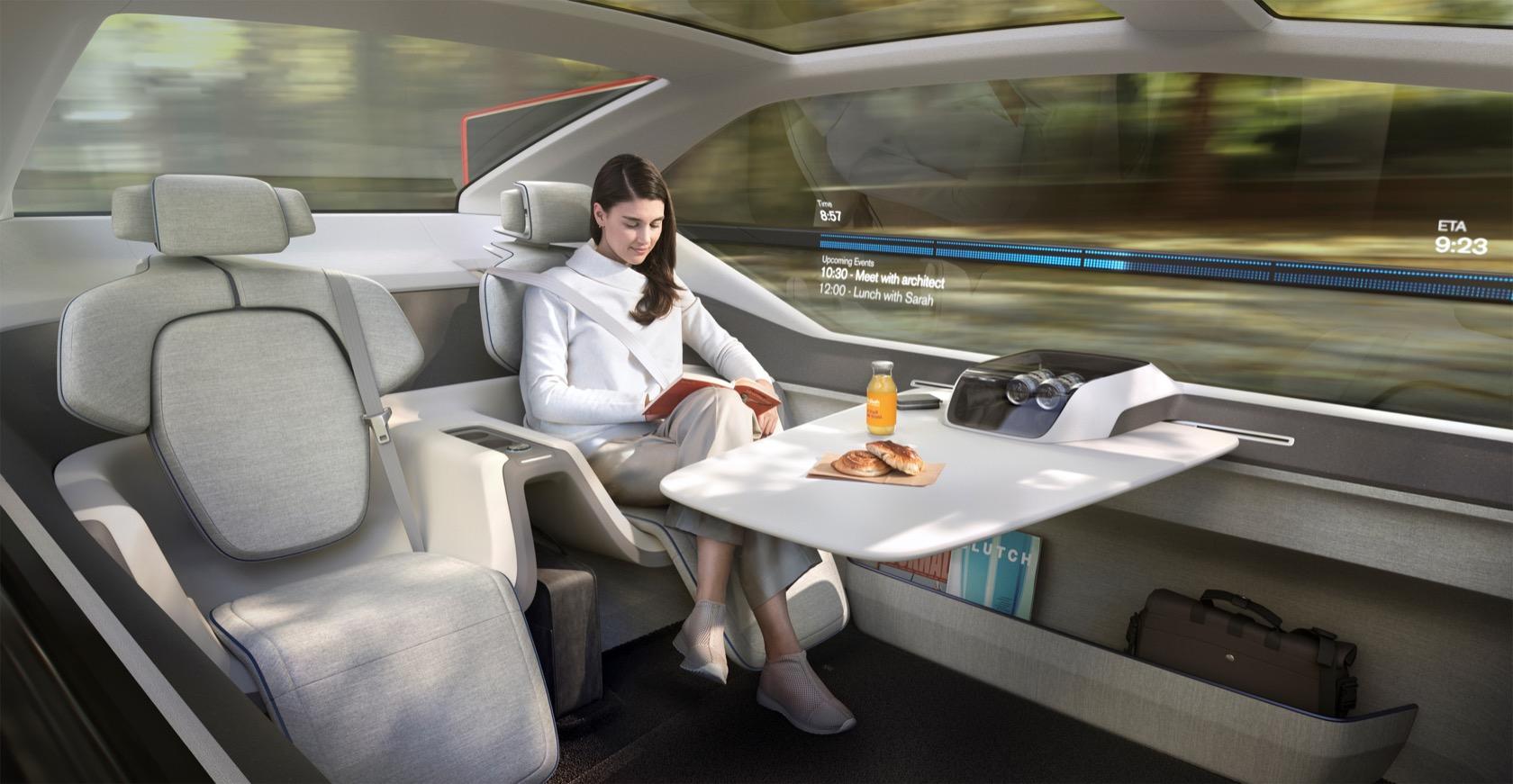 A little more practical, meanwhile, was an integrated coffee machine. Built into the 360c’s central table in a four-seater cabin concept, that could do barista duties for when you’re in need of caffeination on the move.

In reality, a full bean-to-cup machine capable of producing the perfect frothy cappuccino probably isn’t going to show up in a production car any time soon. Still, we wouldn’t argue with some sort of coffee-making functionality as an adjunct to the mini-fridge many luxury cars offer.