It’s not quite humans as fleshy batteries, Matrix-style, but Vodafone’s latest attempt to coax talktime out of its users is pretty close. The carrier has put together a number of prototype sleeping bags – just in time for festival season – it’s calling “Recharge Bags” that convert your body heat while sleeping into electricity for your phone. Eight hours of sleep is good for 24 minutes of talk or 11hrs of standby, though the future could be a phone that recharges simply by sitting in your pocket, and wireless sensors for the Internet of Things that don’t require any external power source.

That may not sound like much, but given it’s being created with no extra input on the user’s part, it’s certainly better than nothing. The system uses thermoelectric materials developed by the Electronics and Computer Science Department at the University of Southampton, UK, with specially printed circuits that can convert heat into power.

The research began in 2003, project lead Stephen Beeby says, though the ability to print materials has only come in the past few years. The system combines multiple printed thermocouples, which create current and voltage when heat passes through from the warm side to the cool side.

Beeby’s thermoelectric modules can then be sewn into fabric, such as the Recharge Bags for sleeping, and the Power Pocket shorts which – after a full day of walking and dancing – can provide a smartphone with four hour’s worth of charge. Although it may seem like a gimmick, Vodafone’s trials will help develop more resilient modules, that can cope with being folded and flexed as we demand from materials. 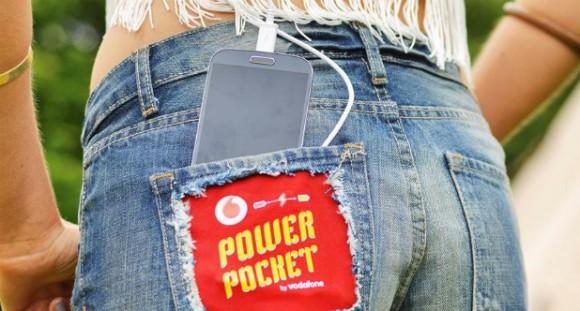 However, there’s more to the research than just running a microUSB cable from your pocket to your phone. One of the thermoelectric power harvesting projects the University of Southampton team has worked on is creating what are in effect vampire wireless sensors which can suck energy out of the ambient temperature of the room and use it to gather data and push it over a wireless network.

That has big potential for the Internet of Things – the concept where every device has a connection and can talk with each other – since it would mean data gathering would be possible even where laying down power connections would be impractical. Getting the levels of efficiency to the point where something meaningful can be done is still a headache, but future iterations could gather environmental data, collect human movement and biometrics from sensors laced into clothing, and create ad-hoc personal area networks from sensor-nodes distributed across the body.