Vive Cosmos Elite headset is getting a standalone release

The Vive Cosmos Elite is HTC’s latest and greatest VR headset, but it’s only available in a bundle with two Vive Base Stations and two Vive Controllers. At $900, that bundle costs a significant amount of money, and it more or less becomes cost-prohibitive for current Vive owners who might only want to upgrade their headsets. Good news: the Vive Cosmos Elite headset will soon be offered on its own, making it less expensive for existing Vive users to upgrade.

So, if you’ve already got some of the hardware that’s included in the Cosmos Elite bundle – the base stations and the controllers specifically – you won’t be stuck buying duplicate hardware just to upgrade your headset. In addition, HTC will offer the External Tracking Faceplate as a standalone accessory, which can be used to upgrade standard Vive Cosmos headsets.

While the standalone headset will be less expensive than the hardware bundle, it won’t exactly be cheap. HTC will offer the standalone Cosmos Elite at a $549 price point, but it is worth noting that it will include an External Tracking Faceplate, so you won’t need to buy that separately. The faceplate, on the other hand, will cost $199 on its own and can be used with base station versions 1.0 and 2.0 along with both the original Vive and Vive Pro controllers. 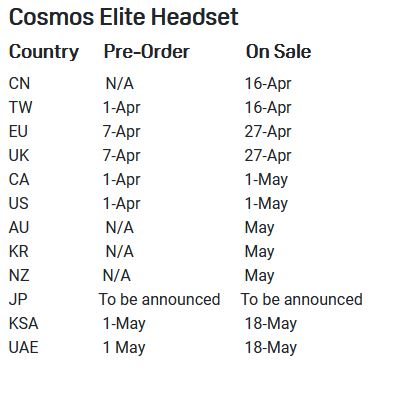 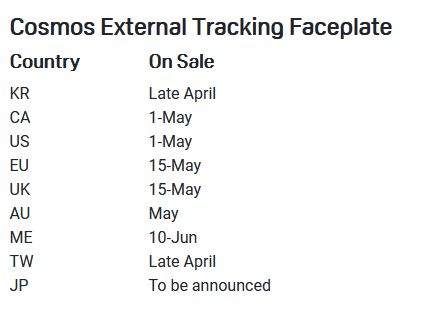 You can see pre-order and on-sale dates for multiple regions around the world in the image above. Given the current health crisis, it may not be a bad idea for prospective buyers to order one of these headsets ahead of time, because we could easily see some shortages of the Vive Cosmos Elite similar to what we saw with the Valve Index if demand is high enough.