Vine will be reborn as Vine Camera, but don’t get too excited

Twitter’s decision to axe the Vine app came as a big surprise back in October, but now we know what will become of the short looping video service. Come January, the Twitter-owned service says, Vine will become Vine Camera, a “pared-down” app focused pretty much solely on creating short clips for sharing on Twitter. Meanwhile, there’s news for those wondering how they’ll be able to take their Vine audience with them.

Given Twitter’s main priority is, well, building Twitter, it’s unsurprising that Vine Camera will be all about sharing on that platform rather than a standalone service. Arriving in January 2017, Vine Camera will effectively be a video-only app; from the sound of it, it’ll actually record longer clips if you want it to. However, only those 6.5 seconds or less will loop when played on Twitter.

The current Vine website, meanwhile, will be retained as an archive (or a shrine, if you want to get emotional about it). If you want a copy of your existing Vines, that can be done through the iOS and Android apps, or alternatively at Vine’s website. However, the exact contents of that archive will depend on which you use.

If you download via the app, you’ll get the videos alone. They’ll be saved to your camera roll, but you won’t have captions or anything else. If you want those – as well as the number of likes, comments, and revines – you’ll need to download via the website. That will send you out a download link when the archive file has been created.

Videos will be sent as MP4 files, with accompanying thumbnail images. A browser-based page will allow you to view locally-stored copies on your computer. Either way, though, there’s no way to save any VMs or comments, unfortunately. 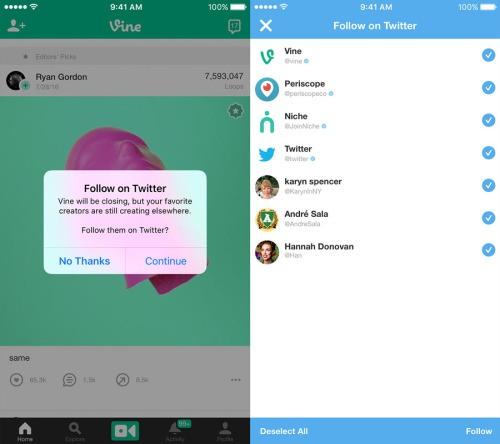 As for those who have built up a sizable following on Vine, and want to take those fans with them over to Twitter, there’s good news and bad. When the Vine app finally begins the process of shutting down, you’ll be able to connect your Vine and Twitter accounts as long as both are public. Followers on Vine will be prompted with your Twitter persona.

However, they won’t automatically be transitioned over: you can’t have all your Vine followers auto-follow you on Twitter. The dialog box Vine is showing offers a list of all the current Vine creators a user follows and checkboxes to continue that over on Twitter. Vine says the feature will be launched closer to shut-down.