Vimeo may not be the video service you go to, but changes introduced today may change that. The streaming media service today is rolling out changes to their mobile website, aimed at getting people watching and sharing more than they ever did via Vimeo. According to Vimeo, the mobile site now does a few things well, but no longer attempts to recreate the desktop experience on your phone or tablet. They’ve even rolled in the ability to save videos for viewing later, should you not have an account or forget to sign in.

The new mobile site also reduced the on-screen fussiness of its former self, instead bringing videos front and center and relegating the settings and such to the background. A blue “V” at the top left of the screen houses things like navigating home, featured videos, and the choice to login or sign up. 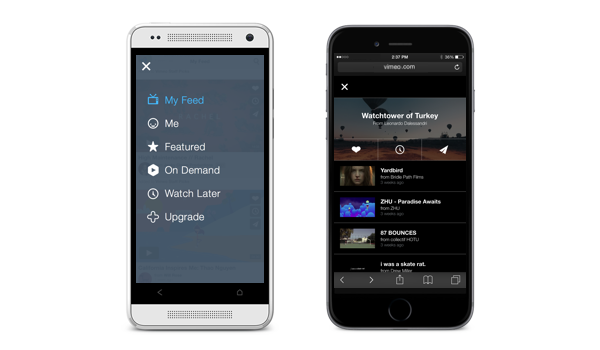 ‘Watch Later’ is also coming to all, and no longer requires a sign-in to save videos for viewing in the future. Vimeo also promises easy ways to share those videos you watch, and recommendations for those who aren’t signed into the service.

The goal seems to be sharing, and encouraging users to send videos along without having to be signed in to do so. From there, Vimeo gains exposure, something they probably need in the face of YouTube and the possible onslaught of Tumblr/Yahoo’s rumored video service.