We’ve a soft spot for Viliv, since the Korean company have actually managed to get more than one MID and/or tablet device onto the market rather than just push out renders, and so the company’s new Viliv X10 slate is all the more interesting.  LaptopMag grabbed some hands-on time with the 10-inch 1366 x 768 16:9 capacitive touchscreen tablet, complete with an unspecified ARM-based processor that’s 1080p HD capable.  Connectivity puts the iPad in the shade, too, with HDMI, an SD card reader, USB and WiFi, and Viliv reckon there’ll be options for 3G and WiMAX too.

Interestingly, while Viliv were showing an Android-based X10 – running OS 2.1 for Computex, but getting OS 2.2 Froyo in time for the slate’s launch – Microsoft had the same hardware running Windows 7 at their booth.  No word on whether it will be offered alongside the Android model, or was just put together to bolster Microsoft’s line-up.

According to LaptopMag, both 720p video playback and 3D gaming were smooth and impressive on the X10, with the latter using the slate’s accelerometer to navigate a racing title.  Battery life is tipped at an iPad-matching 10hrs, and while Viliv aren’t saying when exactly the X10 will go on sale, it’s apparently “coming along nicely”.  Now we just have to hope pricing is palatable. 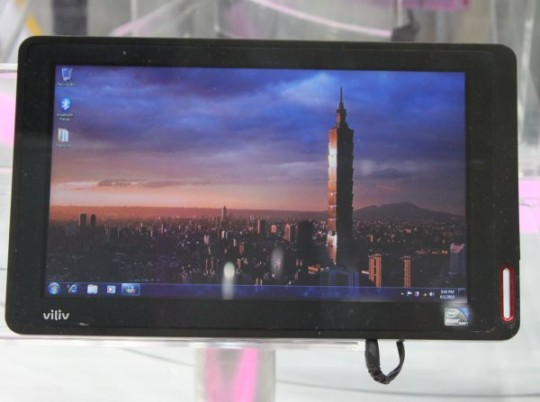