This week we’ve been getting a look at a whole handful of Android tablets at IFA 2011, one of the most inexpensive of which being the ViewSonic ViewPad 7e. The “e” in the name here stands for “Entry” aka “Entry-Level” meaning that it’ll certainly be ViewSonic’s least expensive tablet on the market for the time being. We got the opportunity to take a close look at this lovely white-bordered Android tablet and we’d just love to show you what it’s all about.

For those looking to get into Android via a unique look at the Android operating system as it’s topped by one of the coolest 3rd-party user interfaces on the market, this is your device. The user interface you’re seeing here is not your average Android 3.2.x Honeycomb experience, instead being called Viewscene 3D, an interface designed by the same folks who developed SPB Shell 3D, a homescreen replacement app quick we’ve reviewed over on our sister site Android Community. ViewSonic worked with that development team to create a great looking out of the box experience with, again, what they’re calling Viewscene 3D. You’ll see the coolness of the look and controls in the hands-on video below.

This device is introduced to us amongst about a billion other rabid technology fans, so you’ll have to bear with the noise, but it’ll be worth it once you realize what you’re seeing here. ViewSonic presents a tablet with a 7-inch display at 1024 x 600 pixel resolution, Android 2.3 Gingerbread, and a 1GHz single-core processor with 512MB of RAM. Along the side you’ll find all the ports you love so very well, that being a miniUSB, microUSB, power port, headphone jack, and microSD slot for expansion of memory by up to 32GB should you want to hold every single app you’ve ever downloaded at once. 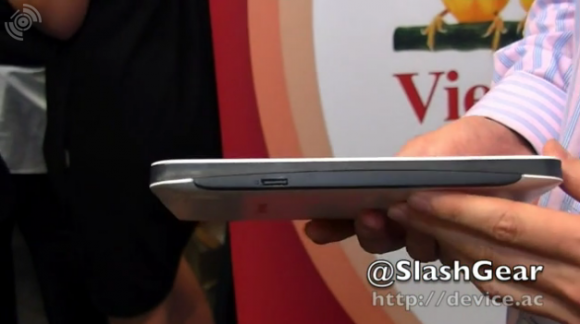 You’ll be getting a 3 megapixel camera on the back, a VGA camera on the front for video chat, and the whole device is made of mainly plastic. This device will be available for the bargain price of 149 Euros or around $199 USD and will be released inside September of 2011.