Verizon have launched an offensive against the iPhone, with a new campaign called DroidDoes.com for their upcoming Motorola Droid Android smartphone.  The handset, previously known by its codenames of Tao and Sholes, is being promoted as offering everything the iPhone eschews: an open development platform, the ability to run background processes, a flexible, open App Store and replaceable batteries, among other things.  Verizon have also set up a countdown timer which suggests that the Motorola Droid will arrive on October 30th 2009. 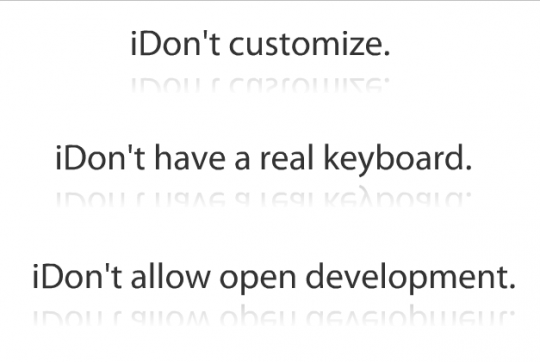 The teaser site begins with an Apple ad aping selection of statements, all using the i-prefix and in an Apple-style font in black on a plain white background.  However, while we’re used to seeing such adverts promote the latest flourish from the iPhone, in Verizon’s case they say such things as “iDon’t run simultaneous apps”.  Finally the site reaches a countdown page, with specifications of the upcoming Motorola smartphone listed; these include a 5-megapixel camera, hardware keyboard and Android 2.0, all features we’ve heard associated with Droid before.

The Droid is also expected to use a TI OMAP3430 processor, similar to that found in the iPhone 3GS, which should push the smartphone to considerably smoother performance than Qualcomm 528MHz based devices already on the market.  However it’s unclear how the TI chipset compares to Qualcomm’s 1GHz Snapdragon processor, already announced as powering the Acer Liquid A1 Android smartphone and tipped to appear in the HTC Dragon.