Verizon Wireless has quietly enabled VoLTE for iPhone 6 and iPhone 6 Plus owners, finally allowing for simultaneous voice and data use on the carrier’s handsets. The functionality, which can be turned on in the iPhone’s settings, shifts voice calls to over the 4G data connection.

To enable VoLTE on your Verizon iPhone 6 or iPhone 6 Plus, head into the settings and choose “Mobile”. From there, select “Enable LTE” and then select “Voice & Data” in the list. 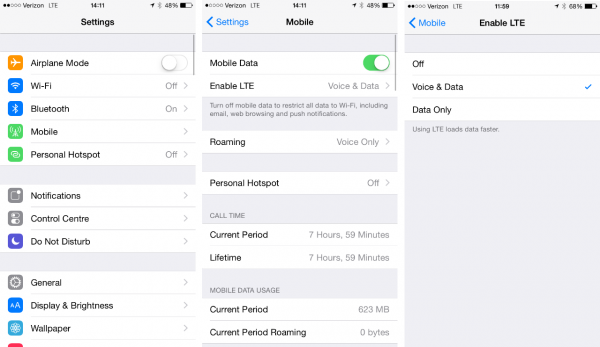 Verizon began switching on VoLTE support earlier in September, though since the system requires specific support within the phone’s firmware, few handsets could actually support it. Given the iPhone 6’s popularity, however, the number of people using VoLTE is likely to rocket.

The advantage is how VoLTE addresses one of the lingering criticisms of CDMA carriers, namely how such phones cannot maintain a 3G/4G data connection while simultaneously being used for a voice call.

Meanwhile, Verizon recently confirmed that it would be following rivals like T-Mobile USA in enabling WiFi Calling, where voice calls are routed over WiFi connections. However, that’s not expected to happen until mid-2015.

Thanks to everyone who sent this in!