Dell has dragged its Venue 11 Pro tablet back into the labs and given it a makeover, slimming down and speeding up the Windows 8.1 slate to better compete with Microsoft’s own Surface Pro 3. The new Venue 11 Pro 7000 now looks distinctly similar to the Surface Pro 3, in fact, and Dell has seemingly taken some inspiration from there when it comes to accessories and peripherals, too, with a mobile keyboard and an active stylus both on offer. That’s not to say the new Dell isn’t interesting in its own right, however.

Inside, there’s Intel’s Core M 5Y10a processor, a dual-core running at 2GHz, and Intel GT2 graphics, along with 4GB of memory and either 64GB or 128GB of solid-state storage. The display is a 10.8-inch panel coming in at 1920 x 1080 resolution, with a ten point capacitive touchscreen.

Connectivity includes WiFi 802.11ac 2×2, Bluetooth 4.0, and the option of an LTE/HSPA+ modem. There’s also a full-sized USB 3.0, a micro HDMI port, NFC, and a microSD card slot, together with an integrated dual-microphone array, speakers, and a sensor hub including a gyroscope, G-sensor, and proximity sensor. 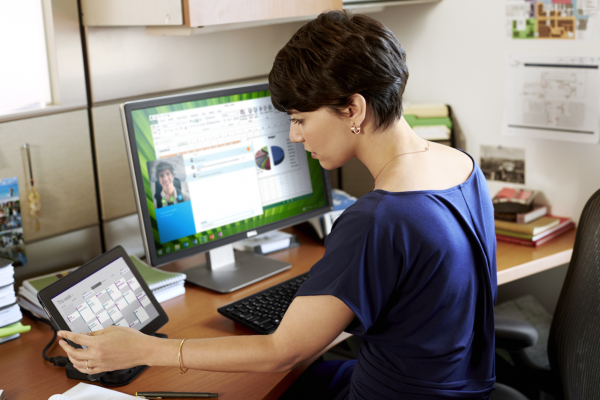 The mobile keyboard squeezes in not only full-sized keys but a rechargeable battery, and there’s a Tablet Dock for your desk which can hook up two monitors – via HDMI and DisplayPort – as well as a keyboard and other peripherals. Dell suggests the battery in the keyboard can effectively double the roughly ten hours of runtime the tablet itself is said to manage.

Sales kick off later in November, priced from $699 with the keyboard thrown in.