Valve takes a shot at Education

This week it appears that Valve and their wildly successful Steam platform for computer games are taking a giant leap into the realm of education. With their upcoming program Teach With Portals, they’ll be bringing a new edition of Portal 2 to the classroom for teachers to utilize its Puzzle Maker engine for teaching physics with computer-based creation tools. This program will have a limited number of Steam platform releases sent to schools for free for use in the classroom very soon!

Valve lets the world know this week that they’re centering their future plans for the education world around STEM. This word stands for Science, Technology, Engineering, and Math, and makes it extremely easy for educators to understand the possibilities inside this first release right away. With the Portal 2 Puzzle Maker engine, students will be able to create rooms with Valve’s own computer-based room constructor technology then run simulations using the next-level physics included in the game. 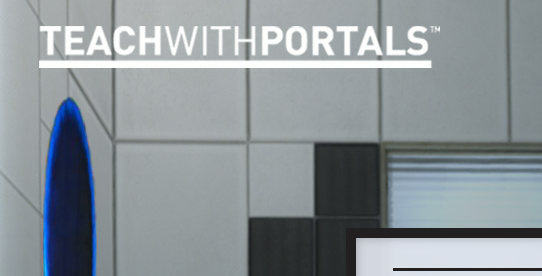 Have a peek at a few lesson descriptions included in this build:

Gravity
Students will be building their own experiment to calculate acceleration due to gravity in the game world. Students will decide how to build an apparatus that allows them to calculate the time it takes for an object to fall a certain distance within the game.

Terminal Velocity
Students will be building a simple experiment to compare the terminal velocity of a cube and Chell. Lesson includes a brief investigation into the math behind air resistance and terminal velocity.

Man on the Moon! Grades 11-12
This is a simple lab where students will be testing the effects of friction on falling objects. Students will demonstrate that friction, not mass, will slow objects in free fall. Students will derive the equation for the speed of an object in free fall using conservation of energy and show that mass is not a factor.

Also take a peek at a video filmed a few months ago when Valve was in an early stage of this project, with the Evergreen School visiting Valve:

For those of you that’ve never played Portal before: it’s a puzzle-based game in which you play the part of a character who must move through rooms using a Portal gun. This gun shoots two kinds of energy, one blue, one orange, that open up portals. Whatever goes in one portal comes out the other with the same speed and trajectory that it went in with. Knowledge in physics are immediately necessary in oder to grasp the concept of the game, and with this engine students will be able to blast forward in their learning of the concepts presented – and as it’s presented in a game format, there’s nothing holding them back!

Educators can find out more information on this program at http://www.teachwithportals.com/

We’re rather excited about this move on the part of Valve, not only because it’s fun and has a giant amount of potential, but because they’re doing it with no funding on the part of the schools and are giving it all away for free!