US internet getting faster but still trails Asia rates

Average internet speeds in the US rose by more than a quarter in the space of 12 months, one web company’s research suggests, though with an average rate of 7.4 Mbps America still sits in eighth place of the world’s fastest. The US just outpaced the global year-on-year change in Q4 2012, according to Akamai’s latest State of the Internet report, climbing 28-percent versus the 25-percent global average.

Still holding the top spot is South Korea, though Japan – with a year-on-year improvement of 19-percent – is closing the gap. Hong Kong takes third position. South Korea’s average rates are almost double those of the US, though the country actually saw a decline year-on-year. 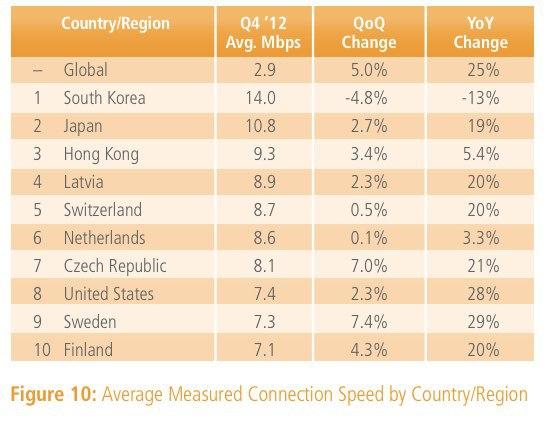 The research also looks at mobile connections, with data on mobile devices – according to Ericsson – doubling year-on-year. Average connection speeds varied considerably, however, from highs of 8 Mbps down to 245 kbps. Most popular requests from cellular devices indicate Androids hold the lead, with 35.3-percent of requests coming from Android Webkit. Mobile Safari came in second, at 32.6-percent, though was most popular when non-cellular devices – such as WiFi-only iPads – were counted too.

Globally, Akamai says that broadband adoption grew at 2.1-percent, though was slightly outpaced by what’s referred to as “high broadband” – that is, services offering speeds of above 10 Mbps – which grew 2.7-percent in the same period. However, speed isn’t the only thing that increased: Akamai counted a more than 200-percent increase in DDoS attacks, predominantly targeting commerce customers, with enterprise in second.