Unity and HERE team up to turbocharge cars’ digital dashboards

Navigation specialist HERE and game engine developer Unity have teamed up on a platform for next-gen infotainment systems, promising to streamline the creation of high-tech 3D interfaces for new cars. Though touchscreens have been growing in size in modern vehicles, it’s only in recent years that we’ve seen UI development accelerate as drivers increasingly expect the sort of interaction that they’re used to from their smartphones.

Problem is, while automakers are very good at making fast cars, efficient cars, or cars that can fit a family and their luggage, they’ve traditionally not been so great at dashboard software. There’ve been improvements on that front over the years, but HERE and Unity are aiming to stick some high-octane fuel in the process.

Unity for HMI basically does for dashboards what Unity does for games. Combining drag-and-drop graphics, real-time 3D rendering, and interactive city mapping from HERE, it can be used to mix together the HVAC, entertainment, navigation, and other features familiar from modern vehicles, but without the need to create everything from scratch. Automakers will be able to pull up common UI elements – like virtual buttons, dials, and menus – and combine them with their own themes and in-house color schemes.

Meanwhile, the same 3D project could be repurposed for different sizes and shapes of display. Rather than having to rebuild the interface from scratch each time, it could intelligently adapt to a high-end vehicle with expansive screens or to a more affordable one with a more mainstream display.

“While several dedicated HMI development solutions currently exist in the automotive industry,” Unity and HERE say, “this collaboration will combine elements of automotive-grade map data and services with an advanced real-time 3D engine that brings dynamic, high-end design capabilities to the automotive user-experience in terms of maps, infotainment and more.”

It’s not the first time we’ve seen a collision of game engine tech and screen-heavy automotive dashboards, mind. Last year, GMC revealed it had been working with Epic Games’ Unreal Engine, to build the infotainment system for the upcoming HUMMER EV. It’s part of the developers’ attempt to bring the same sort of accelerated platform for dash tech as it has to gaming. 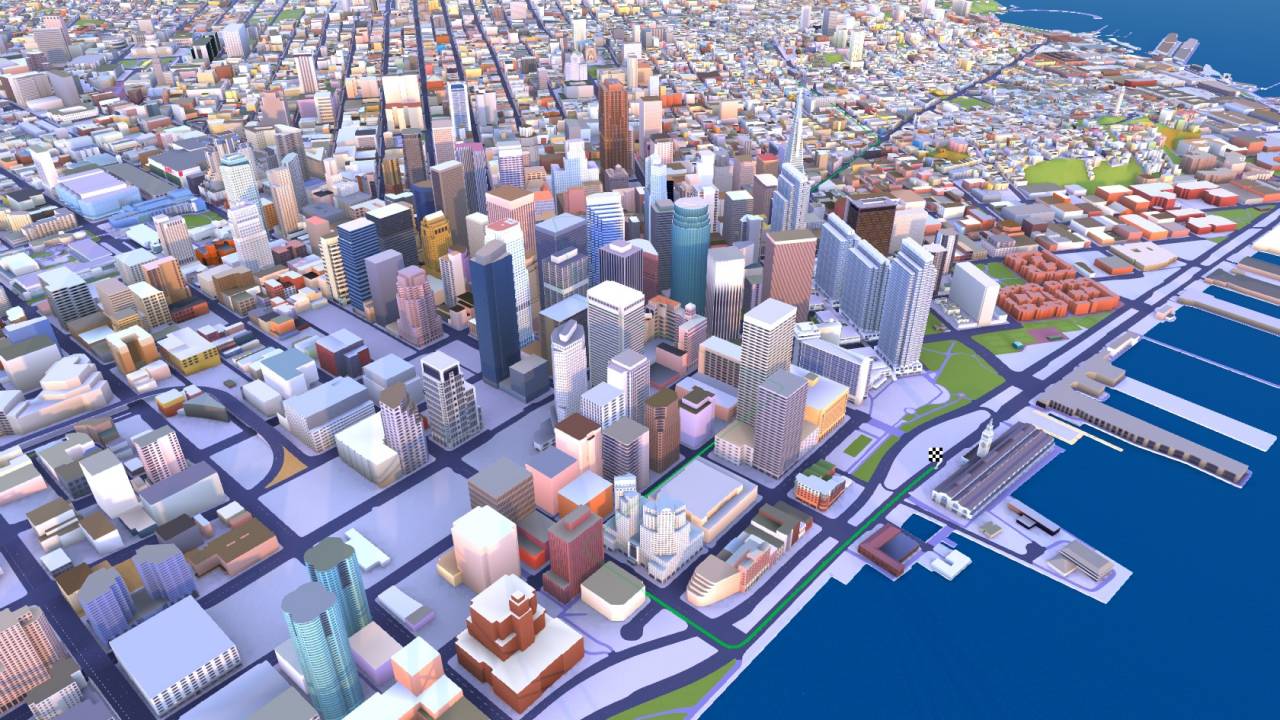 Nor, in fact, is it Unity’s first foray into automotive. Byton used the company’s graphical engine for the graphics on its vast 49-inch concept EV dashboard back in 2018, while Continental – which happens to be a co-owner of HERE – used the platform for its autonomous shuttle bus concept.

Keeping things flexible, HERE and Unity’s platform will run on a variety of hardware, including from Continental’s Elektrobit, NXP Semiconductors, and Qualcomm Snapdragon. It pulls in the 3D mapping data HERE has been building on dense urban areas, that it announced at CES 2021. HERE Premier 3D Cities is currently available for 75 cities – including San Francisco, London, Berlin, and Munich – built with a mixture of LIDAR, optical imagery, and satellite data to include not only renderings of individual buildings but metadata on things like entry points and more.

That degree of information could prove instrumental in the next phase of HERE and Unity’s collaboration. That’s expected to embrace location technology for autonomous driving, as well as simulations, city planning, and more. It’s a tricky thing to get right, as driverless vehicles will need to supply passengers with enough data to make them confident in the system’s ability to safely navigate traffic, while also not overwhelming them.

Meanwhile, the partnership could also see more realistic urban environments brought into games. Video game developers will be able to use Unity with the HERE 3D mapping and location data to create far more realistic city environments in their titles, potentially even including real-time updates.