A hotly-anticipated climate change report has issued an ominous warning on the rising global temperature, cautioning that the current pledges to reduce greenhouse gas emissions are woefully inadequate if the Paris Agreement targets at to be achieved. The UN Environment Programme (UNEP) Emissions Gap Report measures the disparity between what the world needs to do to tackle climate change, and what’s actually being done.

More specifically, that gap is the difference between current emissions, the projected drop in emissions that countries around the world have already committed to, and the actual level of emissions that the world needs to fall to. That goal, per the Paris Agreement, is a rise of just 1.5 degrees Centigrade by 2030.

Right now, though, we’re nowhere near achieving that. Indeed, on the current unconditional pledges made by countries, the UNEP report concludes, we’re in fact headed to a 3.2 degree temperature rise. “In 10 years of producing the emissions gap report,” UNEP says, “the gap between what we should be doing and what we actually are is as wide as ever.”

2020 must be the key turning point, the scientists insist. “On the brink of 2020, we now need to reduce emissions by 7.6 percent every year from 2020 to 2030,” UNEP says. “If we do not, we will miss a closing moment in history to limit global warming to 1.5 degrees C. If we do nothing beyond our current, inadequate commitments to halt climate change, temperatures can be expected to rise 3.2 degrees C above pre-industrial levels, with devastating effect.”

Not all countries’ emissions are created equal. G20 nations are collectively responsible for 78-percent of all the emissions, UNEP’s report calculates; only five of those members – the EU and four individual members – have actually committed to long-term zero emissions targets, however. Of that five, only two have actually passed legislation aimed at addressing the fall in emissions that the situation demands. 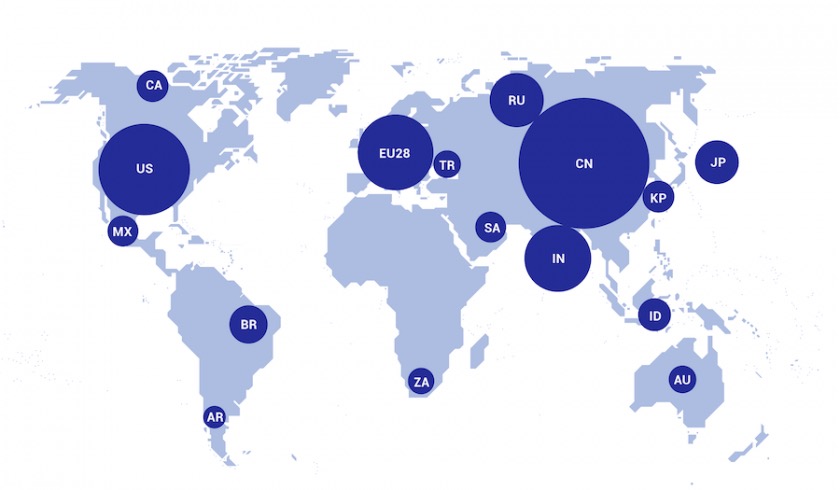 China, the US, the EU28, and India are the top four emitters of greenhouse gases, collectively responsible for over 55-percent of the total emissions over the past ten years. US President Trump began the process of withdrawing the United States from the Paris Agreement in early November 2019.

The risks are real

“There has never been a more important time to listen to the science,” António Guterres, UN Secretary-General, said of the report’s findings. “Failure to heed these warnings and take drastic action to reverse emissions means we will continue to witness deadly and catastrophic heatwaves, storms and pollution.”

All of the Nationally Determined Contributions, or NDCs, need to be raised in their ambition, the scientists concluded. They’re the goals each country commits to under the Paris Agreement. “Solutions are available to make meeting the Paris goals possible,” UNEP says, “but they are not being deployed fast enough or at a sufficiently large scale.”

It’s no small challenge. To hit the 1.5 degree C goal in 2030, at least a fivefold increase in the NDCs targets is required: a 7.6-percent cut in emissions per year from 2020 to 2030. Even if the target is 2 degrees C, that still demands a threefold reduction. Without it, there’s a significantly increased likelihood of mass extinctions, with the potential for huge swathes of the planet to be rendered uninhabitable.