Today on Martin Luther King, Jr. Day 2013, actress Nichelle Nichols – better known as Uhura from Star Trek: the original series, spoke with space exploration evangelist Neil deGrasse Tyson about her one legendary encounter with MLK, Jr., himself. While some of you Star Trek factoid aficionados may already know, it’s important today of all days to understand the importance of not only what Uhura represented to the future of our society on her own, but what her one talk with Martin Luther King, Jr. meant for the world as well. Listen in and/or read what this chat was all about and keep the spirit alive with a drop on over to Netflix for some cool original series action (they’re all up!)

What Chief Communications Officer Lt. Uhura represented to the world back when Star Trek’s original television show was originally on the air was a strong, black, female presence on the bridge. The bridge being up front and center of the Enterprise, the spaceship around which the entire show centered. As StarTalkRadio host Niel deGrasse Tyson recounts:

“The original Star Trek series was created, as many of you know, by Gene Roddenberry and was groundbreaking on many fronts. For me the most important feature of that show was that the deck of the starship Enterprise was international. Lieutenant Uhura herself represented – again this is the future – the United States of Africa. Not only was she there but there was representation from Asia, from Europe, from the Americans, and even planet Vulcan – of course, in the guise of Spock.

The point is, if you were a science fiction fan of the day, and you viewed how authors and producers portrayed the future, it was a future that did not include people of color. A really frightening prospect if you happened to have been a person of color.

And now comes the series of Star Trek, and you see a woman who is dignified, who has poise, who is not somebody’s maid, and who is in fact an educated communications officer of the deck of the starship Enterprise. And is fourth in command, by the way. And your vision of the future can change overnight.” – Neil deGrasse Tyson

Speaking about her aspirations for being a stage actress and ultimately hitting Broadway with her skills as a dancer and a singer as well, Nichols made it clear that she originally planned to only be on the show for a short while. At the end of the first season, in fact, she handed in her resignation to Roddenberry, who tried to convince her that her part was “more than just a role” and with choice words such as “don’t you see what I’m trying to do here” he implored that she take the weekend to think about her decision. 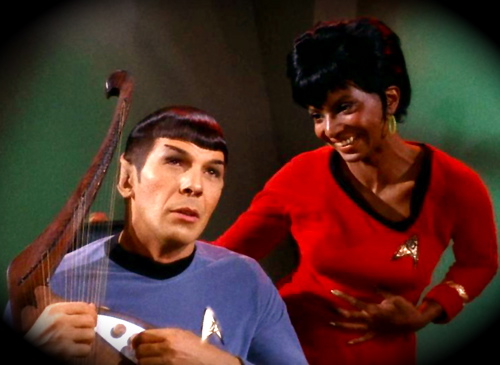 The weekend in question, Nichols was a celebrity guest (that Saturday night) at an NAACP fundraiser in Beverly Hills, California. This was 1967, by the way, right after the first season of Star Trek had completed filming. Nichols recounts what happened after she’d been formally greeted by the crowd:

“Just as I’m getting seated and getting ready to turn to the other celebrities, one of the promoters walked up from behind and said ‘Miss Nichols, sorry to bother you’, I said ‘no problem’, and he said ‘well there’s someone who wants to meet you, and he says’s he’s your greatest fan.’ And I’m smiling and I say ‘of course’ and I’m getting up to turn and say ‘where is he?’ and he says ‘right over here.’ And I’m thinking it’s a Trekker, you know, maybe it’s a child, maybe a little man – someone that just wants to congratulate me.

And so, delighted, I turn, and I see this man across the room with this brilliant smile – which you didn’t often see on his face. And I remember thinking to myself ‘whoever this little Trekker is, they’re going to have to wait, because this is my leader’ – Dr. Martin Luther King walking towards me with a smile on his face. And I never met the man, you know, this like I’m starting to tremble.

And he walks to me with this smile, he says – and puts his hand on my shoulder and says, ‘Miss Nichols, I am your greatest fan.’ I thought – ‘what an incredible moment.’ I just, was flabbergasted. And he begins to speak about my role on television, and the power of Star Trek, and how important it is.

In the meantime, for the first time in my life, I had no words to say. I could speak anyway, I’m shaking in front of this man. And he is saying how important Star Trek is to the future. That this man who has written this, who has produced this, has seen the future – and we are there, because you are there.

He said “you have one of the most important roles. This is a first. It’s non-stereotypical, it’s brilliance, it’s beauty, and it’s intelligence. And you do it with warmth and grace.”

And I’m just standing there watching him and listening to him, and I’m thinking the only visions I’ve seen of this man, really, are nightly on the news with marching, and black people in the south, marching and demanding their rights to sit at a lunch counter. And having fire hoses turns on them, attack dogs turn on them, men, women, and children, and this man leading them and marching and the face of all this. Being arrested.

Every night I ever saw him I said, ‘they’re gonna kill him. It wont happen past this time.’ But it did, and so he became this power, of hope. And here I am playing this character – that I’m going to give up – and I said to him, ‘Dr. King thank you so much, I’m going to miss my co-stars’ – before I could say ‘because’, he said ‘what are you talking about?’ And I said, ‘I’ve just told Gene that I’m leaving the show after the first season. Because I’ve received’ – and he said ‘you cannot.’

My mouth just dropped, and he said, ‘you cannot leave. Do you understand, it has been heavenly ordained. This is God’s gift, and onus for you. You have changed the face of television. Forever. Because this is not a black role, it is not a female role – anyone can fill that role.’ He said, ‘it can be filled by a woman of any color, a man of any color, it can be filled by another Klingon or an alien.’ He said, ‘this is a unique role and a unique point in time that breathes the life of what we are marching for: equality.’ He says, ‘besides, you’re Chief Communications Officer, you’re fourth in command!’

I’m thinking, ‘nobody told me that.’ He knows Star Trek is built on the Air Force, on the rankings, so he knew the rank. And he said, ‘you have no idea the esteem that we hold for you.’ And I start shivering. And I’m just looking at him, and my mouth was quivering. And he said, ‘Nichelle, you have no idea the power of television. This man has shown us, in the 23rd century, this man has created a reality. And because it’s in the 23rd century and you are Chief Communications Officer – 4th in command on a starship on a 5 year mission going where no man or woman has gone before. It means that what we are doing today is just the beginning of where we’re going.’

‘You cannot leave,’ and then he smiles again, and says ‘besides, Star Trek is the only show that my wife Coretta and I allow our children to stay up late and watch. And Nichelle, I can’t go back and tell them this, because you are their hero.'” – Nichelle Nichols

Needless to say, Nichols went back to Roddenberry and asked to stay with the show. She recounted the words King had spoken to her to Roddenberry and, with tears rolling down his face, he said, “God bless Dr. Martin Luther King, someone realizes what I’m trying to achieve.”

Have a peek at SlashGear’s full Star Trek tag portal for more of one of the greatest science fiction universes ever to have been birthed, and have a happy MLK day all day long!