Climate change caused by humans is having a huge impact on the Amazon rainforest and the last glaciers to succumb to melting, as new NASA data highlights the potentially catastrophic rising temperatures affecting Earth. Although observations of possible climate change-related events have been underway for years now, new findings paint a concerning picture of how some of the biggest ecosystems on the planet are struggling.

In the Amazon rainforest, it’s drying out that’s the problem. A study by scientists at NASA’s Jet Propulsion Laboratory in Pasadena, California analyzed decades of ground and satellite data, tracking moisture levels.

“We observed that in the last two decades, there has been a significant increase in dryness in the atmosphere as well as in the atmospheric demand for water above the rainforest,” Armineh Barkhordarian, lead author of the study and a researcher at JPL, explains. The findings suggest elevated levels of greenhouse gases account for approximately half of the surge in arid conditions. That has left the rainforest noticeably dryer. 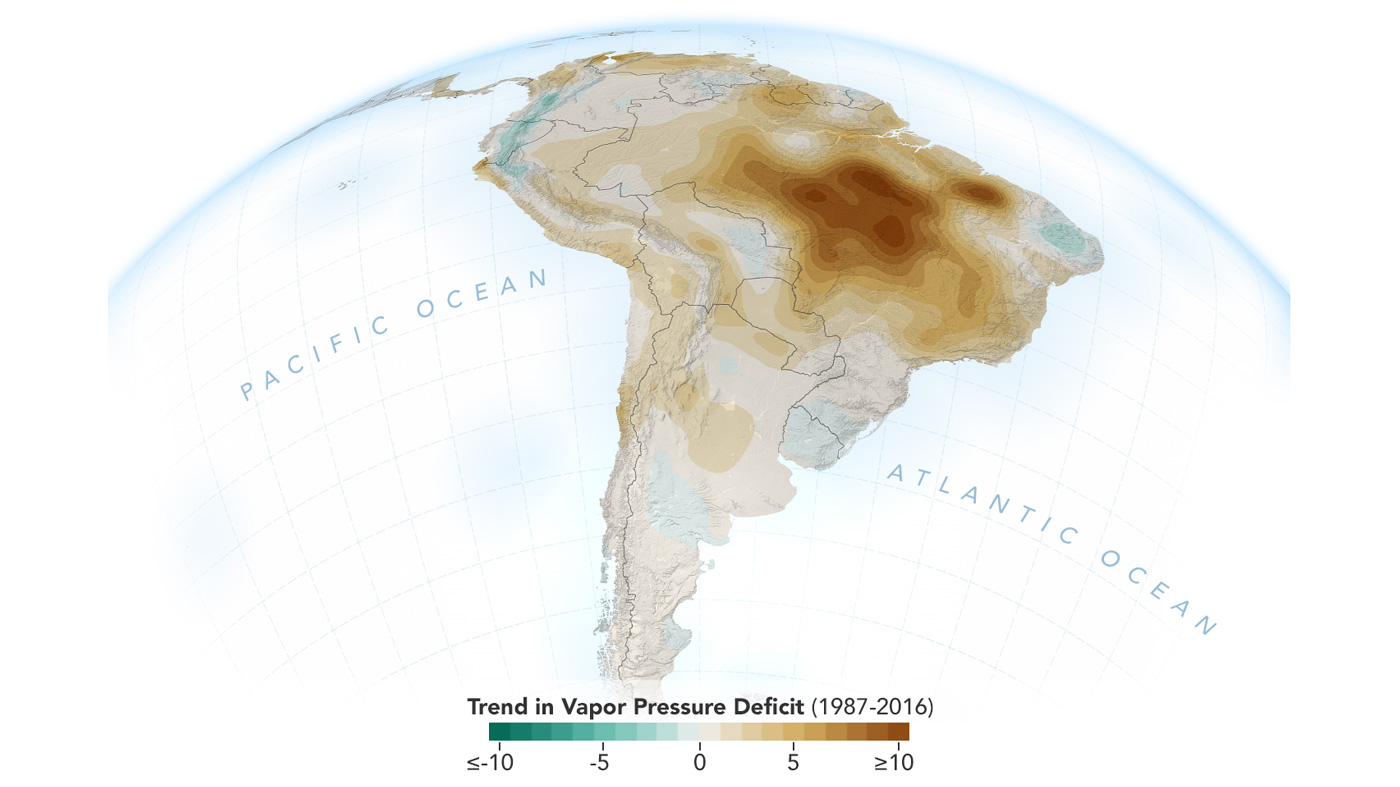 It become a problem when you consider that the Amazon rainforest acts as a huge CO2 processing plant. Its trees absorb literally billions of tons of the gas each year, a process which helps keep the temperatures on Earth down. Dryer conditions, however, mean the rain the trees require to fuel that photosynthesis is in shorter supply, leading to conditions where the forest is unable to sustain itself.

According to the researchers, while half of the blame can be laid at rising greenhouse gases, that doesn’t mean humans are off the hook for the rest. “In comparing this trend to data from models that estimate climate variability over thousands of years, we determined that the change in atmospheric aridity is well beyond what would be expected from natural climate variability,” Barkhordarian says.

Human activity, particularly clearing forested areas so that they can be used for agricultural purposes like crops and animal grazing, are a significant risk, it’s suggested. The most significant and systematic drying of the atmosphere was observed in the southeast region of the rainforest, which is where deforestation is most active. Episodic drying has been observed elsewhere, however, in areas where typically there would be no dry season. If left unchecked, the rainforest itself could simply begin to shrink and die out, leaving no natural way to deal with the vast quantity of carbon dioxide being released into the atmosphere.

Meanwhile, other NASA data has identified concerning shrinking in glacial ice. Again, that’s nothing new, except that Taku Glacier – just north of Juneau, Alaska – has not shown signs of retreating so far. According to Nichols College glaciologist Mauri Pelto, it’s the last remaining glacier to withstand melting – or, at least, it was. 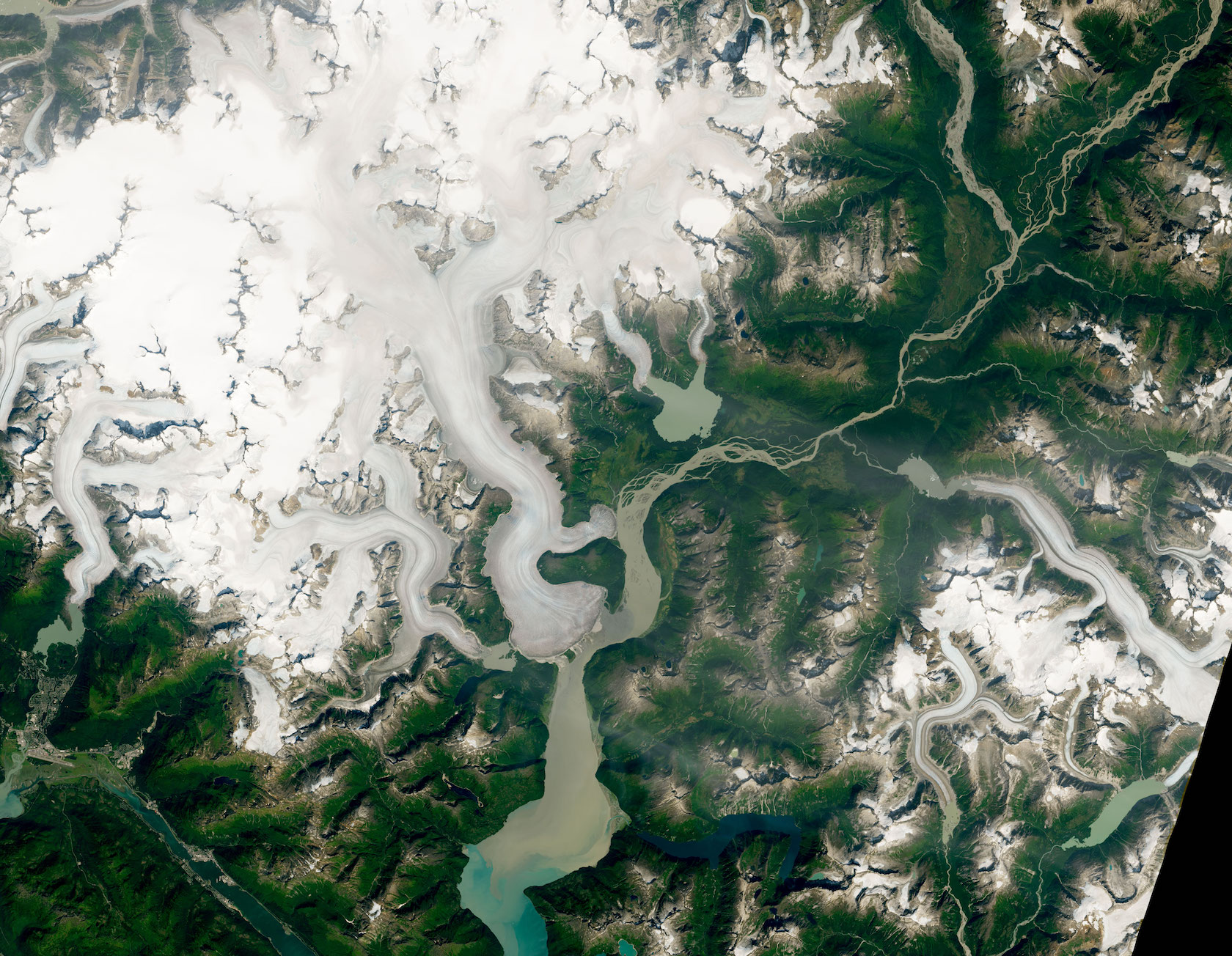 Using imagery captured by NASA’s Operational Land Imager on Landsat 8, changes in the boundaries between Taku Glacier and the river have been identified. At 4,860 feet from surface to bed, Taku is one of the thickest known alpine glaciers in the world. It was also, up until around 1988, actually gaining mass and advancing.

From 1989, though, that thickening slowed significantly. From 2018, Taku began retreating – coinciding, Pelto points out, with Alaska recording record summer temperatures.

“To be able to have the transition take place so fast indicates that climate is overriding the natural cycle of advance and retreat that the glacier would normally be going through,” Pelto concludes. “Taku Glacier is being exposed to melting it hadn’t before, which will drive new changes.”

Some of those changes could be significant in their impact on life on Earth. Earlier this year, scientists predicted that if left unchecked, climate change could lead to a 6.5 foot rise in ocean levels by the year 2100.