Twitter and Instagram are battling over mobile photo-sharing, and it is a story that has been long running. Back in December of 2012, Instagram changed the way its photos showed up on Twitter so that the latter’s users are forced to click a link and view the images on Instagram’s own site/app. For its part, Twitter has made filters available to users for sprucing up photos and making it more appealing to post images directly in tweets rather than through a different service. Now Twitter is upping its game.

Twitter has started prodding its biggest users away from using Instagram to share images in tweets, showing them a message when they do that instead directs them to Twitter’s own photo features. The message comes in the form of the pop-up shown below, which surfaced by way of Mashable. 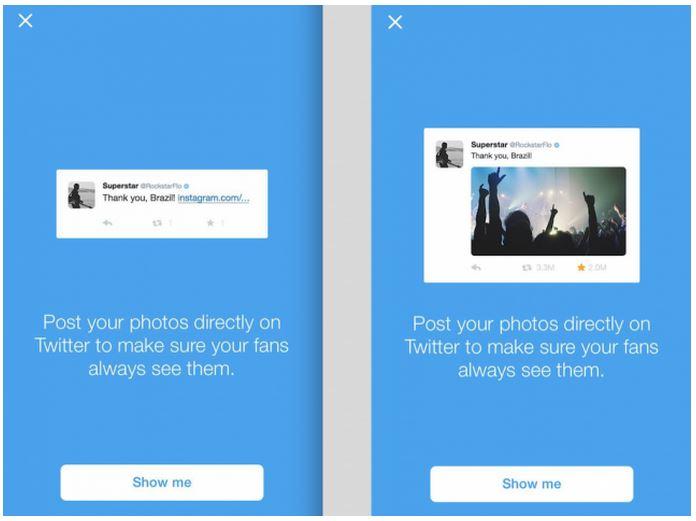 Top users on Twitter have started seeing the pop-up today, and according to a source that spoke about them, the message serves as an “educational effort” to get celebrities and others with a bit of public influence to gravitate away from Instagram in favor of directly sharing images.

When Twitter’s native image editing is used and photos are directly tweeted, users will see the images in their news feed. When an Instagram image is tweeted, only the link to it will show up, requiring users to take the extra step of clicking to see them on Instagram’s site.