The alpha version of the application Tweetbot for Apple computers running OS X has been released to the public today. This application has been a user favorite in its iOS version for iPhone, iPad, and iPod touch for over a year now, and the folks creating that app are just about ready to push it to the desktop as well. The release coming today (out now, as it were) is just an alpha version meaning there very well may be some bugs to be worked out – but you can grab it right this instant!

This version will be missing features like multiple windows – which you can currently get to with command-shift-n – but this and other bits like actual developer support will be much more smooth (or existent) in future versions. You wont get Notification Center or iCloud support here, and there may very well be some graphics issues (as Tapbots describes here).

You’ll be getting periodic updates as the app continues through alpha and beta modes, and the final version (version 1.0) will not be free. They’ve not yet decided how much this app will cost, but you’ll be able to use this pre-release version until then – so have at it! 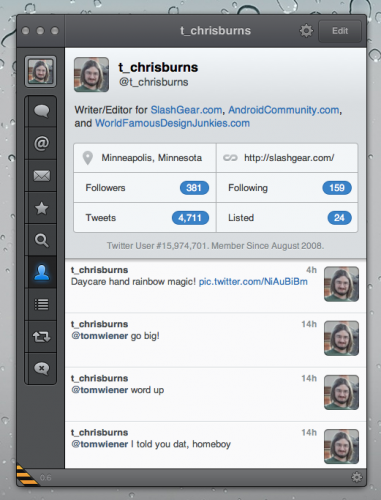 Everyone using Mac OS X 10.7 and above for now, but the final release will only work with OS X 10.8 and above with full Mountain Lion compatibility being a must. You can download this pre-release alpha version from Tapbots right here: [download with care!]