It’s fair to say that Facebook’s Aquila drone hasn’t had an easy time in early trials to get the internet-broadcasting unmanned craft safely into the air and back down to the ground again. After a successful first flight in July 2016, which saw a full-sized version of the drone design take to the skies for the first time, the social network’s ambitions were brought swiftly down to earth later in the year. A crash-landing in December suggested not all the issues had been successfully ironed out.

Facebook’s ensuing investigation into the crash ended up blaming it on strong winds, and it’s the lessons learned from that which have shaped Aquila’s second successful full-scale flight. That took place on May 22, the company has revealed, and again saw the wing-like drone take off, cruise, and then come back down to the ground in a single piece.

In a lengthy report on the flight, Facebook details each of the changes and experiments it did to address wind stability. The engineers added “spoilers” to the wings, for instance, which cut lift during the approach to landing by increasing drag, just as they do on a sportscar at the track. The whole finish of the plane had been smoothed out, too, and there’s now a horizontal propeller-stopping mechanism, which kicks in during landing.

“This second flight was all about data,” Facebook’s Martin Luis Gomez explains. “We flew lengthy test points at constant speed, heading, and altitude to measure the airplane’s drag. The data from these “trim shots,” as they’re called, will be used to refine our aerodynamic models, which help us predict the energy usage and thus optimize for battery and solar array size.” 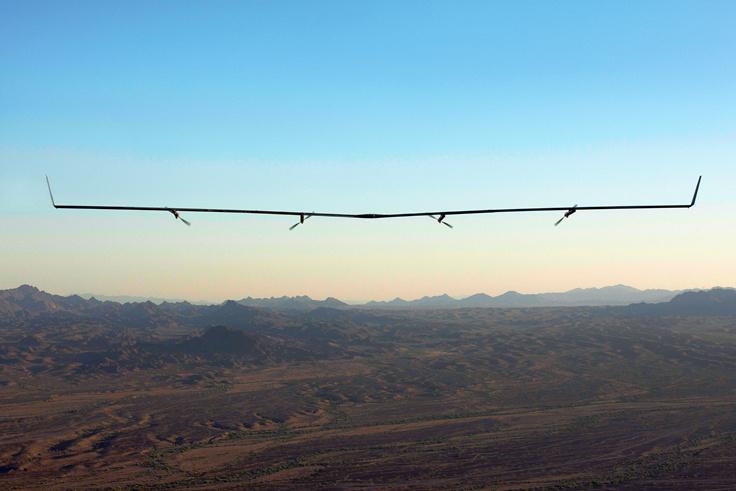 As a result, this latest iteration of Aquila was filled with hundreds of sensors to track the impact of the changes. The autopilot software was a new version, and there were new radios for the communication subsystem. As you might expect, Facebook bakes in extra radios for redundancy during flight.

While the successful landing is reason alone to celebrate, this new trial had other high points. For instance, Facebook says that after take-off Aquila climbed at nearly twice the rate of the first full-scale test: 180 ft/min. It’s crediting the smoother finish for that, among other factors.

A maximum altitude of 3,000 feet was reached, and a speed of around 10-15 mph. That’s by design, of course: Aquila is intended to be frugal with power, since it’s reliant on batteries and solar panels, and its goal is to blanket a specific area below with internet service. Facebook’s intent is to use it as a way to expand coverage without physically-installed infrastructure.

Next up, the Aquila team says, is sifting through all that data collected and figuring out how to improve things for the next test flight. That’ll include looking at results from stress sensors, exploring how prolonged time in the air – and the forces involved – put strain on the aircraft’s body, and how that can be minimized with weight-economical design.