Trump’s technology meeting: business and government, all in one

In the opening few minutes of Donald Trump’s technology leaders meeting this afternoon, it was clear: this President Elect plays favorites. “I’m here to help you folks do well,” said Trump, “and you’re doing well right now, and I’m honored by the bounce. They’re all talking about the bounce, so everybody in this room has to like me at least a little bit, but we’re going to try to have that bounce continue.”

“And perhaps more importantly we want you to keep going with the incredible innovation,” said Trump. “There’s nobody like you in the world. There’s nobody like the people in this room – and anything we can do to help this go along, and ah… we’re going to be there for you and… you’ll call my people, you’ll call me, it doesn’t make any difference. We have no formal chain of command, around here.”

Trump also suggested that “we’re going to do fair trade deals and make it a lot easier for you to trade, uh, across borders because a lot of restrictions are the problem, I think you’ll see. And if you have any ideas on that, that would be great. Because that, uh, there are a lot of border restrictions and a lot of border problems- you probably have less of a problem than some companies…”

One day Trump suggests that he’ll be increasing taxes on imported goods manufactured outside the USA. Another day he says – to these technology titans – that he’ll get rid of restrictions on trading across borders. What’s it going to be? 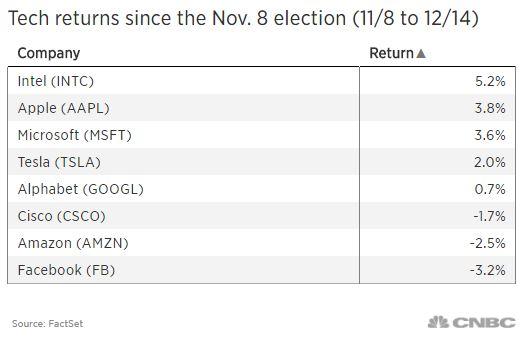 Above you’ll see a list of tech returns since the election earlier this year via CNBC. The “bounce” you see Trump brag about is not actually something that exists in reality.

It’s been suggested that Musk and Cook will stay longer than the rest of the meeting’s attendees for extra discussion. It’s not clear what this added discussion will be about, nor is it clear how these companies will benefit from Trump’s attention.

Missing from this list are quite a few big names in technology, but as Trump suggests, Peter Thiel said they weren’t big enough. Peter Thiel is a co-founder of PayPal and apparently has Trump’s ear at this time.

We’ll be following up with an additional report once the meeting is adjourned and more information comes to light. Stick around our Entertainment portal for more on this administration through the future.