Toyota has revealed its latest plans to get the cars of tomorrow talking to the road, each other, and smoothing out driver-error for safer transportation, with the launch of the Intelligent Transport System test site. A near nine acres of replica roadways in Japan, the ITS Proving Ground is equipped with a road-to-vehicle communications system that alerts compatible cars to nearby pedestrians, other cars, traffic signals, and more. As well as increasing safety, the wireless tech could also be used to maximize fuel efficiency.

The test ground is part of Toyota’s work on car communications, whether that be the road (and road furniture, like traffic signals) talking to your car, or cars talking between themselves. Operated on the 700MHz band, which has broad range thanks to its easily-diffracted signal, the wireless tech will be able to warn of poor road conditions out of the driver’s line of sight, pedestrians in the road, and even the pattern of traffic signals, allowing the car to pre-empt slowing in a more fuel-efficient way. 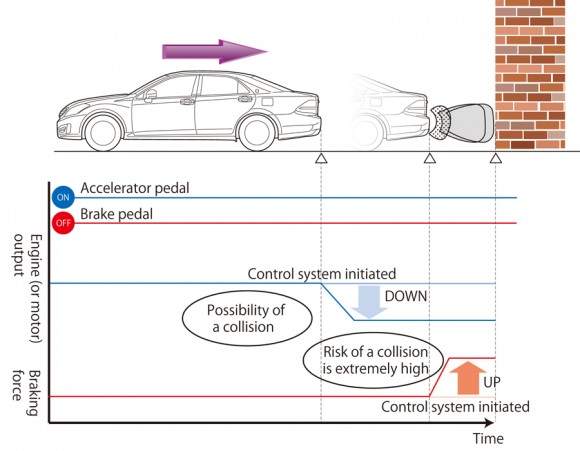 Meanwhile, even objects that can’t talk to your car – such as brick walls – can be made safer, using Toyota’s Intelligent Clearance Sonar. That monitors objects around the car, and automatically applies the brakes, as well as reducing engine power and sounding an alarm to warn the driver. It works in tandem with Drive-start Control, which can cut power if an auto-transmission is shifted between reverse and drive in a situation of driver panic.

“For example,” Toyota explains, “if while reversing in a parking lot, a driver unexpectedly strikes an object, the driver may become startled and shift gears from reverse to drive while continuing to press the accelerator.” The Drive-start control system would step in at that point.

As for crashes at higher speeds, there’s Toyota’s new Pre-collision System (PCS) with a promised 90-percent effectiveness at preventing rear-end collisions. Effective when the speed difference between the two vehicles is under 37mph – such as when you’re driving at 50mph, and the car in front is going at more like 12mph, Toyota suggests – the PCS can automatically slow the car with brake assistance, whether the driver has applied them manually or not.

The PCS uses millimeter-wave radar to track the distance between cars, and can apply twice the braking forced of the driver on their own. If both driver and PCS are braking, Toyota says the system enable deceleration of up to 37mph; if the driver isn’t braking, that’s cut to 9-19mph effectiveness.

Both Intelligent Clearance Sonar and Drive-start Control are set to appear “in upcoming vehicles” Toyota says, though there’s no timescale for their inclusion. PCS, meanwhile, will arrive “starting with soon-to-be-launched models” Toyota teases. 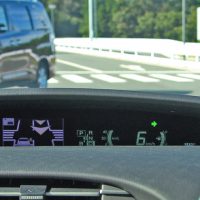 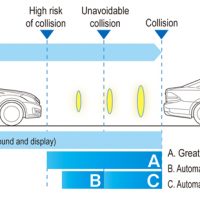 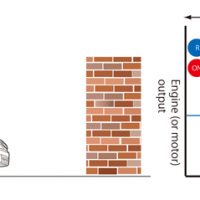 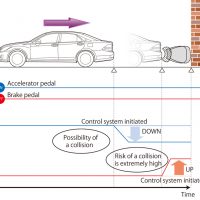