This past week we had the opportunity to have a chat with Bryan Cranston on his role in the 2012 science fiction action thriller Total Recall and how his role in the hit TV series Breaking Bad has all but skyrocketed him into the public eye. So well liked is the TV series that it ended up being spoken about at the press junket for Total Recall with the actor as much as the film was – but Cranston, ever the gentlemen, made no qualms about speaking on whatever the press had on their minds. How did the “goofy, silly, fun-loving dad” from Malcolm in the Middle transform himself into a science fiction villain with a methamphetamine dealer/science teacher in-between? Have a peek!

[Q] Len Wiseman [director of Total Recall 2012] brought up that he’d seen Breaking Bad [see the rest of that interview here] and said, ‘I want to work with this guy.’ Is that the common thing for you now, has that show changed your image in the business from the comedy guy only?

[Bryan Cranston] Yeah, I have ridden the hard work and sweat of Vince Gilligan all the way to another level. The best thing a director can do is to identify good actors and fit them in the right parts, and if you can do that in your pre-production, once you get to production you can let them fly, and let them feel safe to be able to experiment and try things. You’ll find happy accidents. 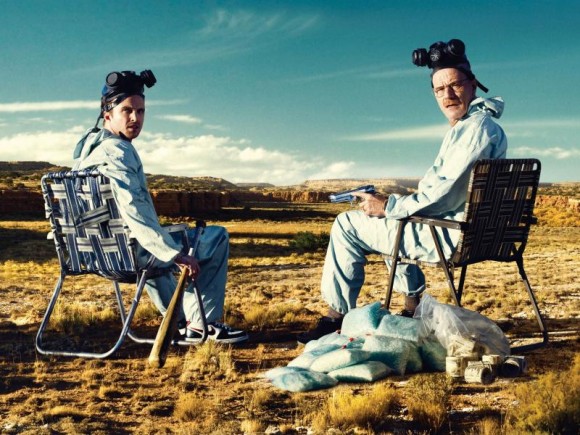 Above: Cranson (right) taking on a very different role in the television series Breaking Bad in which he plays a chemistry teacher with terminal cancer and a meth-cooking business

[BC] For an actor what I try to teach young actors – the best thing they can learn is to identify well-written material. The writing in our industry, in a story, is the most important element, bar none. It is always about the writing first.

So what I’ve been able to do – the thing I’m good at, really, is to identify well written material. Now that doesn’t mean the product is going to end up that way. It’s a recipe – and sometimes it doesn’t work – and you’re thinking, ‘oh well, wait a minute, I had all the ingredients, how did this happen?’ That’s going to happen. 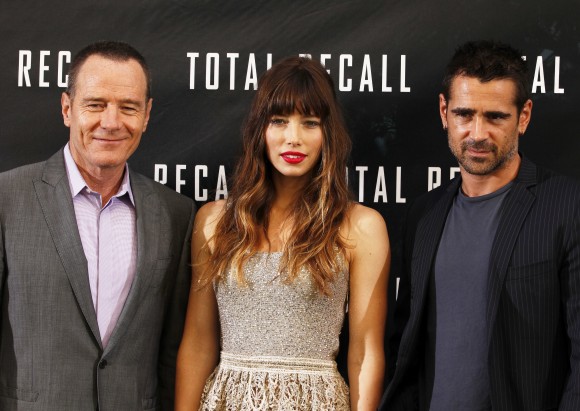 Above: Cranston poses with co-stars Jessica Biel and Colin Farrell at the Los Angeles press junket for Total Recall

[Q] You had this in you all the time, even before Breaking Bad, but people’s perceptions of you have changed. Have you thought about that since – Drive, and this, you’re given harder-edged characters and just a straight jacket perception of what your previous roles would be?

[BC] Well, the only thing that an actor really yearns for in a career is opportunity. We don’t ask to be given roles – [if you don’t] just give me a chance to get in the room, we have no shot. How I got Malcolm in the Middle – everything – what I try to teach young actors is that, ‘please know, that without a healthy dose of luck, you will not have a career.’ How do you do that? I don’t know. Just keep working, keep working hard, have faith, and this is your life!

[aquote]Without a healthy dose of luck, you will not have a career.[/aquote]

Don’t give yourself some arbitrary number – ‘I’m going to give it a year – I’ll give it a good year’ – it’s like ‘stop now, go back to Idaho.’ You know? ‘Make some really nice potatoes. People will appreciate that.’ But it’s a joke – people, you’re either in this or you’re not in this. So that’s the first thing I say. But I was lucky to get Malcolm in the Middle. I was lucky to get Breaking Bad. And I have stories for those – but I don’t want to go in and monopolize that. But I know – the stars were aligning.

After you are able to get some level of success, like Malcolm in the Middle – seven years of doing a comedy – I got offers to do a goofy, silly, fun-loving dad. And had I taken those, I would have helped pigeon-hole myself as that guy.

You better – you better – if you’re on a hit show? You better save your money. You better, because you need to say no to those tempting offers of dollar bills to do the same thing you just did. To me it was no temptation. I just said no, I just did that. But you don’t know what’s going to happen next. I was very fortunate.

This is but one of several segments of the ongoing set of talks we had with the stars and director of Total Recall – stick around in our [Rekall portal] to see the future and past of the film as it rolls out in theaters this weekend! And of course don’t forget to check out our full movie review of Total Recall (2012) as well!