Niche or nonsense? That’s the question we find ourselves asking about the new Toshiba Satellite U840W, a 14.4-inch ultrabook with a bizarre 21:9 “cinemascope” widescreen display. Running at 1792 x 768 resolution, the U840W – to be known as the U845W in the US – comes preloaded with a custom Toshiba app that automatically scales two apps to run side-by-side.

That way, Toshiba tells us, you can have a regular 16:9 widescreen movie playing and still have a 5:9 aspect app down the side, ideal for keeping up with mid-movie Twitter chat. The display itself uses LED backlighting, and there’s harman-kardon speakers and SRS Premium Sound 3D together with an HDMI output for using a bigger display.

Unfortunately, you’ll have to be buying your widescreen movies digitally, since the U840W lacks an optical drive of any sort. That’s sacrificed in the name of a compact chassis – 368.5 x 200 x 20.8 mm and 1.57kg – finishes in brushed metal and with an optionally-backlit chiclet keyboard. 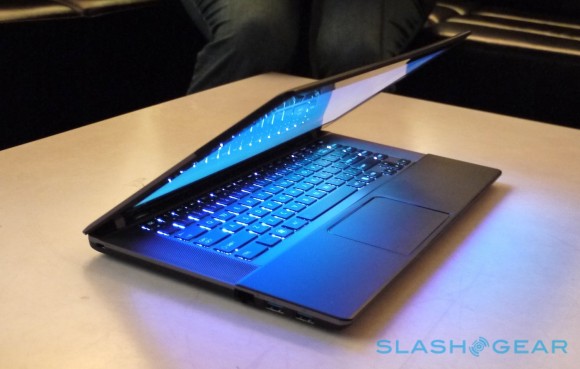 Connectivity includes WiFi b/g/n, Bluetooth 4.0, Intel WiDi, three USB 3.0, ethernet and a multi-format memory card reader, while storage uses a combination of a 500GB HDD and a 32GB SSD for faster loading of Windows. Up to 10GB of DDR3 memory can be installed, together with a choice of ultrabook-centric Ivy Bridge Intel processors.

Meanwhile, the Toshiba Satellite U840 looks mundane in comparison, a relatively straightforward ultrabook with a 14-inch display and 8hr battery. It too has Ivy Bridge processors, HDMI and WiDi, along with a combination of USB 3.0 and USB 2.0 ports and audio in/out. 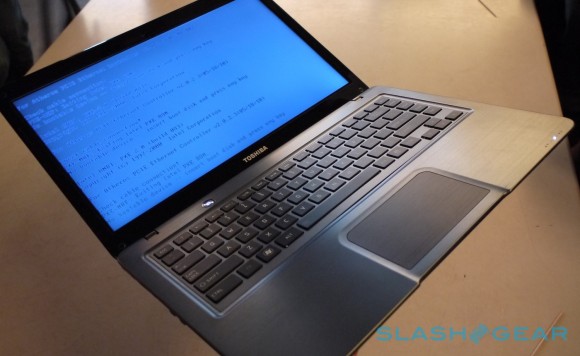