Acer isn’t the only one with touch on the brain today, with Toshiba outing a range of new Windows 7 laptops of which two offer a multitouch display.  The Toshiba Satellite U505 Touch (U505-S2980-T) and Satellite M505 Touch (M505-S4990-T) have 13.3-inch and 14-inch displays respectively, both use Intel’s Core 2 Duo T6600 2.2GHz processor with 4GB of memory (8GB max) and pack 500GB hard-drives.  Toshiba also load on their own touch-friendly software, including the Bulletin Board organizer and digital media display, and the ReelTime timeline-based history.

The usual drag, pinch-zoom and rotate gestures are supported, thanks to Windows 7.  Both machines have a slot-loading DVD burner, HDMI port, S/PDIF digital audio output, WiFi b/g/n and 10/100 ethernet, together with an eSATA/USB combo port (supporting sleep-and-charge for rejuicing gadgets while the laptop is sleeping) and two USB 2.0 ports. 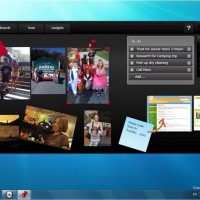 “The performance and functionality in Windows 7 has enabled us to deliver the features that consumers want, such as touch and Fast Sleep-and-Resume, in affordable mainstream laptops,” said Carl Pinto, vice president of product development, Toshiba America Information Systems, Inc., Digital Products Division. “We are applying our expertise in tablet PCs to bring an intuitive touch experience to laptops built for mobility – so customers can easily interact with their media on the go.”

New Ways to Interact
Users now will have a new choice in ways to interact with their laptop, whether flicking through photos, shuffling files, browsing online or playing games, utilizing Windows Touch-enabled functionality. The new Satellite M505 Touch and Satellite U505 Touch laptops let users tap, drag-and-drop and scroll through files, Web pages and images.

· Bulletin Board – Gives users fast access to day-to-day activities, tasks and projects in a simple, visual and fun way. Get creative when organizing projects with the ability to drag and drop photos, videos, links, documents and applications into one place. Personalize and organize the board by moving, rotating and resizing using gestures to fit personalized style. Bulletin Board also includes several built in gadgets such as labels, calendars, a clock and a to-do list.
· ReelTime™ – Helps users easily find files based on when they were opened with a simple, fun visual history. With the flick of a finger, quickly scroll through automatically generated previews of documents, photos, videos and more, filter by file type or use the calendar to go back weeks or months.

Simplified Desktop, Faster Boot
Toshiba will also deliver a simplified, clean desktop on all new Windows 7 laptops. Out of the box, customers will simply have the Recycle Bin on their desktop and minimal software running in the background like anti-virus on startup. As a result, startup, shutdown and Fast Sleep-and-Resume performance will be improved. Customers will also experience longer battery life, as a result of several power conservation improvements in Windows 7, such as a reduction in background activities, which enable the laptop’s processor to remain idle more often and intelligent screen brightness optimization.

More information and detailed specifications about the Satellite M505 Touch laptop can be found at laptops.toshiba.com/laptops/Satellite/M505.

More information and detailed specifications about the Satellite U505 Touch laptop can be found at laptops.toshiba.com/laptops/Satellite/U505.