The Toshiba Satellite P740 Series is focused on delivering excellent on-the-go multimedia and entertainment performance. Laptops in this series are 14-inches for easy portability while still providing ample space for movie viewing on its HD widescreen display. Add to that great audio quality with Harmon/Kardon stereo speakers as well as Dolby and Waves audio enhancement technologies. The model we had the opportunity to test out is the P745-S4250, which sports the latest Intel Sandy Bridge chip and retails for $779.99. Continue after the cut for our full review.

The series comes in configurations with either the latest Intel Core processors or with an AMD A6-3400M processor. Our P745-S4250 model is configured with an Intel Core i5-2410M with Mobile Intel HD Graphics. The processor clocks in at 2.3GHz and can go up to 2.9GHz with Intel’s Turbo Boost technology. The laptop also boasts 6GB of DDR3 1333MHz RAM, a 750GB HDD with 5400 RPM, and a DVD SuperMulti optical disk drive.

The P745-S4250 comes in what’s branded by Toshiba as a Fusion X2 Finish in Platinum, and it is essentially gray with three-dimensional striations. The surface texture is stylish but also allows for a better non-slip grip on the laptop. However, the majority of the laptop is plastic, allowing for a lot of flex in the display, making it feel flimsy and a tad on the cheap end.

The same finish on the lid can be found on the palm rest where there is a multitouch trackpad that supports pinch, swipe, rotate, and scroll gestures and includes two physical buttons as well. The finish also continues through the keyboard area where there are black chiclet-style isolated keys that look slick and the typing experience feels solid. However, the two physical trackpad buttons could use less resistance, as they are quite straining to press and the rough texture of the trackpad may provide more accurate tracking but is also less comfortable to use. 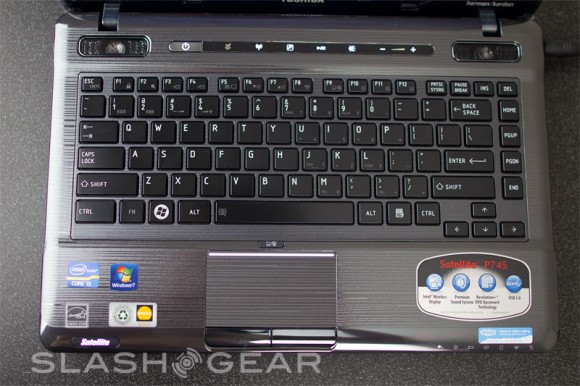 There is an extra row of touch-sensitive buttons above the keyboard for shortcut keys and multimedia controls. Flanking both sides of this top row are Harmon/Kardon stereo speakers, which utilize both Dolby Advanced Audio as well as Waves MaxxAudio 3 audio enhancement technologies.

The 14-inch TruBrite LED backlit display has a 16:9 aspect ratio and supports 720p HD with its 1366 x 768 resolution. A standard webcam and mic for video chatting are embedded in the bezel of the display. 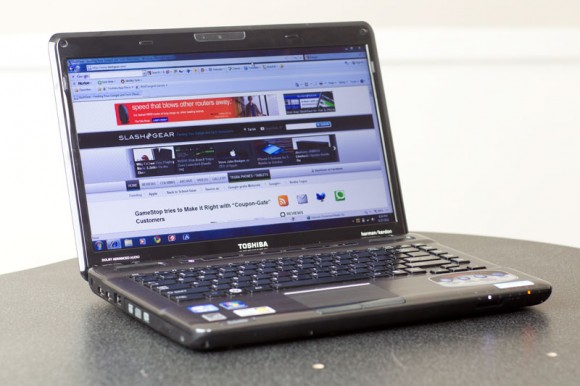 As for connectivity and ports, the P745-S4250 features WiFi, but surprisingly no Bluetooth. Other ports include an RJ45 Ethernet port, two regular USB 2.0 ports, and one special USB 3.0 port with Toshiba’s Sleep-and-Charge feature that lets users charge other devices via USB through the laptop without needing to power on the laptop.

Additionally, it has a slot for a security cable lock, SD card reader, headphone jack, and microphone jack. But something unique about the microphone jack is that it supports Toshiba’s Sleep-and-Music feature that lets users plug in media players to use the laptop’s Karmon/Hardon speakers without needing to power on the laptop.

The P745-S4250 runs Windows 7 Home Premium (64-bit) and comes with the Microsoft Office Starter 2010 bundle as well as the Microsoft Windows Live essentials like Photo Gallery, Messenger, Mail, Writers, and Movie Maker. It also has a slew of preloaded applications that add a bit more bloat, including Toshiba Face Recognition, Toshiba Upconvert, Toshiba App Place, Toshiba Bulletin Board, and Toshiba Service Station, to name a few.

Using the synthetic benchmarking tool Geekbench to measure the laptop’s performance, we found that the P745-S4250 achieved a score of 6434, which is higher than the Acer Aspire 5830TG that’s also a recent laptop we reviewed sporting an Intel Core i5-2410M processor. But, the Acer laptop does have a slightly larger 15.6-inch screen.

The display quality on the P745-S4250 is decent but viewing angles are not so good. Colors get distorted rather quickly when tilting the screen or moving to either side. Audio, however, is full, deep and quite loud without getting tinny. Toshiba’s Sleep-and-Music jack that lets you plug in your mp3 player to use the laptop’s speakers without powering on the laptop is also a neat feature for power-saving on-the-go entertainment use.

The P745-S4250 utilizes a 48Wh 6-Cell Lithium-Ion battery with an overall battery life rated for up to almost 6 hours. This aligns with our own battery test, which involved playing a DVD at 100% brightness and 100% volume. Power management comes in two options of “Balance” and “Eco,” with our battery test using the higher consumption “Balance” mode. About an hour after the start of the movie shortly following boot-up at 100% battery charge, there was still 75% battery life remaining.

The Toshiba Satellite P745-S4250 has plenty of processing power with its Intel Core i5-2410M processor for all your work, multimedia and entertainment needs and comes in a nice portable size of 14-inches. With a large 750GB hard drive and about 6-hours worth of battery life, this laptop should make a decent travel companion. It also boasts great audio sound with its Harmon/Kardon stereo speakers with Dolby and Wave audio enhancements. But priced at $779.99, the build doesn’t feel as solid, the trackpad design could be improved for better comfort, and Bluetooth support is oddly missing.