Toshiba’s clever new 3D laptop, the Qosmio F750 3D, only got official this morning, but SlashGear stopped by for some early playtime to see just how well the glasses-free display worked. Built around a Core i7 processor, 6GB of DDR3 memory and NVIDIA GeForce 540 GT graphics, the F750 3D is no slouch in terms of performance, but it’s the display – capable of simultaneously showing 2D and 3D pictures, tailored to where you’re sitting in front of the notebook – that’s the star of the show. Check out our hands-on impressions after the cut.

Toshiba was showing pre-production samples, so we can’t take too much away from the build quality, but the glossy casings were typical for the company’s laptop range. Styling is sober, with some red touches going a little way to brightening things up, but within seconds the F750 3D was a mess of fingerprints and smears. Still, the full-sized keyboard – complete with separate numerical keypad – was spacious, and the trackpad decently scaled.

The glasses-free 3D system relies on the HD webcam above the display to spot the viewer, identify their eyes and then adjust the picture – in fact two pictures, one for each eye – shown on the 1920 x 1080 display behind a layer of lenticular film. We’ve seen lenticular 3D before, of course – the Nintendo 3DS uses it, as does HTC’s EVO 3D – but generally on small-screen devices, not 15.6-inches like the Qosmio. 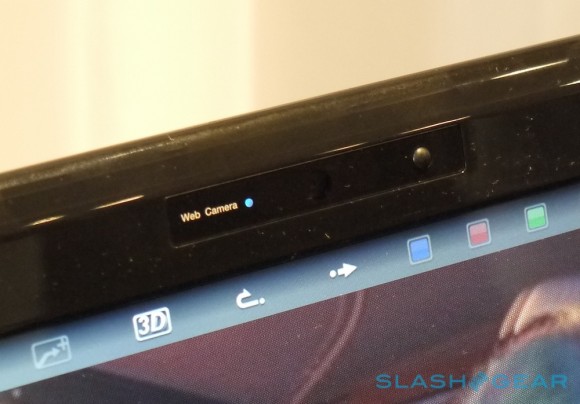 Toshiba’s boast is that its tracking can spot the user almost instantly, and immediately turn on the 3D graphics. In practice, the switch from 2D to 3D did come quickly, and the effect was generally preserved as we moved around in front of the display. However, the 3D itself felt relatively underwhelming in comparison to the better TVs using active or passive glasses technology: in the F750 3D’s case, it looked more like four or five layers of stacked images with some depth between them, rather than a smooth depth transition. Upscaled 2D content demonstrated this more than native 3D footage, but both lacked the refinement of glasses-based systems.

More frustrating were the times when the tracking system seemingly lost us, the picture flicking back to 2D momentarily before it could get a new fix. There were several people milling around in the background at times, which could have been confusing the webcam, but we’d argue that’s entirely possible during real-world use as well. In addition, there’s no support for multiple people to view the 3D screen at once. 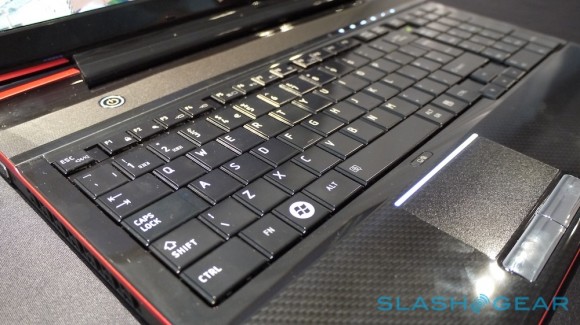 Many have suggested that, before 3D comes of age, our TVs will have to be glasses-free in order to bypass the specs frustration. Toshiba has been pushing hard with the technology: it already has glasses-free TVs, albeit relatively small ones, on sale in Japan, though sales have reportedly been underwhelming. The problem the Qosmio F750 3D faces is that it’s a decidedly singular experience – one viewer at a time, if you want to see 3D – and we’re not sure the graphics pros and designers Toshiba is targeting will see sufficient benefit to warrant the heady price tag (£1,300 when it lands in the UK early next month).