We just got through with a hands-on look at Toshiba’s latest ultrabook, this time an unnamed prototype model with a 14 inch screen. The notable thing about it isn’t the hardware (which, we admit, is pretty awesome) but the early version of Windows 8 that’s running on it. Have a peek below and see what Toshiba has in mind for 2012.

After a little fumbling, we managed to find our way into the “old” Windows 7 desktop and locate the specs of the Toshiba machine. The laptop runs on a mere 1.3Ghz Corei3 processor and 4GB of RAM. Toshiba’s graced it with a 128GB SSD drive. The Windows 8 interface runs on integrated graphics, though we couldn’t determine what kind. This is extremely early hardware, so things may be a little sketchy as far as the OS reporting goes.

We know that Windows 8 will run on current-generation hardware, and for the most part, that’s what we’re seeing. But we were surprised at just how well it did. Obviously there’s a user interface barrier to overcome, especially since Windows 8’s gestures weren’t working on the laptop’s trackpad. (This will absolutely be fixed long before a final version of either the software or the hardware hit shelves.)

In the meantime, we’ve got a good idea of how well Windows 8 handles even relatively light hardware. It leaves us with a lot of hope for later this year, when Windows 8 machines of all shapes and sizes – and perhaps most importantly, ultrabooks and tablets. Check out our full hands-on with this prototype ultrabook as well for good measure. 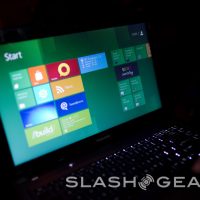 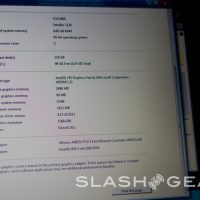 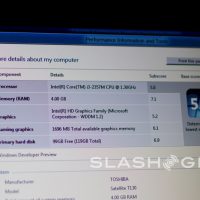 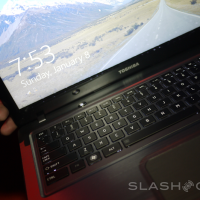 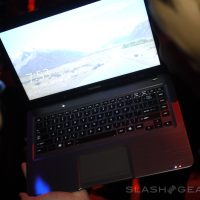