Ultrabooks have turned up in force at Computex 2012, and Toshiba isn’t in the mood to be left out. The Toshiba Portégé Z930 – aka the Satellite Z930 – is a 13.3-inch ultrabook using Intel’s 3rd Gen Core processors, and measuring a scant 8.3mm thick at its thinnest point.

Despite the dimensions – which include a weight of 1.12kg – the Z930 can run for up to 8hrs on a single charge, so Toshiba claims. It also supports Intel VPro, making it arguably more suited to enterprise users than rival models. 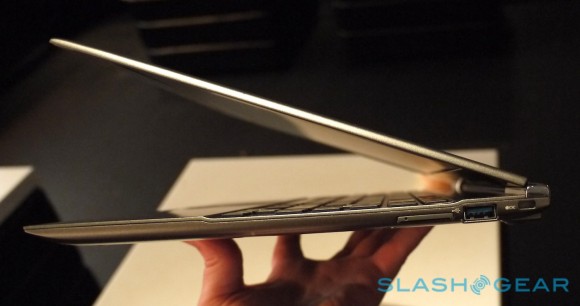 We’re particularly glad to see an anti-glare display, rather than the more traditional super-glossy panels. The keyboard is backlit, and there’s a spill-resistant membrane underneath it so as to help prevent damage from spills. Despite the dimensions, Toshiba hasn’t forgotten the specs: up to 12GB of DDR3 memory can be fitted, along with up to 512MB of SSD storage.