Texas Instruments’ new TI OMAP 4470 series system-on-a-chip was revealed earlier, but they gave SlashGear a special look at the new series at CES. Thanks to various improvements in the architecture and efficiency of its chips, the ARM system has some impressive gain in performance, especially in the gaming sector. Advancements are quite impressive: on one benchmark, the new series showed double the framerate in a 3D environment demo.

The games and applications running on TI’s development tablets were displayed, and included very impressive gaming performance.Framerates and definition were noticeably smoother, even on the relatively simple animation demonstration. On the TI 4460 (the same processor in the Galaxy Nexus and various other high-end smartphones and tablets) got about 24 frames per second, while the new 44670 got a solid 42. Mobile hardware with the new chipset should start appearing sometime in late Q2 2012.

Various software demonstrations from TI’s software partners demonstrated the flexibility of its APIs. A gesture-based cookbook reader (so you don’t have to touch the tablet with dirty hands) was particularly effective, and the same technology was used for a controlling a monster tuck game without touching hardware. A WiFi Direct demonstration beamed 1080p video to a TV module while still having full access to Android’s tablet interface on the host machine, allowing for true single-device multitasking (AKA couch surfing). We’ll look forward to seeing what TI OMAP 5 has to offer in the next generation, which promises to be an even more dramatic improvement. 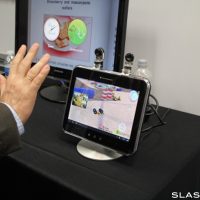 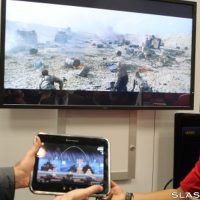 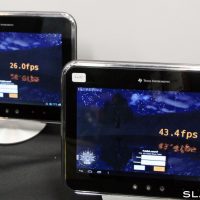 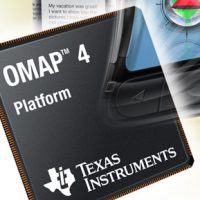