This weirdly wobbling black hole upends our theories of the universe

Black holes are known for being voracious, inescapable, and some of the most impressive elements of the known universe, but what we didn’t realize until now is that they can wobble. New research from the University of Chicago tapped a unique telescope array to track the supermassive black hole at the center of the M87 galaxy, and in the process unlocked a new discovery – and a fresh mystery.

It’s been more than a year since the Event Horizon Telescope Collaboration released an image of that black hole, M87*. However data collected on the supermassive object actually dates back much earlier than that, with archival sets available from 2009 to 2013.

The earlier data is only partial, because it relies on the first batch of telescopes that joined the Event Horizon array. Rather than a single instrument, it’s actually a collaboration across 13 institutes and multiple individual telescopes, which combine their data from different perspectives. By applying the latest analysis techniques to that older data, researchers have been able to pull out new details about M87* and what it’s doing.

“Last year we saw an image of the shadow of a black hole, consisting of a bright crescent formed by hot plasma swirling around M87*, and a dark central part, where we expect the event horizon of the black hole to be,” Maciek Wielgus, an astronomer at Center for Astrophysics and lead author on a paper detailing the new findings.” But those results were based only on observations performed throughout a one-week window in April 2017, which is far too short to see a lot of changes.” 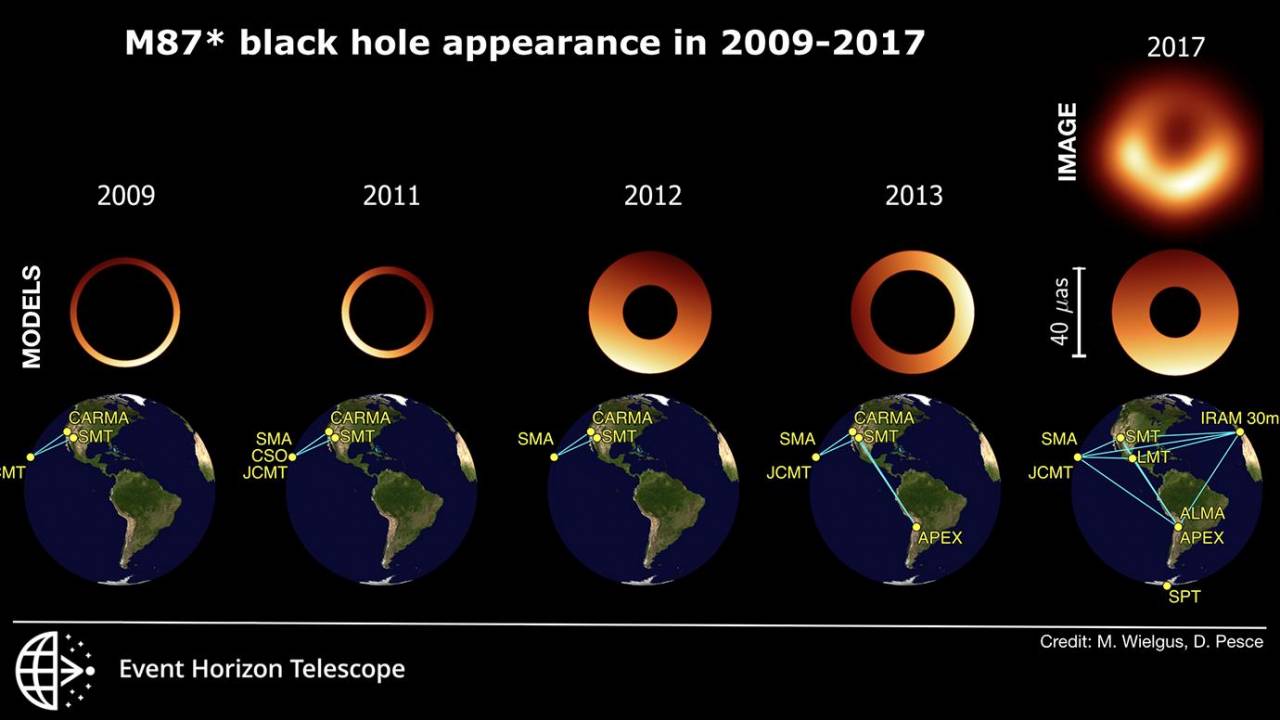 The 2009-2013 data comes from a prototype array, but by applying statistical modeling it was enough to show how M87* had changed over time. On the one hand, it confirms some existing theories. The shadow diameter of the black hole, for example, tracks with Einstein’s theory of general relativity.

However it also unlocked some surprises. Though the crescent ring may be the right size as the theory predicted, what wasn’t expected to happen was a noticeable wobble.

Some of that was predicted by the current theories, as the accretion flow of superheated gas falling onto the black hole ionizes and then becomes turbulent from the magnetic fields. That would explain some visible wobbling, the scientists explain, but not all of it.

“Actually, we see quite a lot of variation there, and not all theoretical models of accretion allow for so much wobbling,” Wielgus suggests. “What it means is that we can start ruling out some of the models based on the observed source dynamics.”

The hope is that the 2018 data, currently being processed, will unlock more details about that wobble and what might be causing it to such an extent. Meanwhile, data collection is due to begin again in March 2021 – the 2020 observational campaign having been put on hold due to weather patterns, the ongoing pandemic, and other factors – with more detail on how black holes evolve expected to be gathered from that.